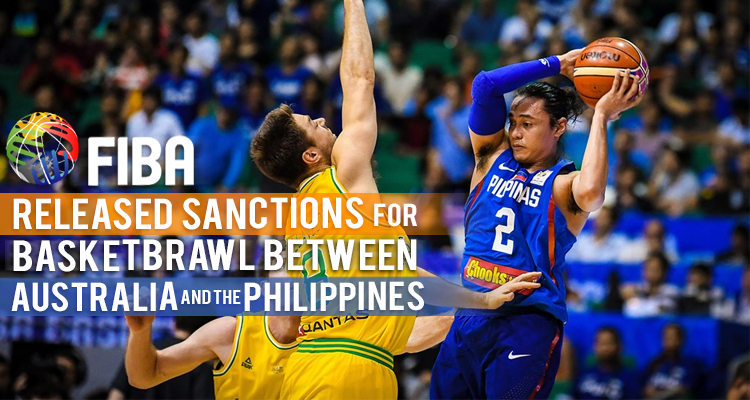 FIBA Released Sanctions for Basketbrawl Between Australia and the Philippines

In an innocent night of watching professional Basketball, the world is left dumbfounded by the sudden qualifying match turned Brawler’s Den with AU versus PH last July 2, 2018.

The Philippine and Australian teams went ballistic over each other. A free-for-all ensued with flying kicks, jumping punches, and even a propelling chair in the third quarter of the FIBA qualifying match.

This resulted in 4 players from the AU team and 9 players from the PH team to be ejected from the game. The game continued with 3 PH versus 5 AU players but only to halt when two more players get fouled out. The game ended with a final score of 89-53 with Australia winning.

The FIBA doesn’t tolerate such acts of unsportsmanlike behavior. After investigations, the sanctions are released last July 19, 2018.

The FIBA also removed the referees officiating the game from the FIBA Elite Program. They are disqualified from any international organized or recognized games by the FIBA for a one-year period.

The sanctions only relate to the remaining games in the 2019 FIBA World Cup Qualifiers. It will not affect NBL or PBA games. And there is no mention of findings with regard to the allegation of racial remarks.

Is the Punishment too Heavy?

It may look like a small amount in number. But remember, the qualifiers are not a weekly game. On the FIBA Schedule, the PH team only has a remaining of 6 games left and the AU team with 5 in their respective elimination round robins.

This means that these suspensions will heavily cripple the teams, with the current standing of 5-1 for Australia and 4-2 for the Philippines. The suspensions indirectly curtail the chances of the teams to qualify.

Additionally, the Philippine team is set to play in their home court closed doors without a crowd for the remainder of the tournament and will be banned from two home games for a probationary period of three years.

Is the punishment too heavy? The fines collected will be used for the ‘Basketball for Good Program‘ by the International Basketball Foundation. Both federations can appeal the decision within 15 days.