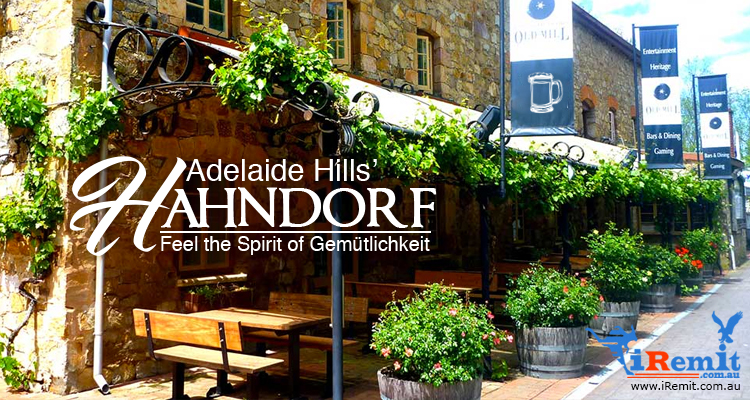 By Serena Estrella in Life in Australia
March 16, 2017

Feel the Spirit of Gemütlichkeit in Adelaide Hills’ Hahndorf

Gemütlichkeit is apparently a German word for a state of friendliness, warmth, and good cheer, and probably describes the feeling you get after a nice cup of hot chocolate (or a tall, cold bottle of beer. Different strokes for different folks and all).

So, what does a German word with no English counterpart have to do with Discovering Australia?

Well, let’s just say that a small town in Adelaide Hills has the unique ability to make you feel, well, gemütlichkeit. It’s called Hahndorf and it looks like your typical picturesque little town, except that it looks like it was transplanted straight out of 19th century Germany.

And in many ways, it was.

The original settlers in the area were originally the Peramangk Aboriginal people, who first called it “Bukartilla” after the swimming hole in the nearby Onkaparinga River, but it was the German Lutheran immigrants who arrived in 1838 who would end up giving the place its distinct character as well as its current name.

On 28 December of that year, a 344-ton ship called “Zebra” arrived in Port Adelaide with 38 German Lutheran families fleeing from religious persecution in their homeland.

Unfortunately, they were unable to disembark from the ship until four days later because the tide wasn’t in their favor. The Zebra’s captain, a Dane named Dirk Hahn, had grown attached to the passengers and thus negotiated a parcel of land for them to settle on in Adelaide Hills.

Thanks to Captain Hahn, the German immigrants were able to create their own little farm town settlement and soon enough, the profits from the sale of their excess produce allowed them to expand their land.

As the town flourished, so too did its architecture and surroundings. Most of the families built German-style farmhouses on their land and as the town grew in size, buildings were constructed using the traditional “fachwerk” design.

Dirk Hahn and the settlers he graciously helped may have long since passed on, but the spirit of gemütlichkeit is very much alive in this German town, and the following are just a few of the sights and sites that ought to warm anyone’s heart:

The South Australian Living Artists (SALA) Foundation holds events all over the country the whole year round, but the one in Hahndorf this year is on an entirely different level. For Hahndorf’s SALA Art trail seeks not just to please the eye but also the heart and stomach.

On this trail, you will not only find quirky works of art and breathtaking natural scenery, but also the warmth of fire-lit pubs serving delicious food and the famed Adelaide wines along the way.

The full itinerary can be found here, so you can go on this trail any time and at no extra cost (apart from the amount of food and wine you might choose to consume along the way).

This school of higher learning not only produced prominent citizens who contributed greatly to local society, but is also home to an exhibit that depicts the earliest days of this German settlement.

Apart from the photos and the artifacts dating back to the Lutheran settlers’ arrival in the 1800’s, the building itself, with its rough brick walls and 19th century architecture, also serves as a visual tribute to the town’s early history.

Hans Heysen was one of Australia’s foremost landscape artists and he had a lifelong love affair with the gum trees that grew in the meadows surrounding Hahndorf.

The artist lived in The Cedars, a splendid 60-hectare property on Heysen Road, and his original Bavarian-style art studio has been preserved so that visitors can gaze at Heysen’s depictions of Hahndorf’s bucolic landscape, all while stepping on the rugs that the artist himself also used while painting.

More than just another lush park to stroll through, these gardens were established in honor of the town’s centenary. Fittingly, the names of all the fifty-two families who first came to Adelaide in the nineteenth century have been inscribed on the gates to this sanctuary, and on your visit to Hahndorf, you will find that many of their descendants still live here.

5. The trees lining the main street.

All three hundred of these cork, elm, and plane trees were planted more than one hundred years ago, and they continue to stand tall and strong, providing both shade and a lovely sight to all who pass through the path underneath their foliage.

Do you like harmonicas, hearty beer, and nutcrackers? How about Oktoberfest “supplies” (e.g., costume-themed aprons, felt hats, etc.)? If so (or if you’re just looking for something unique for the folks back at home), you’ll have a blast gawping around this gift shop. The staff here are garbed in traditional German outfits, and they’ve even got a cuckoo clock maker onsite.

No trip to this town is complete without a stop at one of its warm and cozy inns for some bratwurst and sauerkraut (or perhaps even some hot chocolate topped with sweet, thick schlag or whipped cream. Yum!).

The Haus Hahndorf, the Hahndorf Inn, and The German Arms are just a few of the restaurants serving home-cooked, sumptuous meals made using recipes that have been passed down from generation to generation.

Hahndorf clearly isn’t your run-of-the-mill Aussie attraction, given how the place makes you feel like you aren’t in Australia at all.

But considering how a visit here could save you a trip to a country on the other side of the world (i.e., Germany) while still giving you a taste of its culture and ambience, you could do far worse than allotting a day or two (or three) from your holiday to visit.