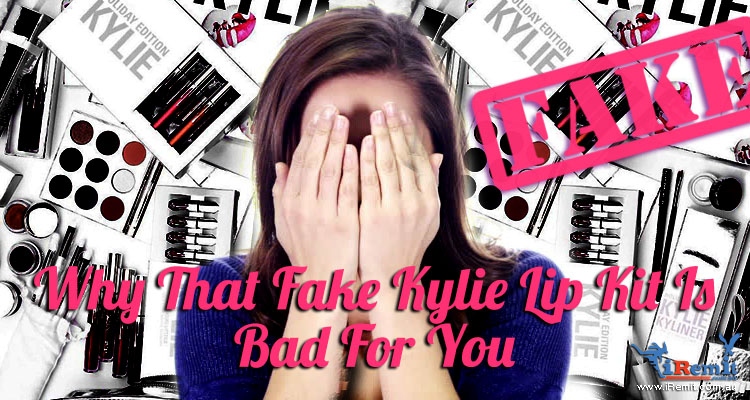 By Serena Estrella in Health and Fitness
September 1, 2017

Why That Fake Kylie Lip Kit Is Bad for You

First, there were counterfeit designer bags. Then, there were pirated DVD’s. (Remember those shady men whispering “Dibidi, dibidi..” while flashing DVD sleeves at you as they walked by?) And now, with the rise of fast-selling Instagram favorites like Kat Von D, Lime Crime, and Benefit, the demand for cosmetics is steadily rising on the black market.

Personally, I have one of those Lime Crime lip velvets myself. It came in a rich, vanilla-scented Pink Velvet shade, and it cost me more than Php1k, so I can understand the appeal of a Php 450 knock-off. I mean, come on, it’s so expensive to be a woman these days, what with all the products we need to make ourselves look presentable (at least according to those Youtube make-up tutorials where you need at least ten products with four-figure price tags each).

However, unlike fake bags, where the worst that can happen is they end up making you look like a tacky wannabe, fake make-up can literally hurt you because you’d be applying it on your skin.

The Internet is littered with horror stories about the dangers of counterfeit cosmetics. One LA-based beauty vlogger woke up with a severe eye infection the morning after she tried a USD6 Kylie Cosmetics Kyshadow Palette (the genuine article costs USD42) from an online seller. Another one endured painful chemical burns from a few swipes of an Anastasia Beverly Hills Liquid Lipstick knockoff, and a Youtuber from Canada experienced numbness in her lips and tongue after road-testing three fake Lime Crime matte lippies.

Despite the recent deluge of imitation make-up products flooding the market and wreaking havoc on the skins of several consumers, counterfeit cosmetics have been around long before Instagram was even a concept.

The cult favorite MAC brand, for example, has been hit hard by knock-offs over the years and has long spoken out about the inherent dangers of such products. This is because they contain harmful or even carcinogenic ingredients, such as 19 times the legal limit of lead. With repeated use, this can build up in the human body, which leads to lead poisoning symptoms like memory loss, joint and muscle pains, and headaches.

Furthermore, when criminal gangs mix up batches of fake make-up, they don’t do so under the same hygiene and sanitation standards that premiere brands operate under. Cosmetics that are made in back rooms and filthy basements are thus crawling with all sorts of nasty stuff, including the E.coli virus, urine, and even fecal matter from unwashed hands. Talk about literally putting sh*t on your face, right?

Thus, while it might be tempting to get that coveted pot of Ben Nye Luxury Banana Powder for only USD3, ask yourself, “Will the potential breakout, scarring, and infection from using a fake be worth the savings?”

No, didn’t think so either. Far better to save up and buy the real thing, or look for safer and more affordable dupes among drugstore brands. No amount of pennies saved is worth permanently-damaged skin or your peace of mind, for that matter.