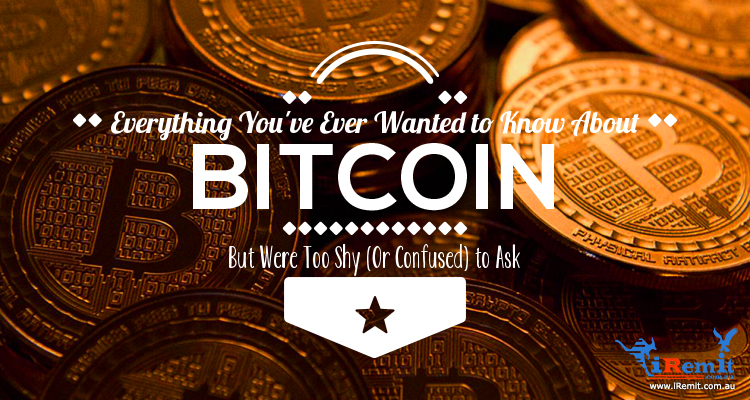 As I write this, I have several tabs on Bitcoin open and my eyes (and brain) are pretty much glazing over as I try to understand the whole concept. It’s a reaction which, I’m comforted to know, is pretty common among most people who hear about cryptocurrencies for the first time.

Quick, say it with me: WHAT THE HECK IS BITCOIN?

And why on Earth is there so much hype around it? Is it really going to replace paper money in the future? Will it render banks and financial institutions irrelevant? Should I invest in bitcoins? Does the presence of Bitcoin mean that the AntiChrist is coming?

If, like me, you’ve been wondering exactly the same things (okay, maybe not that last one) and are looking for a way to make sense of all that, then you’ve come to the right place. Read on and join me in summing up what the Internet has to say about Bitcoin FAQ’s:

Let’s get this out of the way: Bitcoin isn’t physical money. There aren’t any coins or bills around that are printed with the face of Bitcoin’s founder, who, by the way, is mysteriously known only by an alias: Satoshi Nakamoto. It should also be noted that Bitcoin is owned by the community as a whole, sort of like a huge, open-source initiative with no single owner behind it.

Launched back in 2009, it’s a digital currency that uses decentralized technology to secure payments and store money without the use of banks or requiring depositors’ names. Basically, it’s a digital representation of money that’s free of government and/or banking control.

How Does It Work?

Bitcoin runs on the blockchain, which is a decentralized ledger run by “miners” who use powerful software and hardware to generate bitcoins and to crunch transactions.

To understand Bitcoin, you need to understand how the blockchain works. Think of it as a ledger that keeps records of all digital transactions in lieu of a central administrator like a bank or the government. Blockchain organizes data in batches called blocks, which are linked together in an unbroken chain by cryptographic validation, hence the name “blockchain.”

Community users generate blocks on the network to create bitcoins. Each time a purchase is made, the ledger records it and sends it out to all the computers on the entire network. These computers from all over the world then compete to confirm the transaction by solving complex mathematical equations. The first computer to solve these and thus validate the block is rewarded with bitcoins.

“Mining” is the term for this process, and is pretty much how bitcoins are generated.

What Factors Affect Its Price?

How can something that was worth USD2 apiece less than a decade ago suddenly be worth USD4,000 per unit as of this writing?

Unlike traditional currency, which has value that’s determined by a country’s gold reserves or a government vouching for what it’s worth, bitcoin is free from inflation because a controlled algorithm sets a finite number of available coins at any time. Still, that doesn’t make it invulnerable to fluctuations in market value, which is determined by the economic forces of supply and demand.

The price of bitcoins has soared and crashed ever since it entered mainstream consciousness in 2013. Just before the collapse of Mt. Gox, the biggest online bitcoin exchange, its price was up by almost 10,000 percent.

These days, however, bitcoins are valued highly again since some regulators appear to be warming to it and a few countries are exploring the concept of paperless currency, which brings us to….

Is It Legal Tender? Will It Replace Currency As We Know It?

It depends on where you live. Japan, for instance, legalized Bitcoin as a method of payment this year and India appears to be on the verge of doing the same.

On the other hand, it largely operates in a gray area in most countries. Because not a lot of people understand how it works, it has yet to be officially banned or approved elsewhere, so it’s not likely to replace paper money entirely anytime soon.

What Can I Use Bitcoin For?

Bitcoin has a range of uses, such as funding companies, transferring money without fees, and even for purchases at select retailers online. There are also offline businesses that accept bitcoin payments, such as the UK’s CEX stores, Your Sushi restaurants, and a few pubs.

Sadly, because there aren’t any paper trails that can tie individual identities to Bitcoin wallets, criminals, drug dealers, and money launderers also use this type of cryptocurrency for all sorts of illegal activities.

Some people also treat it as an investment since some of the early investors made notably humongous gains, although Bitcoin’s price is notoriously volatile.

Should I Invest In It?

If you have extra cash that you can afford to risk, you may want to look into mining for cryptocurrencies like Bitcoin. Be warned, however, that it’s not a get rich quick scheme and that it’s not as easy to get into as before due to capitalists buying up very costly dedicated mining equipment, thus pushing out small-time miners.

What you can do is set up a decent computer that’s powerful enough to crunch all those transactions, and then scale your growth depending on how much capital you have to put in. What’s great about cryptocurrencies is that when done right, they can still be profitable even when done on a very small scale, so you can actually earn from your gaming PC even while you’re sleeping.

Given how the PHP seems to be on a downward trend these days, Bitcoin seems to be worth a closer look at least, no?