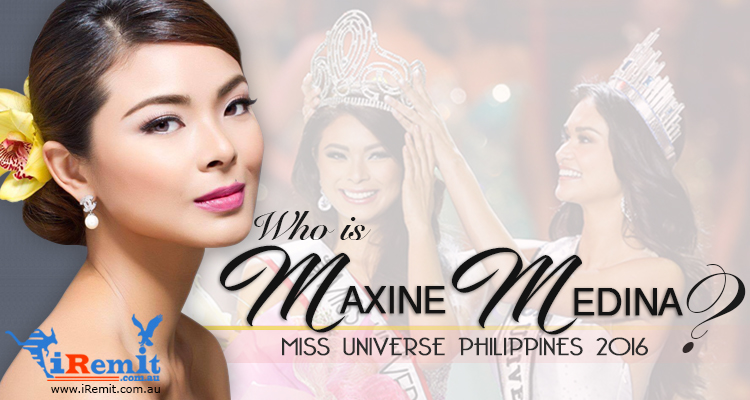 Everything You Need to Know About Ms. Philippines Maxine Medina

The pressure is on! We are merely six days away from the most awaited event by far – the Miss Universe coronation. Last year, Pia Wurtzbach helped us to claim what was rightfully ours as she won the title that ended the 42-year drought. Will this be a back-to-back win for the Philippines?

Our new candidate Miss Philippines 2016 Maxine Medina has admitted in her past interviews that she feels pressured and nervous as she has big shoes to fill. However, Miss Universe 2005 Natalie Glebova confidently included Maxine in her top twenty selection. Who better to predict the shortlist than the person who already won the crown?

Before Maxine competes for the coveted crown, here are some of the most interesting things about her:

She is Fueled by Creative Juices

Maxine Medina is more than just a pretty face! She is a freelance interior designer who graduated from the Philippine School of Interior Design and De La Salle-College of St. Benilde. Her experiences in designing residential condominiums exude pure creativity. I just hope that she uses her talent to craft an answer that will please the judges.

Beauty Runs Through Her Veins

Good looks seems to be a product of genetics as both of Maxine’s parents were models. What is more interesting is the fact that she is not the only beauty queen in the family! Model Gem Padilla-Thomas was previously the Miss Universe Philippines 1990. She is Maxine’s loving aunt.

Out of all the nuggets that she can impart to her, she chose to leave a simple reminder: “Do not forget to have fun”. This is important as having fun can just diminish her nerves!

She Has a Background in Runway Modeling

To become a legitimate beauty queen, you must perfect your walk. Worry not about Maxine’s appealing posture and stride through the runway because she has appeared on various print and runway modeling gigs.

Similar to her batchmates Miss International 2016 Kylie Verzosa and Binibining Pilipinas Intercontinental Jennifer Hammond, Maxine is a member of PMAP. PMAP stands for Professional Models Association of the Philippines. It is a premier organization founded back in the late ’80s. The prestige is extended to the international models Kelsey Merritt and Katarina Rodriguez as well as Miss World Philippines 2014 Valerie Weigmann.

She Believes in Second Chances

According to the fashion designer and consultant Bessie Besana, Maxine was supposed to be a part of the 2012 Binibining Pilipinas candidates. She did not make it due to her contractual obligations. This may be a blessing in disguise as she nabbed the title in 2016.

Since Direk Jeff Jeturian discovered her, Maxine waited for the right time until she was fully prepared to join again. The people behind her success were all elated and the country’s support was overflowing.

All eyes is on Maxine Medina as she tries her best to achieve a rare back-to-back win for the herself, her family, and the Philippines.