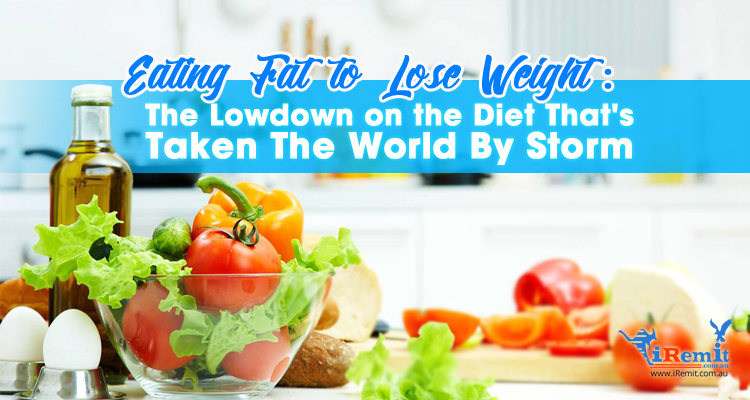 By Serena Estrella in Health and Fitness
February 12, 2018

Eating Fat to Lose Weight: the Lowdown on the Diet That’s Taken the World by Storm

When I think of the word “diet,” images of what I like to call rabbit food usually come to mind. Carrot sticks, celery sticks, leafy greens…. We basically have to cut all the tasty, excuse me, fatty stuff from our plates to lose weight, right?

According to the ketogenic diet, no.

Imagine having a pile of bacon for breakfast, and then eating a juicy burger topped with a lot of cheese for lunch, AND then losing weight. Sounds like a dream come true, right? No wonder this new diet craze has been sweeping the globe as of late, with celebrities from Kim Kardashian to the Philippines’ own Juana Change swearing by its effects. Even restaurants and food delivery services have acknowledged the trend by including ketogenic options on their menus.

But wait a sec, what exactly is the science behind the diet? Does it actually work? And most importantly, is it safe?

What Is The Ketogenic Diet All About?

The ketogenic diet is a high-fat, low-protein, and low-carbohydrate diet. It was originally developed to treat children with epilepsy, as the regimen inexplicably helped reduce the frequency of their seizures.

These days, everyone from NBA players to your friend’s mom is on it for all sorts of weight loss goals.

How Does It Work?

As its name suggests, the ketogenic diet is centered on a bodily process called ketosis. This is when the liver converts fat into fatty acids and ketone bodies. The ketones replace carbohydrates as your body’s primary energy source, so your body ends up essentially burning up the fat you consume, thus helping you lose weight.

However, ketosis can only occur if you have a depleted supply of carbohydrates, so 80 to 90 percent of the calories you consume should come from fat, with the remaining 10-20 percent coming from a combination of protein and carbs.

Theoretically speaking, a ketogenic breakfast could be comprised of high-fat meat like bacon strips and hotdogs, but without any accompanying carbohydrates like rice or toast.

What Makes It Different From Other Diets?

Unlike the Atkins diet, which encouraged practitioners to cut carbs during the first phase so they could consume more of the stuff after achieving a mild state of ketosis, the ketogenic diet is decidedly more extreme. Here, you’re all but eschewing carbohydrates entirely for life, which is why it can be difficult to sustain.

Under a strict regimen, for instance, your daily carbohydrate intake should be no more than 35 grams. That’s about the same amount of carbs in a glass of milk, a slice of bread, and an apple. This makes it nearly impossible to consume any fruit-based or dairy based products without going over your carbohydrate restrictions.

As with other diets like paleo, protein consumption is encouraged, but not the lean sort, mind you. High-fat ones are the star here, as are a variety of oils, nuts, as well as cheese.

Shockingly enough, the ketogenic diet is perhaps the only regimen I know of that doesn’t really encourage eating vegetables due to their carbohydrate content.

Will It Really Help You Lose Weight?

Yes, but perhaps not for the reasons you might think. While it’s true that the body can burn fat during a state of ketosis, eliminating most carbohydrates can drastically reduce water weight, making it look like you dropped x number of pounds whenever you step on the weighing scale.

Steering clear of refined carbohydrates like white rice or white bread also diminishes your body’s intake of added salt and sugars, and replacing them with good fats, such as those found in avocados, nuts, and eggs, can also result in drastic weight loss.

What Are The Side Effects Of Going On A Ketogenic Diet?

By now, you might be thinking that a ketogenic diet is far too good to be true. Well, it isn’t.

Making your body undergo extreme ketosis can lead to a whole host of rather unpleasant side effects. Fatigue, bodily weakness, and oh, bad breath, and horrible body odor are just a few.

If you like hitting the gym, you may also find yourself with less capacity for strength-training and high-intensity exercises. Both activities depend on carbohydrates for stored fuel, and a body running solely on ketones simply can’t exert itself the same way.

Lastly, you could permanently damage your metabolism if you stay in ketosis longer than you should. Training hard without a store of carbohydrates makes your thyroid reduce the number of calories your body burns during the workout to compensate, thus slowing your metabolism down. Since there’s really no way to tell how long your body can hold out functioning like this, it can prove quite hard or even impossible to get your metabolism back on track.

The truth is, no diet trend can take the place of a healthy lifestyle . Loading up on fat to lose weight might be scientifically sound, and it could help you shed pounds relatively quickly (especially if you went overboard on feasting last Christmas), but it’s little more than a quick fix and can even be potentially harmful later on.

Looks like we’ll be keeping those carrot sticks then.