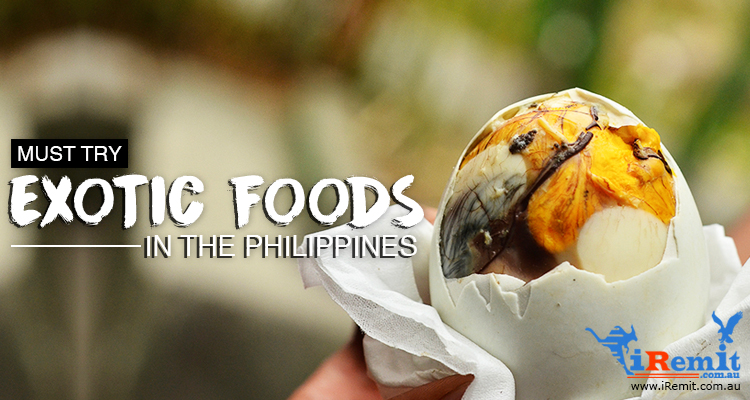 Do You Have the Guts to Eat These Exotic Filipino Food?

Exotic food applies to culinary dishes that are unusual, taboo, or novel from the perspective of an individual’s culture. Filipino cuisine is holistically diverse. However, our kababayans used their creativity and resourcefulness in making some of the most unique dishes.

When foreigners think of exotic Pinoy eats, one of the first things that cross their minds is Balut. It has been featured in popular international television shows such as “Fear Factor” and “The Late Late Show with James Corden”. Balut is a fertilized duck egg that has been boiled. I cannot blame you if you are disgusted by the almost formed duckling inside the egg! But, I personally enjoy eating Balut.

Another unique food that brings me warm and fuzzy feelings is Baguio’s Sundot Kulangot. My big family used to go for the annual Baguio City trips when I was a child. As we bid farewell to the land of strawberries, we would purchase the traditional candies called “Sundot Kulangot”.

Some people are grossed out by it because the name translates to “Pick a Booger”. Despite this unappealing name, the filling inside the small wooden orbs are actually sweet. Sundot Kulangot is made of glutinous rice, coconut milk, and brown sugar. You must try it next time!

Moving on to the medium difficulty…consider tasting Adobong Salagubang, Adobong Uok, and Betute Tugak. Adobong Salagubang or June Beetle is juicy on the inside and crunchy on the outside. It is usually sold during the rainy season in the markets of my mother’s hometown, Nueva Ecija. I have tasted this before and I was not really a fan.

Much like Adobong Salagubang, Adobong Uok has an interesting texture. It is made of beetle larvae that is cooked like a chicken adobo and served with rice and tomatoes. These creatures live in dead coconut logs. Some natives even eat them raw! One of the members of our team has tasted this and said that it mimics the taste of meat.

The last delicacy that I can handle is Betute Tugak, a delicacy from Pampanga. Pampanga’s own spin to field frogs is Betute Tugak or Stuffed Frogs. They deep-fry the frogs and stuff them with minced pork. It sounds oddly delicious!

Among all the items found on this list, two dishes struck me as the most difficult. You need to accumulate loads of courage to be able to eat the Tamilok and Salawaki. At first sight, Tamilok or Wood Worm is far from appetizing. The greyish worm looks slimy and gooey! And, it really is.

Eating Tamilok requires you to pick out one thick strand without a fork. Swallowing this delicacy is another challenge as its texture is feathery and slimy. There is a tendency for it to cling on your esophagus like a long oyster. Despite its appearance, it is actually a mollusk that is found inside a rotting mangrove.

Lastly, Salawaki translates to Fresh Sea Urchin. Sea Urchins are famously known as aphrodisiacs with spiny exteriors and bright interiors (i.e., either yellow or orange in color). These are commonly found in Bohol, La Union, and Bolinao. Much like the Tamilok, its texture is similar to the oysters’. The best way to eat it is fresh and raw. Are you up for that?

The beautiful Pearl of the Orient Seas has a lot to offer apart from its picturesque sceneries and hospitable inhabitants. If your Aussie partner is looking for the next adventure, consider eating these exotic food to amp up your vacation experience!

Are you brave enough to try all of these?