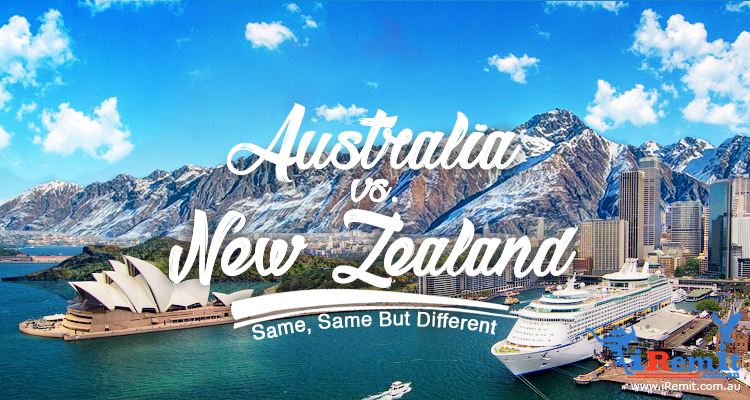 By Serena Estrella in Life in Australia
September 1, 2017

If all the countries were one big Kardashian family, Australia and New Zealand would be Kendall and Kylie: young, rich, and pretty much an interchangeable mix of nature parks, semi-British accents, and a laid-back culture (or false eyelashes, plumped-up lips, and hyperactive Instagram accounts in the latter’s case).

Oh, and let’s not forget the not-so-subtle rivalry between these two. In lieu of likes and followers, however, the battle between Australia and New Zealand all boils down to which is the better place to move to and live in.

And given how the rest of the developed world is currently in political turmoil, this is one showdown worth looking into, especially for those of you who are in search of greener pastures:

Australia: With many of the world’s powerhouse currencies (*cough*dollar*cough*pound sterling*) taking a tumble recently, the Australian dollar’s upward trajectory is a welcome relief for those depending on remittances. Ever since the late ‘90’s, an abundance of precious rocks, minerals, and dirt, along with attractive tourist destinations and a housing boom has led to the so-called Australian economic miracle. This propelled the country through the global economic crisis of 2008-2009, and has consistently enabled it  to weather lesser storms in the subsequent years.

On the other hand, high incomes are accompanied by high taxes and high costs of living. It now costs 50% more to live in Sydney than in New York and Melbourne has been given the dubious honor of being the eighth most expensive city in the world. The slowdown of the mining industry in Perth and the possibility of the Reserve Bank of Australia decreasing interest rates are also economic threats that are looming on the horizon.

New Zealand: Compared to the continental land-mass that is Australia, New Zealand is practically a speck on the map. So, yes, the economic opportunities and growth of this island nation may not be as numerous or massive as its Aussie cousin’s. Wages in Australia, for instance, are known to be higher, and are the cause of many a Kiwi hopping on over. It’s also harder to find professional jobs here, and they’re practically non-existent outside of Auckland and Wellington, so yuppies looking to enrich their resume are probably better off doing that in Australia.

This is not to say that NZ can’t hold its own when it comes to economic enticements, though. There may not be as many jobs here and most of them might not pay as much as their Australian counterparts, but it is also far cheaper to live in New Zealand. Taxes are also fewer and lower, and Kiwi’s can buy houses without having to deal with costly documentary stamp taxes. Generous first home buyer grants too deserve a mention.

Australia: High costs of living aside, this country’s still a pretty good place to live in. Medicare is one of the best universal healthcare systems in the world, public transport is pretty good, especially in cities like Sydney and Melbourne, and the overall feel is more laid-back than other Western countries.

There’s also a thriving Filipino community here, and Aussie culture is mostly informal and straightforward. Many towns and cities have wholesome recreational centers and attractions that are great for growing children, and the strict implementation of environmental protection laws make for lots of clean, fresh air.

New Zealand: This country didn’t win “Best Place to Live In” award last year for nothing. As arguably the last landmass in the world to be colonized, much of its natural resources remain largely unspoilt and it’s known to be one of the world’s most environmentally friendly countries.

There isn’t much of a nightlife, but if you’re looking for peace and quiet, New Zealand can offer you that in spades. The top-quality meats (courtesy of all those cows and sheep) and seafood can’t be beat either.

Australia: Down Under is home to 2500 km of beautiful blue surf coast, the Great Barrier Reef, the rugged West Coast, over 8,000 islands, countless watering holes, and of course, the sandy Outback.

If you’re an outdoorsy person, you won’t run out of places to see here in Australia for at least a year, that’s for sure.

New Zealand: Because New Zealand is centered on volcanic activity, it’s got a lot of beautiful lakes, mountainous peaks, and therapeutic hot springs. It’s even got an assortment of bubbling bright orange, bright green, and turquoise blue volcanic crater lakes in Rotorua that are worth exploring.

And let’s not forget that the country’s entire landscape stood in for Tolkien’s Middle Earth, eh?

Australia: Mother Nature appears to have blessed and cursed Australia in the same breath. Sure, you can see practically all kinds of breathtakingly glorious land forms and water forms here, but it isn’t unheard of to have blazing bushfires in Victoria, cyclones and floods in Queensland, and relentless droughts in between- all happening simultaneously.

We haven’t even talked about all the deadly and poisonous creepy crawlies that can somehow make their way into your house or car yet. Eep.

New Zealand: There aren’t any snakes in this country. At all. (No, I don’t know why either.)

Bushfires and floods aren’t common either, but what you do need to look out for are the earthquakes. Back in 2011, a 6.3 magnitude earthquake devastated Christchurch, killing 185 people and causing massive, widespread damage that they’re still repairing to this day.

Australia: There are plenty of ways to get your foot in the door here. There’s the student visa, a work visa (either via an employer sponsorship or through a skilled regional visa), and the permanent resident visa, among other things.

There’s even a new parent visa being rolled out soon if you want to bring your kid’s grandparents over to help out with the babysitting.

New Zealand: As the backdoor to Australia (citizens of both countries can freely work and travel in either place), New Zealand’s visa options are highly similar to Australia’s. Aspiring migrants should also take note of the working holiday visa applications that reserve slots for 100 Filipinos every year.

In sum, Australia and New Zealand are two of the world’s most beautiful countries to live in, and okay, moving there might really improve your quality of life.

Still, the perks of clean air, dollar paychecks, and an Australian or New Zealand passport shouldn’t distract you from the things that are truly important to you. This means that if you want your kids to grow up close to their grandparents or being keenly aware of their Filipino heritage (or if the thought of being an outsider in a foreign country gives you pause), then perhaps it’s time to look at other alternatives (and benefits) within your home country.