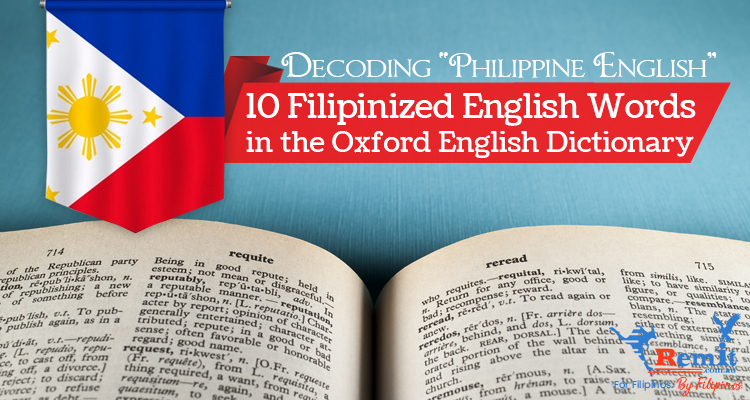 Occasionally, a Filipino word makes it into the Oxford English Dictionary (OED). Can you guess what the first one was?

Nope, it’s not balut. Neither is it adobo. *gasp!*

a kind of banana plant, Musa textilis, native to the Philippines, the petioles of which yield a strong fiber. Also: the fiber itself, used for making paper, ropes, matting, etc.; Manila hemp.

Buwan ng Wika or National Language Month typically brings to mind some pretty deep Tagalog words, or ones that don’t have an exact English counterpart. But did you know that we Filipinos have also created uniquely new meanings for English words too?

They’re called Filipinized English words, and the alternate definitions even appear in the OED. Apparently, there are over 200 of them. Here are a handful of the most familiar terms:

(noun.): a carton shipped or brought to the Philippines from another country by a Filipino who has been living overseas, typically containing items such as food, clothing, toys, and household products;

(noun): a member of the same graduation class as another; a classmate; also in extended use;

(verb): to steal a motor vehicle;

(noun): a car thief or a person who steals a motor vehicle;

(noun): (originally) a room in a public building or workplace furnished with amenities such as facilities for resting, personal hygiene, and storage of personal items (now rare); (later) a public toilet (now chiefly Philippine English);

(noun): in Filipino cookery: ice cream of a type that is typically made from coconut milk, sold from handcarts by street vendors;

(noun): a kitchen where everyday cooking is done by household staff, as distinct from a kitchen that is purely for show or for special use by the owner of the house;

(verb): to apprehend and execute (a suspected criminal) without trial

In many ways, a language is much like a person. So long as people keep using it, it will grow, evolve, and imbibe changes from its environment.

We Filipinos have long pondered the influence of several centuries of colonization on our mother tongue. This August, let’s not forget to marvel at how the Filipino language continues to make its mark upon the world.