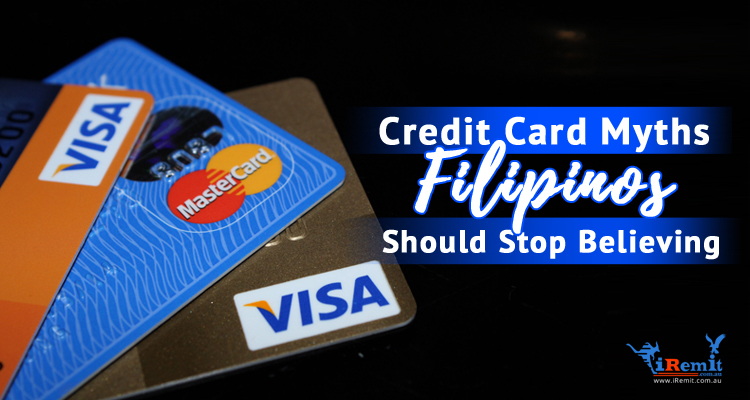 Back when I was still retailing for a certain multi-level marketing company (hint, their name starts with “N” and ends with “skin”), I noticed that majority of my clients in the province often paid for their purchases with either cash or a check. It was all fine and dandy, up until someone decided to buy five kits of the said company’s signature gadget, and then paid IN CASH for the six-figure price tag.

So, yeah, I pretty much traveled back to Manila with a few thick bundles of Php1,000 bills in my duffel bag, feeling very much like a runaway bank robber.

Seriously, though, many Filipinos are still reluctant to sign up for a credit card, especially outside the capital. It isn’t because they lack the funds for it, either. (One matron I was acquainted with in the north brought an entire bayong of cash to pay for her hospital bills after a procedure.) Rather, it’s due to some persistent myths still making the rounds today:

Blaming your credit card for overspending is like blaming McDonald’s for making you fat. In both cases, it was your decisions and habits that led to unfavorable outcomes. (And come on, not everyone who has credit cards or eats at McDonald’s get into debt and/or gets fat.)

Impulse buying IS what causes you to overspend. It’s a behavioral pattern that you need to address, and credit card buyers can avoid falling into this trap by checking how much cash they actually have before swiping.

As a rule, I often ask myself if I have enough money to pay for whatever I’m purchasing with my card. If the answer is no, I usually don’t push through with the transaction.

That said, if you have deeply-rooted addiction or impulse control problems, it would be best to resolve those first before you sign up for a credit card.

So, there’s a story about a Filipino nurse who migrated to Abu Dhabi and ended up going to debtors’ prison after racking up USD27,000 in unpaid bills.

The thing is, this happened back in 2011 in the United Arab Emirates. There’s no record of any similar events occurring in the Philippines because here, unpaid debts are considered civil liabilities, not criminal ones. So, no, you won’t be jailed if the bank classifies your credit card debt as “uncollectible.”

You will probably get blacklisted for future loans and credit cards, though, so it’s still not a good idea to bail on your monthly bill.

3. Having a credit card damages your credit score.

Not at all. Having a credit card and consistently paying it off on time actually helps you build a good credit score.

Take note, the keywords here are “consistently paying it off on time,” so having a credit card alone isn’t the only prerequisite to your desired credit score.

4. Only rich people can afford to have credit cards.

Thanks to the economic developments over the past decade, the average Filipino consumer has enjoyed more purchasing power than ever. Of course, banks would like to cash in on this, so many of them have come up with various credit card packages for different income brackets. Thus, even minimum wage employees can avail of a credit card.

5. You need to pay additional fees on top of your credit card bill.

Only if you don’t pay your debts on time, that is.

Okay, so most credit cards come with annual charges, but on the whole, you’re only billed interest payments plus finance fees and penalties if you fail to settle your balance in full before your monthly due date. Other than that, you shouldn’t have to pay any more than how much you actually charged to your card.

Credit cards are like guns or money. They’re neutral tools that can be used for good or for ill, and in the right hands, they can do a lot of the former.

Staying informed is simply the first step towards making sure that you end up in the right camp.