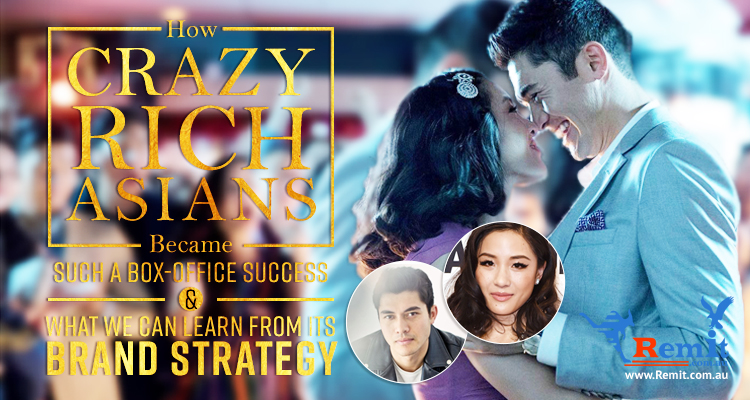 I first came across Kevin Kwan’s best-selling debut novel shortly before Christmas back in 2014. While the book’s rich-guy-falls-for-poor-girl trope isn’t particularly groundbreaking, the author’s satirical descriptions of how the Asian 0.1% make Gossip Girl’s Upper East-Siders look like peasants made it a delicious read.

Take the prologue, for instance. A group of unassuming Chinese women and their kids show up drenched and haggard-looking in the lobby of a fancy, centuries-old London hotel and are immediately shown the door by the establishment’s snobbish (and rather racist) general manager, despite their having reserved the largest suite days before. One of the women makes a phone call to her husband back in Singapore and barely an hour later, the group strides through the hotel entrance yet again. As the manager rushes over to throw them out, the hotel’s owner (who also happens to be an English lord) appears and informs him that one of their husbands has just bought the place, thus making one of the women his new boss. *slow clap*

I’ve since given the book as a present to a couple of my friends and we ended up following the trilogy through to its culmination when “Rich People Problems” was released last year, but I don’t think any of us expected the movie adaptation to have made such a splash, to put it mildly.

As of this writing, the romantic comedy helmed by Jon M. Chu has bested its box-office competition for two weeks in a row, and looks to be up for a three-peat performance. With the film projected to bring in close to a total of US$100 million by the end of this week, it’s no surprise that Warner Brothers has already commissioned the sequel.

The movie is also being hailed as something of a cultural watershed, considering that the last Hollywood-produced film to feature a majority-Asian cast in a contemporary setting was released a quarter of a century ago, when Amy Tan’s “The Joy Luck Club” was adapted for the big screen. (2000’s “Crouching Tiger, Hidden Dragon” and 2005’s “Memoirs of a Geisha” also featured predominantly Asian casts, but are classified as period films.) Not bad at all for a film that was made on a “measly” budget of US$30 million, eh?

With box-office receipts far exceeding initial forecasts made by industry analysts and the movie’s success heralding a triumphant moment for Asian representation in Hollywood, “Crazy Rich Asians” has become an unqualified super-brand. Just how did it get there? Let’s take a look:

1. Creating and Dominating a Sub-Genre.

Sometimes, the best way to beat the competition is to pick a battlefield with zero competitors. When you’ve got a unique product or service, you become the de facto industry leader simply because there’s no one to oppose you.

From the very beginning, “Crazy Rich Asians” carved out a niche for itself. Sure, there are lots of TV shows and movies about the wealthy, but “Crazy Rich Asians” was the first Hollywood theatrical release in the genre with an Asian setting and an English-speaking, all-Asian cast. As with “Black Panther,” the film’s producers leveraged the source material’s inherent racial and cultural diversity to come up with an uncomplicated tale that was told from a refreshingly different viewpoint.

Warner Brothers took a huge gamble on producing the film, sure, but it’s almost a guarantee that their revenues from the “Crazy Rich Asians” release will far encompass those of other studios that will follow their lead, now that they’ve shown that there is a market for diversity in film.

Why? It won’t be because this film will be the best ever, no. I’m sure other screenwriters and producers out there will be emboldened to create sweeping epic tales with an Asian cast, and that quite a few of them will eclipse the adaptation of Kevin Kwan’s novel in many ways.

Rather, this is because the movie’s producers were the first to fill the market gap for Asian-centric flicks. Being the first to market a unique product entails many advantages, not least of which is stronger brand recognition. Customers are more likely to associate your brand with a new product if you were the first to bring it into mainstream consciousness, and they will reward you for it, regardless of whether there are other companies that do it better.

Want further proof? “Harry Potter” was arguably the first children’s/young adult (YA) book series to be adapted into a major motion picture franchise. Yet while studios scrambled to do the same for other literature in the genre, they didn’t quite get the same mind-blowing results. The same goes for the “Hunger Games” franchise and the other, lesser-known post-apocalyptic flicks that followed in its wake.

There’s this somewhat outdated notion that the largest client demographic is the most profitable. While that still applies if you’re selling a generic product, going after the “narrow” markets can get you the most coveted form of advertising there is: word-of-mouth.

For the longest time, Hollywood has catered to white male audiences, believing them to be the most profitable demographic simply because they were the largest for a while. This is why 70% of film protagonists are white males who, I dunno, break doors, shoot guns, and jump off helicopters while a certain iconic theme plays in the background.

In reality, however, minorities and women are actually more avid movie-goers. Thus, when “Crazy Rich Asians” provided these audiences with a romantic comedy featuring leads who looked like them and had similar experiences, viewers were converted into true fans who took it upon themselves to promote the film among their own networks. Given social media’s role in amplifying that, the effect snowballed into a great deal of free publicity and serious $$$’s.

Thus, if you want your customers to drumbeat for your brand, focus on making a small, highly focused group extremely happy rather than trying to make a large group of them mildly pleased.

4. Having a Clear Brand Purpose and Inviting Your Audience/Clients to Participate In It.

The casting process for “Crazy Rich Asians” generated a lot of buzz because for the first time in ages, various Asian talents weren’t being passed over for their white contemporaries. In casting actors and actresses from all over Asia (heck, our own Kris Aquino even made it to the film in a small but pivotal role), it was as if the producers were telling an oft-neglected market segment that “We see you, and we’re here to tell the world about your experiences.”

It was also made known that Kevin Kwan turned down a ginormous amount of money from Netflix just so his opus would make it to the big screen, thus encouraging viewers from all backgrounds and ethnicities to turn out and join the movement to show Hollywood that diverse storytelling is very much in demand.

And just like how some customers continue to patronize certain brands because they like to align themselves with environmentally-friendly or socially conscious companies, you can bet that a lot of the “Crazy Rich Asians” fans who flocked to the theaters felt like they were participating in a historical moment, and that this made it so much easier for them to go see it a second, third, or fourth time, bringing along a different group of people every step of the way. I know I certainly did.

Ultimately, the success of “Crazy Rich Asians” goes to show that people will always be interested in a good story that they can see themselves in. (Okay, none of us here can and/or would probably drop US$1.2 million on a pair of exquisite pearl-drop earrings on a whim, but we can certainly relate to being torn between going after who or what we love and getting our family’s approval, or being an Asian migrant growing up in the West and being confused about reconciling those two halves of one’s identity.)

Thus, any business who can come up with a compelling story for their brand and somehow make their clients feel like they play a crucial role in it can potentially end up getting crazy rich too.