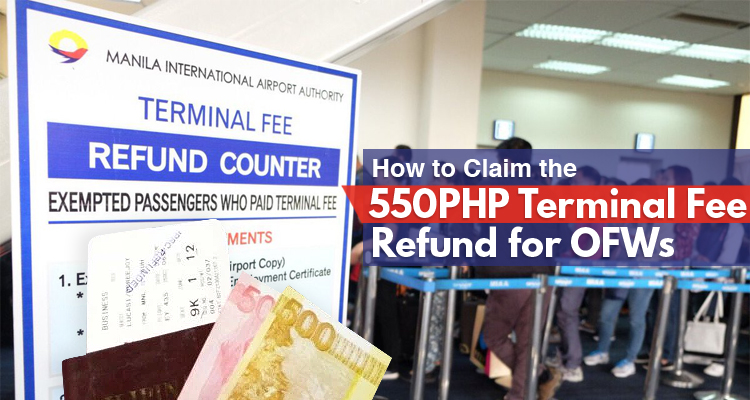 By Leandro Eclipse in Filipinos in Australia
July 17, 2018

How to Claim the 550 PHP Terminal Fee Refund for OFWs

Are you an OFW ready to embark on another journey? Want some extra cash when you’re at it? Luckily, the Philippine Government finally pushed through the terminal fee refund for OFWs.

Payment for this extra charge called the ‘International Passenger Service Charge’ has been incorporated in our ticket prices starting the last administration. It raked roughly 1 billion pesos in revenue already throughout its implementation.

As early as 2017, they have announced the exemption of OFWs of terminal fees. It’s a well-deserved gift for the sacrifices made by our modern-day heroes. As of the moment, 40 Airline companies have signed an agreement to refund such charges. You can refund for your tickets booked as early as August 2012.

But it’s not known to many how to do it exactly. It’s really simple to do so. There are two ways to get your refund. One is through the Refund Booth in the airport (NAIA) or the second is at the Manila International Airport Authority (MIAA) office at Pasay City.

How to Get Refund

The steps are relatively easy. First, just bring your printed itinerary receipt with record locator and a valid ID in the refund booth or the MIAA office.

Next, show your work permit or work visa, employment contract, valid Id, or any similar document signifying that you are employed.

Afterward, they will give you the refund. That’s it.

It is important to note that lines in the airport refund booth can be very (!) long. You have to plan accordingly.

Or better yet, it’s best to get your refund on the MIAA office. The MIAA office is open from 8 AM – 5 PM, Mondays to Fridays, except during holidays. Some airline carriers also have a dedicated lane for OFWs for this purpose (kindly call their hotline first to be sure).

For those who missed their flights, you can also refund your unused terminal fee even if you’re not an OFW.