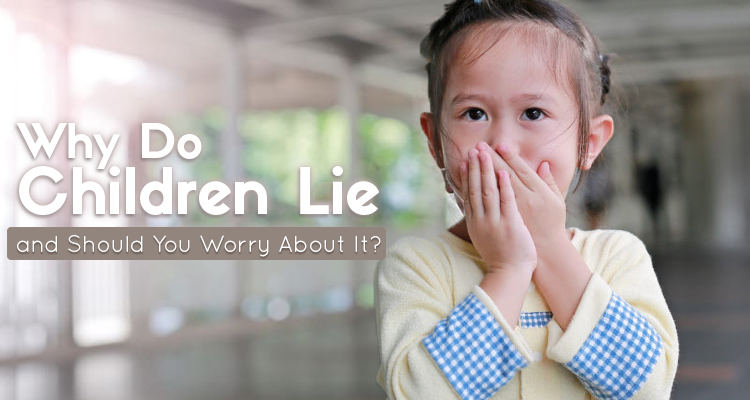 Why Do Children Lie and Should You Worried About It?

Raising a child is a blessing. You get to nurture your young ones to become great individuals in the future. It’s hard. But when you get to hug them, it makes all the sacrifices worth it.

But in a casual chat, you suddenly heard the most preposterous thing in the world. He just made the walls his/her coloring canvass. When you asked, “Did you write on the walls?” He replied, “It was my teddy bear!”

Oh my God, how can he lie at an early age? Is this Karma biting back at my wrongdoings? Or worse, is my child the next devil’s advocate?! Why do my children lie?

Your Children Lying is Normal

Before you kneel over the church altar for 10 hours, I just want you to know that your kids lying is normal. Yes! So stop the weird incantations! Most likely, s/he is not possessed by an evil entity. I said stop!

In fact, studies show that they start to lie at age two to four years old. It’s a normal part of childhood development. It’s in this time where they develop their emotions, independence, and feel what other people feel.

It’s where they realize the theory of the mind where they finally understand other people’s beliefs, feelings, and desires. Know that early lying is a sign of people who can adapt to their society well and have more empathy later on.

Although morally, this is not acceptable. As parents, the next step is to understand why they are lying in the first place.

Why do Children Lie?

The reason why children lie basically is the same as adults. They are emotional beings and they crave the acceptance of their parents and peers. So they lie because:

It’s pretty much the same. I mean, how many times have you had “something came up” when canceling your appointments? Or did you remember the time you feigned innocence to a traffic violation? And of course, you didn’t eat that cake in the fridge. It magically melted to Narnia.

But this is no excuse for the dishonesty. So what should we do about it?

Should we prepare the tongue-lashing and heavy punishments to scare them off from lying ever again?

You may be tempted but this might not be the best route to follow. This may even make your lovable kids chronic liars in the future. And mostly, it is your fault.

Remember, they are just kids. If they fear your punishment so much, why would they endanger themselves from telling the truth?

“Children were told not to peek at a toy when left alone in a room. Most children could not resist the temptation and peeked at the toy.”

“Thus, a punitive environment not only fosters increased dishonesty but also children’s abilities to lie to conceal their transgressions.”

This goes beyond schools as well because children from very strict families tend to lie more. So give those children a breather and let them save face. Show that it’s ok to make mistakes so that they won’t lie about it.

If you spot something they are doing wrong, Let Them Save Face

Speaking of saving face, if you spot your children doing something wrong, let them save face. For example, you saw your child writing on the wall. Don’t ask “Did you write this on the wall?” Well, because obviously, he did. And he knows that you will be angry about it.

Try to frame the scenario differently. Instead of calling them out, why not say “You have a great drawing there. It’s nice, but it would be better if we use paper next time so that we put it in a beautiful frame instead?”

You did not only give them the chance to save face, you also fostered their creativity. You’ll never know, he can become the next Michael Angelo.

Convey Your Appreciation About Honesty

Lastly, it’s all about letting them feel loved. It’s a not a bad thing to implement punishments for their actions. But it’s better to focus on the times they did something well.

Convey your appreciation for their good actions. Tell them that you really like them to be honest because it makes you happy. Teach them that your honesty will be rewarded in the long run.

Hopefully, we get to understand children better and hone them to be a person of honesty and integrity in the future. Let us be patient! Ciao!