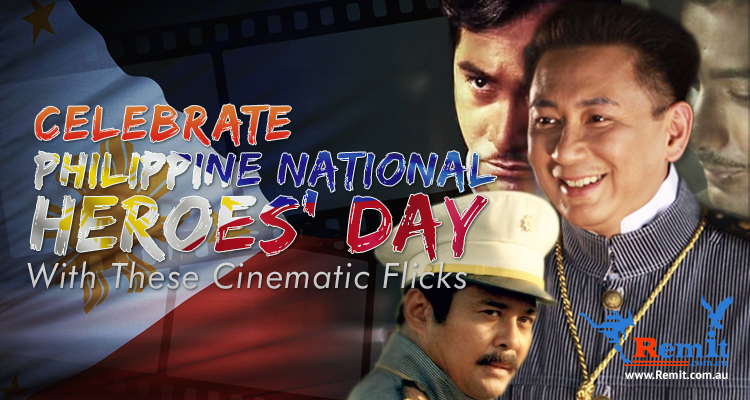 Given a recently-concluded Japanese manga series on Jose Rizal and the upcoming release of “Goyo” next month, we could say that there is a renewed interest in the lives and times of our national heroes. There’s also the fact that the Philippines’ road to independence, along with the men and women who paved it, provides no shortage of material for epic movies.

Thankfully, National Heroes’ Day is also a non-working holiday (for you non-remote workers out there anyway). So, instead of spending the day doing another “Stranger Things” or “Game of Thrones” marathon, why don’t you stream any of the following films about the very people we’re supposed to commemorate today?

Emilio Aguinaldo is one of the most controversial heroes in Philippine history. He won renown as a general who won majority of his battles and was elected as the country’s first President, but is also widely speculated to have ordered the deaths of quite a few of his fellow patriots.

This 2012 release relies on a series of flashbacks to illustrate how a young Caviteño eventually came to take his place among the nation’s leaders in the aftermath of the 19th century revolution.

As the face of the Katipunan, Bonifacio was beloved for his courage and his undeniable devotion to securing the country’s freedom and independence. He is so universally beloved that he even has his own holiday.

Directed by the late Mario O’ Hara, “Paglilitis” attempts to present the conflicting sides represented by the titular hero and his rival, Gen. Emilio Aguinaldo.

Given the rivalry between Bonifacio and Aguinaldo, it’s perhaps only fitting that they both had big-ticket biopics released within the same year. Here’s another fun fact: Jorge “ER” Estregan, who portrayed Aguinaldo in 2012’s “El Presidente,” would win the gubernatorial elections in his home province of Laguna the following year while Alfred Vargas, who plays Bonifacio in “Supremo,” is currently an incumbent member of the Philippine Congress.

Like “El Presidente,” “Supremo” also focuses on Bonifacio’s life events as they relate to the revolution that he would eventually set off. It’s also worth noting that while the film starts off really slow, the pace does pick up in the second half and the cinematography and musical scoring are particularly exquisite.

What makes this film different is that the narrative is seen mostly through the eyes of a young student in modern-day Philippines. Bonifacio here is shown as an earnest and all-too human character you will find yourself rooting for throughout his struggles, both against the Spanish government and amidst his own compatriots.

One of my personal favorites on this list, the 2015 surprise hit is set during the Philippine-American War. John Arcilla’s masterful portrayal of Antonio Luna reveals a capable yet hotheaded general who finds himself pitted against not only the American military but also his own treacherous countrymen.

While the film does contain some humorous moments to lighten up the mood, its ultimate message about the Filipino’s conflicting desires to do what is best for the country and to protect one’s family resonates to this day, and will leave its viewers with something to chew on for days afterwards.

No cinematic list that’s centered around Filipino heroism would be complete without an entry (or two, or three) on Jose Rizal. To be frank, making it to ten would be nearly impossible too, as our national hero is a favorite among many Filipino filmmakers.

One of the first films on Jose Rizal zeroes in on a very specific part of his life: his exile in Dapitan, thus illuminating the good doctor’s struggles as an outcast and ultimately, the price he paid for putting his country first.

Out of all the movies about Rizal, the 1998 one stands out the most, and with good reason.

This juggernaut not only spans the entirety of his life, but also features some relevant excerpts from his revolutionary novels. Lead actor Cesar Montano actually studied Spanish and read a handful of Rizal’s biographies prior to filming, and his meticulous preparation resulted in a noticeably heartfelt portrayal that is truly quite spellbinding to behold.

Though less known than its 1998 predecessor, this part-investigative documentary and part-satire has been lauded for its in-depth treatment of Jose Rizal’s supposed “retractions” against the Catholic church. It’s also the only film on this list that was shot entirely in black and white.

Before “Goyo,” there was “Tirad Pass.” This 1996 flick features the life story of one of Philippine history’s youngest and most decorated generals, the charismatic Gregorio “Goyo” Del Pilar.

Raymond Red became the first Filipino director to win an award at the Cannes Film Festival, and he did so with this short account of Macario Sakay’s life. Sakay fought both the Americans and the Spaniards in his lifetime and is recognized as the founder of the Tagalog Republic.

Life in the Philippines is by no means perfect. Anyone who’s ever had to migrate to achieve something knows that all too well.

And yet, we’ve come a long way from our ancestors in terms of the freedom we enjoy today, and countless national heroes and heroines have paid the ultimate price to get us here. Let’s honor their sacrifice by making sure that we and the generations that come after us #NeverForget.