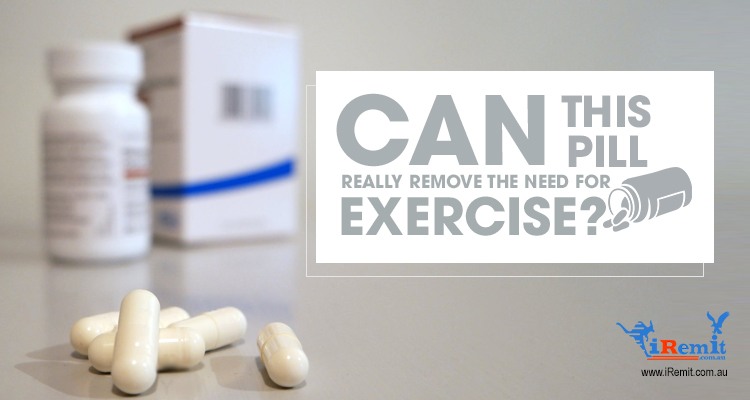 Can This Pill Really Remove the Need for Exercise?

The Victoria’s Secret models might be called angels, but the road towards heavenly bodies like theirs can only be described as a special kind of hell. Imagine swearing off carbohydrates and sugar for months on end, or even going on a post-partum liquid diet just to get a runway-ready figure in time for the annual show.

Then, there are the workouts. I read somewhere that veteran Angel Adriana Lima sweats it out at the gym twice a day for weeks prior to the yearly fashion show. Yikes. To think I consider myself on top of things if I manage to exercise thrice a week.

As working adults, many of us would rather just plop down on the couch or the bed rather than hit the treadmill after a long day’s work. Workouts can be painful and messy. You often end the session drenched in sweat and smelling of deodorant failure, and every part of your body often hurts the day after.

But what if there was a pill that could give you all the benefits of exercise without you having to lift a finger? Sounds impossible? For now, perhaps, but several labs from around the world are apparently close to developing drugs that can do just that.

Researchers at California’s Salk Institute for Biological Studies are currently researching a compound that mimics the effect of exercise by triggering a specific genetic circuit. It’s called 516, and it was actually developed in the late 90’s. It’s supposedly capable of tricking the body to break down fat instead of carbohydrates by altering the signals that genes send to your muscles, essentially gaming the process that’s naturally activated by exercise.

Don’t cancel your gym membership just yet, however. For starters, the drug is still in early trial stages, and the scientists behind it have a ways to go before they can commence testing on humans. Furthermore, the project was shelved back in 2007 after evidence of long-term toxicity was uncovered: mice that were given large doses of the drug over two years developed cancer at a higher rate than the ones in the control group, with tumors sprouting all over their bodies.

And even if the brains behind this experiment were to find a way to make the drug safer for human consumption, the so-called exercise pill will probably be available on prescription specifically to those who lack the physical capability to exercise. We’re talking the elderly, the handicapped, the injured, and people afflicted with genetic disorders that prevent them from building muscle.

So, yes, it’s possible for the pharmaceutical industry to come up with a pill to replace exercise, but that doesn’t change the fact that a bit of physical exertion is healthy for all of us, or that having a body that can still do as it’s told remains preferable to having to take a pill to simulate the effects of working out as a last resort.