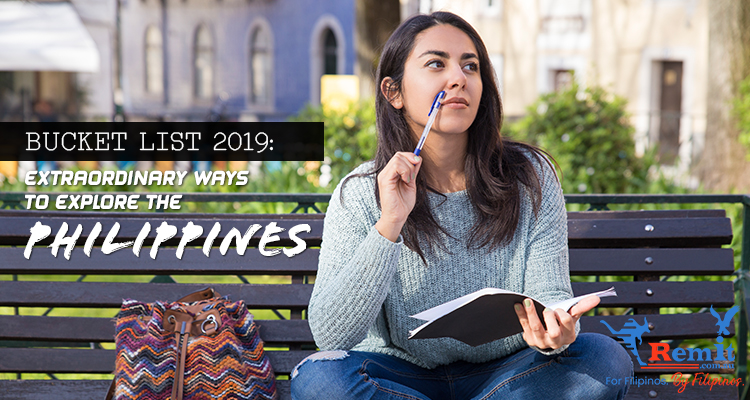 By Samantha Baluyot in Traveling to the Philippines
August 8, 2019

#TravelGoals has been a trend for the past few years. And we, Pinoy, didn’t fail to reach that goal. Most of us grabbed every opportunity just to travel and discover the hidden gems of the Philippines.

But if you want to take your traveling into another level, we listed a bunch of iconic activities that you must try to explore the Philippines extraordinarily. 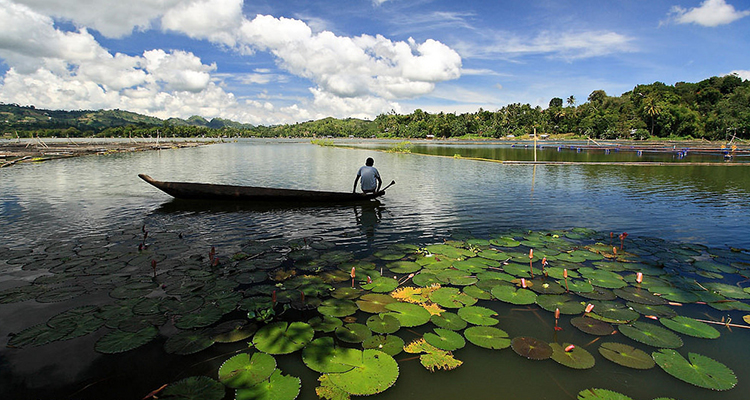 Lake Sebu is a scenic natural lake with waterfalls within the Allah Valley region in Mindanao. It is located in the ancestral domain of the T’boli and Ubo tribes.

Besides its beauty, Lake Sebu was recognized as one of the country’s most important watershed since it is the major provider of irrigation to the provinces of Sultan Kudarat and South Cotabato.

Canoeing in their traditional owong dugout canoes while enjoying the beautiful sunset is the most iconic activity that you shouldn’t miss in Lake Sebu.

Are you brave enough to travel alone? Test your bravery and go “ghost hunting” in Corregidor.

The island played a huge role in defending Manila during the colonial occupations, as well as during the Second World War. Many lives were lost on the island, including Japanese soldiers who were said to have committed suicide instead of surrendering to the Americans.

This historical island is an easy day trip from Manila since it sits right at the entrance of Manila Bay. You can either go on a day tour or stay there for the night and experience a spooky adventure. Who wouldn’t fall in love with this enchanting spring river? The river’s unique colors and unexplored depths has inspired various local legends.

One story tells of fairies that added the colors of sapphire and jade to the river to make its unique shade. Local fisherfolk also report seeing fish in the river that cannot be caught through any means.

According to locals, the river was called the “Enchanted River” because of the engkantos that dwell there. Their legends also say that the river is haunted by supernatural beings which act as its protectors.

Get a traditional tattoo in Kalinga

Kalinga is a landlocked province in the Philippines situated within the Cordillera Administrative Region in Luzon. The province’s name is derived from the Ibanag and Gaddang noun “kalinga”, which means “enemy”, “fighter”, or “head taker”.

Rice terraces, caves, falls, and springs are the must-see tourist spots in Kalinga. And of course, since you’re already in Kalinga, why not get a traditional tattoo from Whang-Od Onggay, the oldest living mambabatok (Kalinga tattooist).

Plant rice at the Banaue Rice Terraces in Ifugao 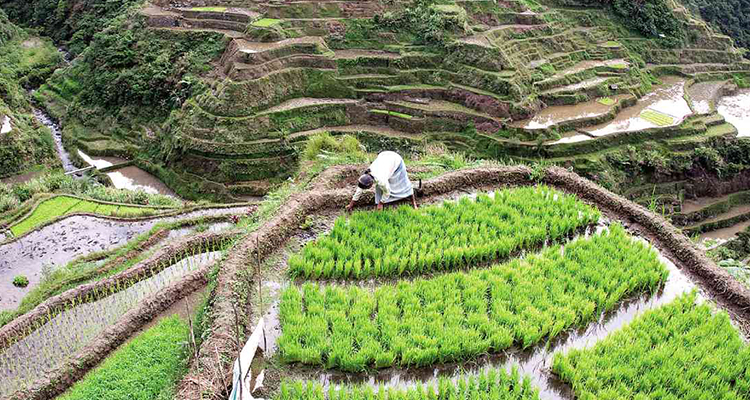 Appreciating the beauty and taking photos of the Banaue Rice terraces is what most tourists do whenever they get the chance to go to Ifugao.

But do you know what’s the best thing that you can do in Ifugao? Planting rice with the locals and have a great conversation with them. Talking to locals will give you the experience to know about their culture. 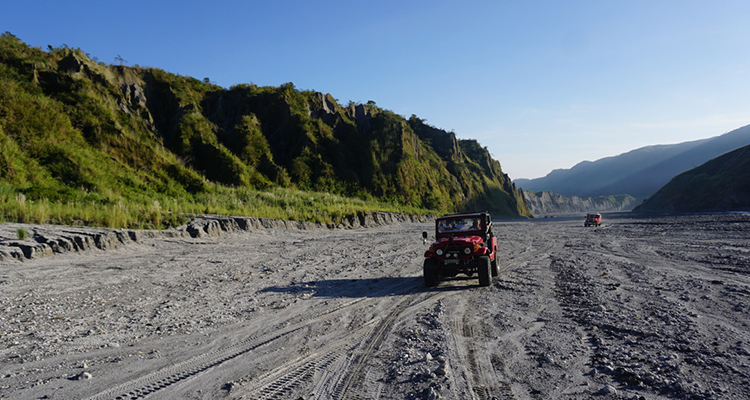 Are you up for an extreme adventure? From disaster to beauty, Mt. Pinatubo, Zambales proved that there’s always beauty in chaos.

Don’t hesitate to take the opportunity to drive or ride on a 4×4. Riding ATVs (All-Terrain Vehicles) in the lahar area will give you one of the moments in your life.

Ride “top-load” on a jeepney

The thing is, locals from Northern Luzon choose to ride top-load because they would rather sit on the vehicle’s roof than to wait for hours for the next one to arrive.

But of course, since we’re looking for an extraordinary way to explore the Philippines, why not try to ride top-load on a jeepney? I mean, you can only do it in the province, right?

Don’t worry, the air is fresher and the views are amazing in the province.

Mount Pulag is Luzon’s highest peak at 2,926 meters above sea level. The borders between the provinces of Benguet, Ifugao, and Nueva Vizcaya meet at the mountain’s peak.

And since you’re at the peak of the third highest mountain, stargazing is a must! 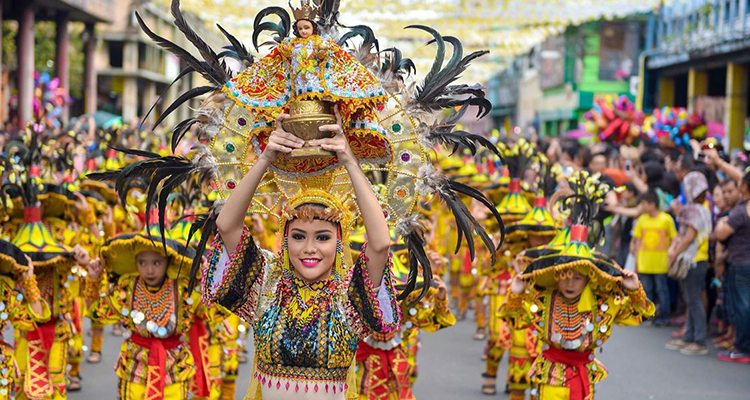 Local festivals or fiestas are held in almost every locality at least once annually. These celebrations are usually a few days to a week-long and consist of parades, competitions, colorful costumes, and street dancing.

One smart tip, before traveling to a certain place always check on their festivals. This way, you can visit and join locals as they celebrate their fiesta.

The beautiful island of Siargao is home to the country’s most famous “Cloud 9”. Surfers all over the world make their way to Siargao to ride the perfect wave.

Surfing lessons are available but make sure that you are fit to ride the waves. 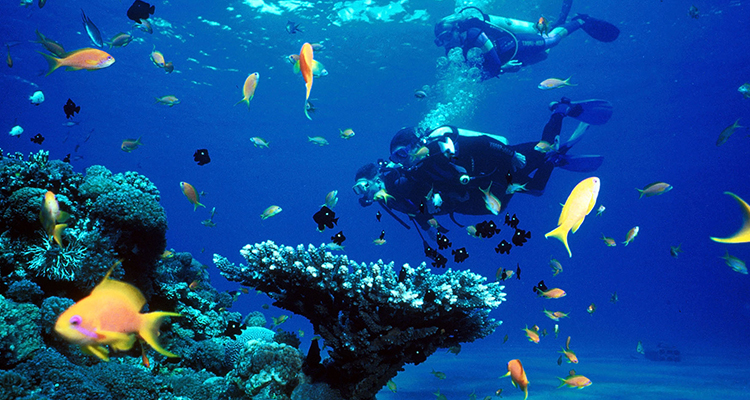 Tubbataha Reefs Natural Park is known for being one of UNESCO’s World Heritage site and diver’s heaven.

It is located southeast of Palawan within the Sulu Sea. This rich marine biodiversity houses hundreds of species of corals and fish, and sharks, dolphins, and whales.

Diving the Tubbatahas is one for the bucket list!

Ride the Colorful Vintas in Zamboanga

Vintas is a traditional boat created by The Bajau and Moros of Sulu and Zamboanga. It was used since ancient times to transport people and goods to and from different islands.

According to some books, the Bajaus and people from Tawi-Tawi and Basilan used these boats as their home and would seldom go to land except to bury their dead.

Dive the Sunken Cemetery in Camiguin Can you dive in knowing that there’s a sunken cemetery under?

In the 1870s, a volcano near Camiguin erupted and caused the cemetery along with the capital city surrounding it to sink below sea level. And to commemorate this place of loss, a looming cross was built in remembrance.

Known as Magayon Volcano or Mount Magayon, it is a sacred and active stratovolcano in the province of Albay in Bicol Region, on the large island of Luzon in the Philippines.

If you’re lucky, Mayon will show you her killer beauty but most of the time the shy Mayon hides behind thick clouds.

Batanes, the northernmost province in the country, and also the smallest, both in population and land area. But don’t underestimate this little province, Batanes may be small but it offers a lot of adventures and breathtaking sceneries.

The Vakul and Talugong are distinct Ivatan headgears. (Vakul for women, Talugong for men.) It is worn to protect the head from both the rain and the sun when they work in the field. It is made from the fiber of the Vuyavuy (Voyavoy) palm, which keeps the inside cooler even under the sun.

(This is a good souvenir, by the way. You’ll find some for sale at the Honesty Shop and in Chavayan, Sabtang Island)

One important tip in traveling, always find time to talk to locals. Smile at them, and show respect. Learning various culture of Filipinos is the most extraordinary way to explore the Philippines.