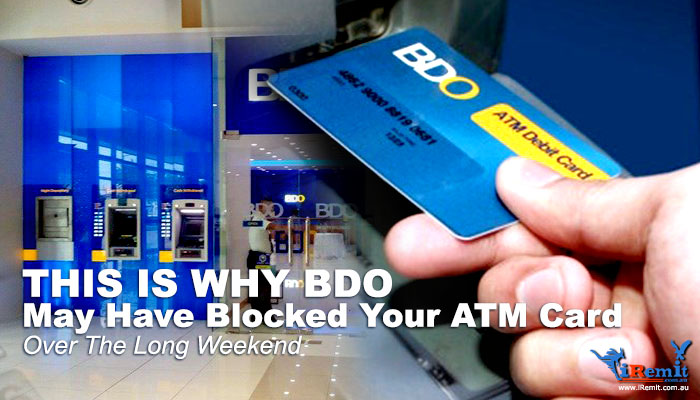 Except when you’re inexplicably cut off from your funds, that is. (That, and if, like yours truly, you still have to show up at work unless it’s Christmas or Easter, but I digress.)

Last week, several employees in the Philippines rejoiced over having their payday sandwiched between two long weekends, what with National Heroes’ Day on 28 August, Monday, and Eid Al Adha on 1 Sept., Friday. They probably would have had quite a blast over the past weekend too, only several people found their Banco de Oro (BDO) debit and cash cards blocked just as it was about to take off, with some of them receiving the following SMS message by way of explanation:

“The Bank has blocked your card ending in XXXX due to its use in possibly compromised ATM’s. Pls replace your card for free at your branch of account. You may get a pre-embossed card immediately or opt to transact over-the-counter. We apologize for any inconvenience this may cause.”

BDO Unibank Inc. thus released a statement explaining the reason behind the rather drastic measure:

“We regret to inform you that the industry has recently experienced an increased incidence of data skimming from ATM debit and cash cards. As a precautionary measure, we have taken the necessary steps to block the cards that we believe have been compromised.”

The said bank is currently the country’s biggest in terms of assets, with some 3,700 ATM’s nationwide. However, it declined to say how many cards were affected and in which areas of the country they were in.

Apart from an apology, BDO also waived the inter-branch fees for those who had to make over-the-counter withdrawals at select branches that were open on Saturday. The bank offered to immediately replace all of the compromised ATM debit and cash cards for free as well.

The recent data skimming incident comes on the heels of a similar occurrence about three months ago, when the bank’s customers witnessed a series of questionable ATM transactions. The culprits used illegal devices to access the magnetic stripe on the old ATM card to retrieve a depositor’s personal identification number or PIN in order to complete unauthorized withdrawals or transfers. These activities were later traced back to seven of BDO’s ATM’s located in three different locations.

In light of the increasingly frequent instances of bank fraud, the Central Bank of the Philippines or the Bangko Sentral ng Pilipinas (BSP) mandated local banks to replace their client’s old ATM cards with EMV chip-enabled cards. (Since the new cards don’t have the traditional magnetic stripe on them, their design is believed to be a deterrent against data skimming.)

The BSP had initially set the deadline for the switch to the EMV cards on 1 January 2017, but many of the local banks had yet to comply, so the date was moved to 30 June 2018.

On the other hand, the local banks may do well to abide by the BSP’s directive a lot sooner, given how easy it’s getting for fraudulent skimmers to derail their customers’ sense of security these days, and to demoralize bank employees by robbing them of their own leisurely long weekends, for that matter.