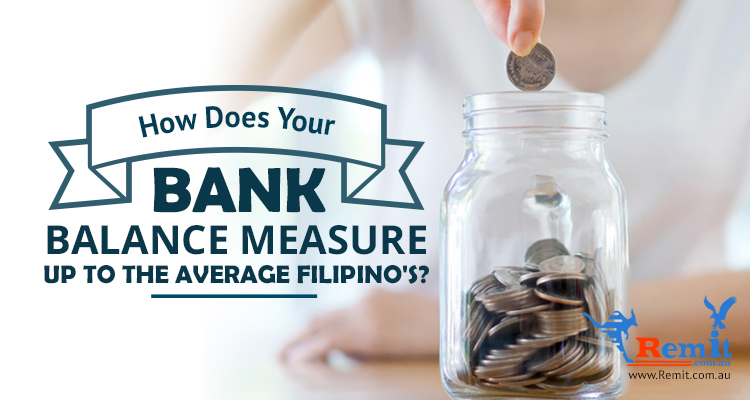 How Does Your Bank Balance Measure Up to the Average Filipino’s?

Depending on where they’re situated, waste bins can be an interesting source of information.

Just to be clear, I don’t spend my spare time digging through other people’s garbage, okay? (Gross.) I’m talking about those little metallic bins beside ATM’s. You see, they just happen to contain discarded receipts that reveal exactly how much some people’s bank accounts contain.

And depending on how much you yourself have stored away, the figures can be either unsurprising or unsettling.

How Much Does the Average Filipino’s Bank Account Contain?

The biggest amount I’ve ever seen on a random ATM receipt was around Php150,000 (about AUD 3,700), while the smallest was, and I kid you not, about Php5.91 (AUD 0.15). Between those two, much of the receipts I’ve laid eyes on reflected amounts leaning towards the lower end of the spectrum.

As it turns out, my observations aren’t far off the mark. According to a survey carried out by the Bangko Sentral ng Pilipinas (BSP or Central Bank of the Philippines), the median deposit of the banked population is Php5,300 (approximately AUD 131).

Now, as a refresher on Statistics, the median is the midpoint of a set of figures ranked from lowest to highest in value. In this case, Php5,300 can be considered a good indicator of the typical depositor’s bank balance. So, if you have about Php5,000 or less in your bank account, you’re in the same boat as several other Filipino account holders.

Out of the Philippines’ 24 million households, only 14 percent or 3.4 million of them maintain bank accounts. The majority remain unbanked due to reasons like geographical distance, insufficient funds, as well as a cultural distrust in financial institutions. Thus, Filipinos generally have very low savings rates, and this is reflected in their bank deposits.

Another (Not So) Surprising Finding

Less than two percent of the depositor population have at least Php1 million (AUD 24,691) in their accounts, but this also gives them ownership over 80 percent of all the deposits circulating throughout the country’s entire banking system.

This little tidbit then pushes the figure for the average deposit up to Php206,275 (AUD 5,093), quite a far cry from the median Php5,300 revealed in the previous section.

Now, in my humble opinion, this reveals two things:

Putting It All Together

With investment options like stocks, foreign exchange, real estate, and the odd side hustle business, banks aren’t admittedly your best bet if you really want to grow your money.

However, a substantial bank deposit can still be a stepping stone in the process of wealth-building. Rather than putting your savings in, say, a sock where it doesn’t earn interest (and can easily be stolen), why not place them in a savings account that allows you to accurately track how much you’re accumulating?

It might be tempting to assume that only those who make a lot of money can create a fortune, but as my Economics professor back in high school liked to say, it’s not how much you earn, but how much you keep. And judging by the sorry state of this country’s savings accounts, we all ought to take a closer look at where our money actually goes.