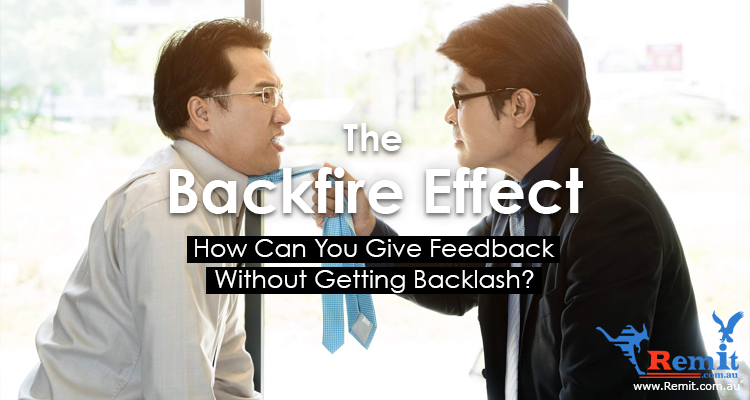 By Leandro Eclipse in Business and Career
April 26, 2018

The Backfire Effect: How Can You Give Feedback Without Getting Backlash

We all have that one friend. That one adamant colleague who doesn’t even budge down in an argument. S/he is a fervent believer in some fake news on Facebook.

You presented all the credible data you can find to save his/her soul. You arranged it impeccably in the most logical way possible. But you’re dumbfounded. Why does s/he not believe you? In fact, s/he became more unbelieving after you presented with the cold and verified facts.

My friend, you are amidst the “backfire effect”.

You heard it right. The backfire effect is our human tendency to shut off ourselves to new information that challenges our current worldview.

In most instances, it’s prevalent in sensitive topics like political or religious issues. After the said discussion, and given the assumingly well-researched data you presented, your friend now firmly believes his side.

It’s no typo. S/he believes HER/HIS SIDE. Your efforts just got backfired.

It’s All about Biology

To understand this illogical human trait, we go back to our human selves.

In a study by the University of South California’s University Brain Creativity Institute, they found out thru an MRI scan that the amygdala is responsible for our sudden intellectual haywire.

For those that don’t know, the amygdala is the part of our brain responsible for our emotions. Triggering the amygdala equates the intellectual threat received similar to a physical threat.

In other words, when you correct a person, s/he feels the same thing as if you threatened him/her with a gun. And given that emotions are faster felt than our logic.  It activates our fight or flight defenses.

Thus, instantly it is perceived as painful rather than just mere new information.

But this does not apply to just any information received. It’s just for the ones that challenge your core beliefs.

Core beliefs are certain assumptions or knowledge formed through cultural, childhood, and experiential origins. These beliefs are so strong that the brain guards and pushes out information not aligned with your belief.

How is it different? Let me illustrate.

For example, someone told you that you should clap three times during a wedding to give the couple good luck. Most likely, you would take it as it is. I mean what’s the harm in clapping for three times.

But, coming from a devout Christian background, what if one person tells you that you can wed people with the same-sex? Certainly, some may get outraged by the mere thought of it.

This “Identity-Protective Cognition” triggers the person to protect himself from the things that will challenge his personal identity.

How Do We Give Feedback Then?

First of all, you must understand and respect each one’s core beliefs, even if you might not exactly agree with them.

The first step: do not attack them directly (unless you want to be enemies). A reliable third party fact checker can be a great tool here for indirect confrontation.

But as we all know by now, humans are heavily emotional beings. So to win them over, you must be mindful of their emotions.

Most likely, know that you can’t change a person’s mind instantly. Try a more subtle approach. Or better yet, instead of disproving the fact directly, why not give out an alternative narrative that is also true?

Repeat these facts subtly in hopes that it might change their mind. Ask leading questions and illicit answer coming from them. At the very least, it will ease up the conversation.

Best case scenario, s/he might actually think about it and have a change of heart.

End of the Day, Only You Can Change Yourself

After all your efforts, not everyone will believe you. Do not be hard on yourself.

Because whether you like it or not, this might also be you. You also have this human tendency.

If you are suddenly surprised with this case in yourself, don’t fight it. Just remember to listen with to inner ramblings. Let yourself feel the negative emotions from this intellectual attack.

Afterward, think logically and hear the information out. Is it logical? Does it have the possibility to be true? This may be hard. But if you find it to be true, maybe you can take the effort to change yourself.

After all, you are the only one who can.