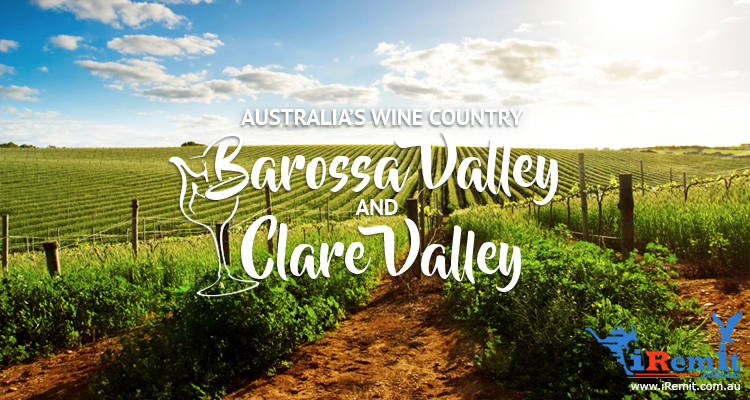 By Serena Estrella in Life in Australia
March 20, 2017

Well, yes and yes. Okay, so beer does go better with barbecue most of the time, but “havin’ a barbie” will perhaps be the last thing on your mind when you discover what these two breathtakingly picturesque wine valleys have in store for you.

For starters, Barossa Valley and Clare Valley are South Australia’s equivalent of the countryside. Picture this: wide, sweeping panoramas of the greenest rolling hills, air that’s rife with the scent of dewy, fresh grass and the mild tang of mineral-rich soil, and just over the horizon, the quaint and lovingly restored towns of Burra and Kapunda (where you can easily stroll in through centuries-old cellar doors of the farm shops and have a glass of wine with the locals who have managed these establishments for generations).

And while South Australia’s foremost wine country is big on rustic charm, it certainly doesn’t fall short on luxury either. Barossa Valley and Clare Valley even have their own version of AirBnB via beautifulaccommodation.com, except you won’t find any dingy, shoebox-sized spare rooms with Spartan furnishings here.

Instead, you’ll see spacious, European-style lodgings like Stephanette’s Cottage (equipped with antique French doors that open onto bedrooms with sumptuous eiderdown pillows and even a hydrotherapy spa tub right on the premises), authentic Barossa heritage cottages with clawfoot bathtubs, crisp linens and Bose speakers, along with a free wine tasting and a tour of the vineyards (ones that are right beside the property, by the way) that produce the said wine, and even a converted 19th century Lutheran church that is anything but austere (think soaking tubs in the bathroom, a gourmet kitchen in the vestry, and a divinely-appointed bedroom in the attic).

Once you’ve settled in to your cushy lodgings of choice, it’s time to get down to the serious business of wine tasting. Barossa Valley and Clare Valley aren’t referred to as the twin cradles of wine production in Australia for nothing, and they each have their own niche in coming up with some of the most potent and flavorful wines the world over.

The Barossa Valley’s vintners’ take on the Shiraz is a must-try for any serious wine aficionado. Imbued with notes of blackberry, mocha, and dried currants, it has a unique smokiness that’s akin to the aroma of a wet red clay pot (and apparently, that’s a good thing).

Thanks to the intense Australian sunshine, bottles of Shiraz from Barossa Valley often have a high alcohol content, around 14-15%, and are known to be intensely fruity. Some of the best bottles have been left to mature for decades, resulting in a smooth, mellow flavor that supposedly pairs very well with plates of local cheese and nuts, all of which you can find at Barossa’s food markets.

Clare Valley, on the other hand, is renowned for its Riesling. If you prefer white wine over red, you’ll find dry, semi-sweet, sweet, or even sparkling varieties of this flowery vintage on this side of the world. The vineyards in this valley are said to produce the finest dry Rieslings in the country, particularly the ones in Polish Hill, Watervale.

Apart from such, bottles of robustly complex Cabernet Sauvignon wines can also be had here, with most of the reviews praising the delicate balance of flavors and the hints of tobacco in the region’s lush red wines.

Sustainability also happens to be a buzzword in Clare Valley, as much of the local produce is grown organically or raised in a free-range environment. Thus, dining here is perfect for all those gourmands with a conscience.

At starting rates of AUD190/night for plush accommodations (not to mention several dollars more for food and wine tasting), spending the weekend in Barossa Valley and Clare Valley sure doesn’t come cheap, but think of it as an occasional treat that you and your companion of choice can save up for. After all, you can’t really put a price tag on an unforgettable holiday in (wine) heaven now, can you?