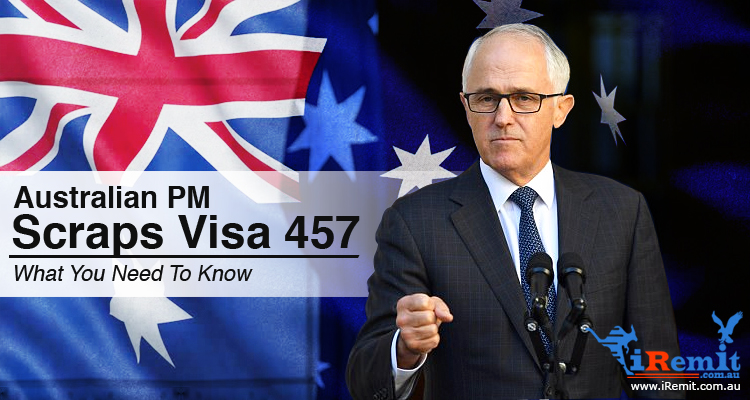 Australian PM Scraps Visa 457: What You Need to Know

Visa 457 allowed local business owners to employ skilled foreign workers for up to four years in industries where there was a shortage of such. It was meant to attract skilled labor into the country by allowing its holders to bring their family members with them on a secondary visa, but there are allegations that it was being used to import cheap labor, thus exploiting vulnerable migrants and leaving many Australians out of a job.

About 95,000 foreign workers are currently on Visa 457, although the Turnbull administration reassures everyone that they will not be affected by the scrapping of the said visa.

In its place, the government has proposed tighter requirements for new applicants. In line with sweeping changes to Australian citizenship laws, applicants for the proposed visa replacement for Visa 457 will have to deal with the following amendments:

There are also plans to restrict the number of times an applicant can fail the citizenship exam. At present, there are no limitations, but under the new regime, an applicant can only afford to fail the test three times before having to re-apply. An automatic failing mark will also be introduced for any applicant caught cheating during the exam.

Turnbull’s decision to scrap Visa 457 is said to be due to his “Putting Australians First” policy as well as to protect migrants from being exploited by unscrupulous employers, but some have speculated that it’s an ill-disguised plea to conservative voters not to abandon the Coalition for Pauline Hanson’s One Nation Party, which has recently declared its “balanced, zero net immigration” stance.

So, how would this affect you as a Filipino migrant/aspiring migrant?

The good news is, you’re safe for now. If you already have visa 457 or a similar working visa, it will still be valid, even after the measure to scrap the former will be fully implemented. There are also other work visa pathways that you can avail of until the dust settles, and so long as your skills apply to the jobs on the Skilled Occupations List, you’ll probably still be able to come to Australia as a skilled worker.

However, you probably need to be more vigilant now. Always make sure that your visas are up to date, fast-track your citizenship efforts if you can, and stay tuned to local news.

Australia remains dependent on migrants for skilled labor and for an economy boost (i.e., migrants typically create more jobs than they take on because of their added consumption in the country), but should extreme right-wing attitudes prevail, it won’t be long before it’ll get very difficult to enter and remain Down Under as an outsider.