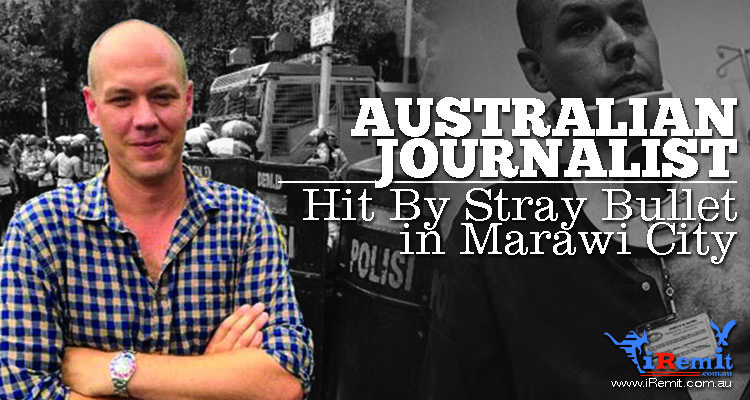 An ABC correspondent based in Jakarta is the first journalist to have been injured while covering the ongoing siege in the Lanao del Sur city.

Last Thursday, the Australian Broadcasting Corporation reporter Adam Harvey was photographing children playing inside the Marawi compound when several gunshots rang out. The capitol is supposedly located far from the conflict-ridden areas, so it’s where government agencies and journalists were based. Harvey and his team had been moved back to the said “safe zone” from the battle front lines that morning, so the journalist had removed his bulletproof vest prior in order to squat and take better photos.

“I was bending down – we stopped and I opened the back door of the car to get some food and water and I felt an almighty stabbing at the side of my neck, and I went down on the ground and I thought I’d been hit by a bit of shrapnel,” he was quoted saying. “I started bleeding and luckily, we had our ABC first-aid kit, so we started doing some first aid.”

The journalist was immediately taken to a medical centre, where the attending medical officer initially thought the wound was merely superficial. Harvey, who likened the sensation to getting hit hard on the neck by a cricket ball, was then transferred to a hospital for further observation.

However, the X-rays would later reveal that he hadn’t been merely grazed by shrapnel, but rather had an actual bullet lodged in his neck, close to his spine.

Luckily, it missed anything important and the ABC reporter managed to stay conscious throughout the entire ordeal. He was later discharged with a neck brace as an added precaution.

Harvey was stationed in Marawi City, a small though strategic Muslim city in the otherwise Catholic Philippines. In the past month, it served as the battleground for the conflict between the country’s government forces and hundreds of militants fighting under the black flags of the Islamic State (IS) group.

So far, at least 26 civilians and 58 security forces have died over the course of the fighting, along with more than 200 militants. Majority of the city’s 200,000 population fled the area once the military began relentlessly bombing the rebel strongholds, but hundreds apparently remain trapped in militant-held areas. The military have also reported that the rebel soldiers have been using civilians caught in the crossfire as human shields.

As the armed conflict in the war-torn portion of our country escalates, we can only pray that our national forces are able to bring it to a halt for the sake of all the innocent parties involved. And soon.