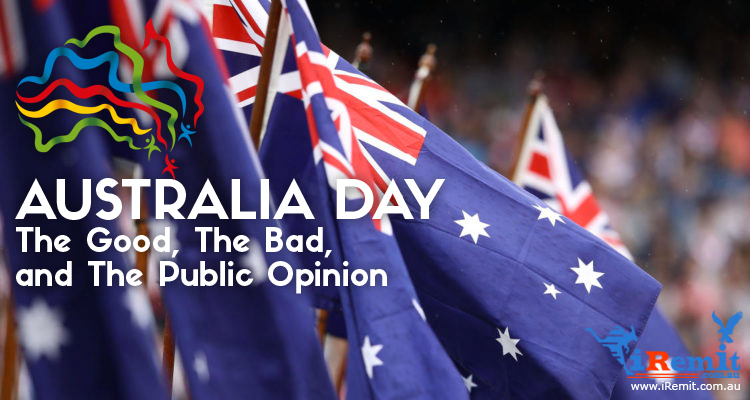 By Leandro Eclipse in Life in Australia
January 25, 2018

Australia Day: The Good, The Bad, and The Public Opinion

Coming Friday, January 26, the celebration of Australia Day will commence! Bring out the Barbie! But before you do, why do we even celebrate Australia Day? If you’re curious as I am, here is what I’ve gathered.

With a group of 1,400 people (mostly convicts), the crowd set foot on New Albion (known as Sydney today).

The Australians celebrated this date, but it was only in 1935 that it was widely known as Australia Day, and following in 1994 onwards regarded as a Public Holiday across all Australian Territories.

Today, this National Holiday aims to be a time of unity amongst all Australians. It is where we go around the streets and party with our fellow brothers and sisters.

It is regarded of high importance. The state even announces the “Australian of the Year” award, similar to the Order of Australia, on this very day.

The day will be blasted with concerts and community festivals throughout all of Australia. Go out and drink a “slab” of beer or munch on Tim-tams and Pavlovas. Indulge on the Barbie while listening to Triple J’s top 100 Countdown for the best music from the past year.

End the night with your town’s fireworks display while you dance and frolic with your family and friends. Certainly, a night to honor your Australian heritage.

But then, this may not be a heritage everyone wants to remember. The settlement of the British means the subjugation of the Aboriginal Australians. Countless have been murdered and discriminated starting this very day.

This led to numerous protests across history. The earliest documented demonstration was by the Aborigines Progressive Association in 1938. It was pronounced to them as a “Day of Mourning” for their ancestors.

This continued up to this day. One indigenous leader, Palm Island Shire Council Mayor Alf Lacey, even remarked: “Do Jews celebrate holocaust?

The outcry moved a number of people to appeal for the change of date of Australia Day. The proposed dates include January 1 (the inception of modern-state Australia, 1901), April 25 (Anzac Day, 1915), and December 3 (the uprising that has been regarded as the Birth of Democracy 1854).

Regardless of which date, as long as the whole of Australia can celebrate true unity amongst all races.

Is this just a severe case of being politically correct? Barnaby Joyce, the deputy prime minister of Australia, states.

But according to a survey by the Australian Institute, 56% percent of the respondents don’t mind when the celebration is as long there is a celebration. Less than half even knew why January 26 was the triumphal date.

This result challenges the notion of January 26 being unchangeable for most Australians. If most don’t even mind, why not just change it? We are not sure.

As of this moment, some small businesses are moving to boycott Australia day. A Spotify playlist titled “Australia Day” was even banned from their service.

After this, do you think it’s necessary to celebrate Australia day on the 26th? This certainly is a sensitive issue that needs to come to a close.