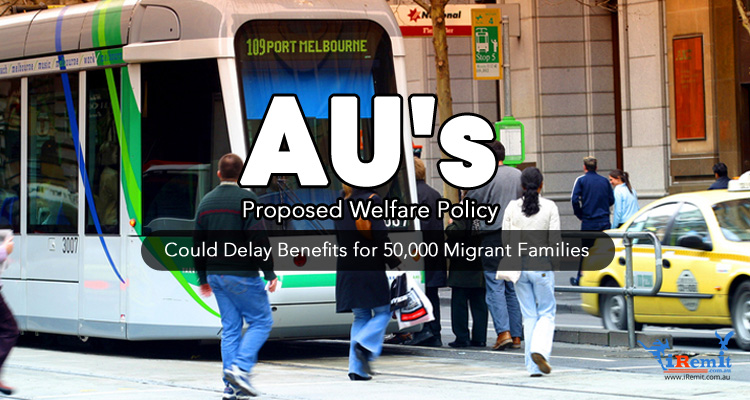 By Serena Estrella in Filipinos in Australia
March 7, 2018

New legislation has been placed before the Australian parliament, and according to such, new migrants will have to wait three years instead of two before they can avail of family tax benefits, paid parental leaves, and carers’ allowances.

This proposal targets new residents, specifically those coming to Australia on skilled or family visas, starting on 1 July of this year. Those on humanitarian visas will be exempted, as are individuals coming in with a partner visa but end up facing a relationship breakdown later on. With the additional 1-year wait in place, the proposed legislation has been forecast to net the Australian government AU$1.3 billion in savings.

Minister Concetta-Fierravanti-Wells spoke out in support of the motion, stating that migrants should already set up their existing resources, employment, and family support prior to entering the country so that they could become self-sufficient without the government’s help.

“Plenty of people have come to this country and not got a cent in terms of support and today are some of our most wealthy in Australia,” the senator was quoted saying.

Understandably, not everyone is onboard with the proposed measure.

“You’ve got people coming here as skilled migrants. How is denying them access to these types of supports encouraging self-sufficiency?” Labor Senator Kristina Keneally posed, adding that she herself depended on social services upon arriving in Australia as a migrant from the US back in 1994.

The Australian Council of Social Services (ACOSS) have also condemned the new legislation as “harsh,” citing that delaying a migrant’s access to government resources will cause him or her to lead a life of difficulties and poverty. “This will hurt people who lose their job, people who need to care for a child with disability, or a family member with a terminal illness,” said Edwina MacDonald, Acoss’ director of policy and advocacy.

Last Thursday, the Department of Social Services revealed during a Senate hearing that they are anticipating a total of 50,000 migrant families serving a waiting period for family tax benefit A by 2021 if the new welfare policy pushes through. In addition to that, about 30,000 individuals are also on a waiting list for similar welfare payments.

Up until recently, Australia was considered an alternative haven for many migrants, given the economic and political upheavals in Western countries like the US and the UK. Filipinos have been among the fastest-growing migrant groups Down Under, with sizable populations in locations like the City of Blacktown, New South Wales, Woodcroft, Western Sydney, and Derrimut, Melbourne, among others.

Should this proposed measure pass into law, its reverberations will surely be keenly felt amongst the different migrant groups all over the country.