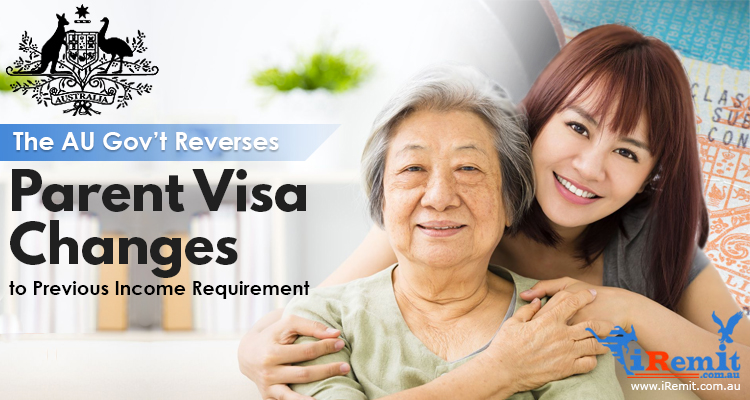 As Filipinos, we are known to be family oriented. As much as possible, we want to be together as one strong unit. We are very tight in our relationships. We take care of family even those outside our first degree.

With this, it’s a given to take care our parents. If you’re working abroad for quite some time now, most likely, you would have petitioned for your parents’ visa to be finally with your them in person. It’s the time to join them together in one household and let them live their remaining years happily in your providence.

But April had been an upsetting month, hasn’t it? If you don’t know yet, the AU government has implemented “shadow changes” in the income requirements for parent visas.

The parents visa is known for its long waiting time before issuance because of yearly application capping.

Those lodging before the April 1 legislation are safe from the changes above. However, if the applicant hasn’t passed the “Assurance of Support” (AOS) document, they will need to suffer from the hefty increase.

Dan Tehan explained that the changes are to make sure that the new migrants can support themselves when settled. It is to avoid the migrate parents to become a drain on the welfare system.

Public Outrage and The Senate

After just a few weeks, multiple individuals and organizations criticized this harsh directive. SBS News estimates that around 30,000 families will be affected with the new ruling. Multicultural Australia is in outrage.

A change.org petition had spread to urge the Senate to reverse the said change. More than 12,000 have signed the campaign relaying their personal stories with regard to their migration life and how this change will affect them.

One even criticized the rule as the current AU government’s strategy to disqualify multiple families with a technicality. A bloody legal battle is about to commence.

Before the ensuing Senate battle, the government backed down with a deal settled by the Greens Senator Nick McKim and Minister Dan Tehan.

In a letter sent by Dan Tehan, he plans to reverse the changes by replication of the circumstances prior to April 1. It is expected release will be on May 23. For those rejected because of the ruling, a reassessment of their application is also in line.