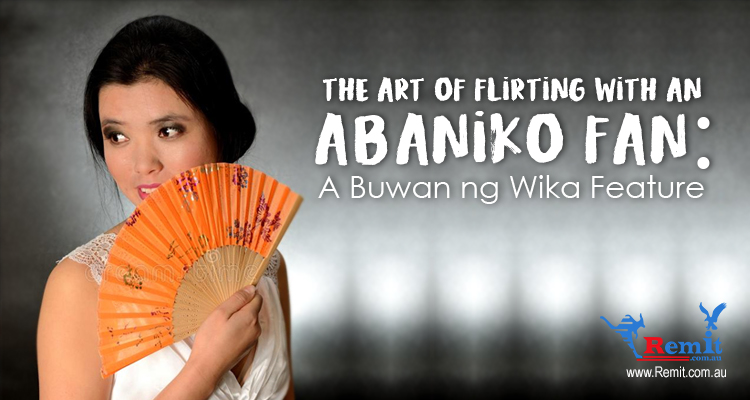 By Serena Estrella in Filipinos in Australia
August 13, 2018

The Art of Flirting With An Abaniko Fan: A Buwan ng Wika Feature

So, it’s Buwan ng Wika (National Language Month) once again. Last year, we did an article on a handful of fairly obscure Tagalog words that ought to come back in circulation. This time, we’ll go further back and dwell briefly on an even more archaic method of communication: the secret language of the abaniko.

The word “abaniko” was derived from the Spanish “abanico,” which means “fan.” As its origin suggests, the Tagalog term pertains to a hand-held fan that was and is often used to accessorize traditional Filipino women’s clothing, such as the terno or the baro’t saya.

The humble fan also served another less obvious purpose: conveying certain feelings or messages that its bearer somehow couldn’t or wouldn’t put into words. We do have to remember that things were quite different in the days when women went about their daily lives in traditional attire. Back then, speaking one’s mind was considered most unbecoming in a young lady, and she and her contemporaries would be encouraged to adopt a modest façade.

To get around this, resourceful young women resorted to a set of subtle yet distinct fan motions in order to send signals to their suitors and their peers. Although the language of the abaniko was rendered obsolete by email, text messaging, and rapidly changing codes of behavior, its gestures can still be found in select archives today.

So, if you ever want to give the art of the abaniko a whirl, here are some messages you can deploy with your fan:

Hold your fan downwards with your right hand if you want to announce that you are single and ready to mingle.

2. “I am in a relationship/engaged/married/it’s complicated.”

If your relationship status on Facebook is other than “single” (or if you just don’t want to be bothered), hold the fan downwards with your left hand.

Closing the fan really slowly is the abaniko equivalent of a  kontrabida’s withering glare, apparently.

Still fuming over your significant other liking another girl or guy’s Instagram pic? Hold your abaniko close to your chest if you want to be all passive-aggressive about it.

Cover half of your face with your fan and let your eyes do the talking for this one.

Go near the person you wish to get to know better and then count the ribs of your fan. Make sure they can actually see you doing this (and that they also know what it means) so that you don’t come off as a rando, though.

Not in the mood for chit-chat? Hide your fan behind your back.

Lending your fan to another person while it’s closed communicates trust and openness, as well as dropping your abaniko to the floor and letting someone else pick it up.

On the other hand, handing over your fan while it’s fully open happens to be a time-honored way to banish someone to the friendzone.

Fanning really quickly while smiling at your suitor or crush is one (not so) subtle way to tell them that you’re into them and would like them to come closer, it seems.

In the days before fidget spinners, abruptly folding up one’s fan conveyed a sense of disinterest in one’s surroundings (or in one’s conversational partner).

Playing with your fan’s fringe or tassel supposedly tells your companion that they mean nothing to you. Ouch.

They say that rapidly fanning your abaniko against your chest is a sign of immense displeasure, but if the object of your, ah, immense displeasure still doesn’t get it, feel free to execute a different kind of abaniko altogether: a striking blow resembling a fanning motion, as employed in the Filipino martial art called eskrima.