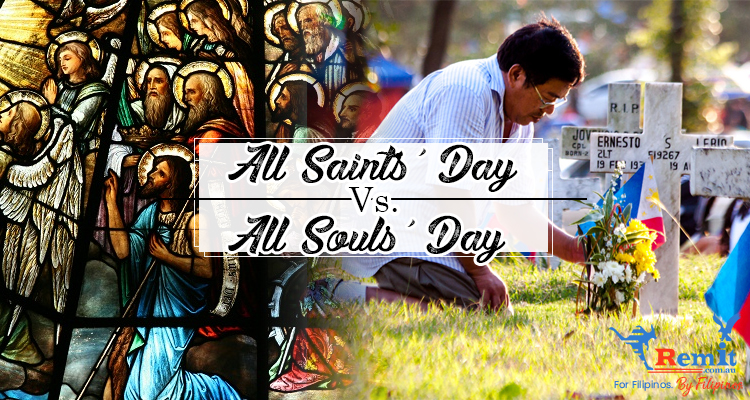 All Saints’ Day Vs. All Souls’ Day

For much of the Western world, the end of October is all about Halloween. You’ve got your usual trick or treating, horror movie marathons, and the odd ghost tour or so.

In the Philippines, however, two Catholic feast days immediately succeed Halloween. They also happen to pertain to matters beyond the realm of the living. You probably know them as All Saints’ Day and All Souls’ Day.

Here’s the thing, though. Even the most devout Filipino Catholics tend to mix them up, but there are some key differences.

Halloween isn’t exactly a non-working holiday in the Philippines, but November 1 certainly is. On this day, Christians celebrate the Feast of All Saints or All Saints’ Day.

Traditionally, the liturgical celebration begins on the evening of 31 October or All Hallows’ Eve and continues until the end of 1 November. While Filipinos typically visit their dead around this time, the holiday is actually for celebrating the lives and deaths of saints.

You see, in the days of the Roman Empire, most believers suffered persecution for their faith. Some even succumbed to martyrdom . Eventually, Emperor Phocas presented one of the early popes with a beautiful Roman Pantheon temple. The latter consecrated it to “all saints” who lost their lives in the first three centuries after Christ.

Thus, many of the deceased faithful’s bones were brought in from other graves and reinterred in the temple. Since there were too many martyrs to be given their own feast days, the authorities just honored them all with one. Pope Gregory III would then change that date to November 1 in the next century.

More interestingly, you’re also supposed to celebrate other individuals throughout Christian history on this day. So, if you had a friend or relative who inspired you to be a Christian, say a little prayer for them too.

November 2, on the other hand, is All Souls’ Day. Strictly speaking, this is when you should actually commemorate your dearly departed.

Basically, on All Souls’ Day, you’re supposed to ask for God’s mercy for those who have passed away and whose souls are still en route to heaven. In some churches, they even open and lay out the Book of the Dead. This is where parishioners jot down their deceased relatives’ names.

Here’s a fun fact: there’s actually a term for the three-day period from 31 October to 2 November. It’s Allhallowtide.

But regardless of how you choose to celebrate, don’t forget to take a moment and remember all your loved ones who are no longer with us.