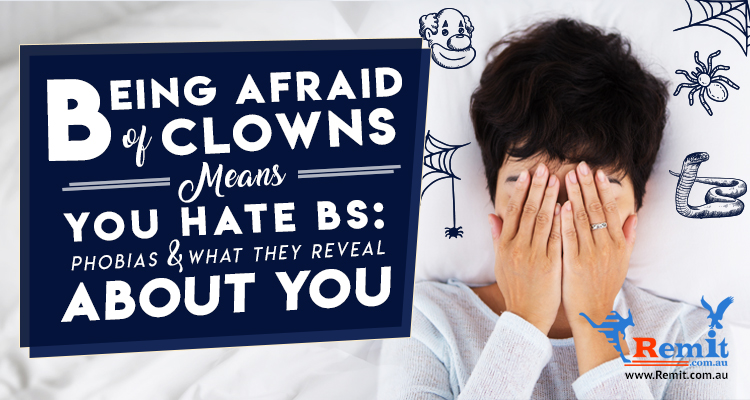 By Serena Estrella in Health and Fitness
September 13, 2018

Being Afraid of Clowns Means You Hate BS: Phobias And What They Reveal About You

Much like love, fear is quite a funny thing when you think about it. Sure, it’s a survival instinct, but let’s face it, phobias or irrational fears are proof that we humans might not be as fully evolved as we like to think we are.

And hey, pretty much all of us have them. You probably know someone who passes out at the sight of blood, or you might say that the mere thought of spiders makes your skin crawl. Apparently, there are even a select few who fear peanut butter sticking to the roofs of their mouths. (I kid you not, there’s even a clinical term for it and pronouncing it makes you sound like you’ve got a mouth full of peanut butter: arachibutyrophobia.)

But are our irrational fears really all that, well, irrational? Or can they actually give us a little more insight into ourselves?

Did watching Pennywise from last year’s “It” give you the heebie-jeebies? You’re not alone. Loads of people suffer from coulrophobia or the fear of clowns, and the rest of us just find them downright creepy. (It’s probably all that make-up….or the mental image of one swallowing you alive while it takes on the form of your worst fears. Yikes.)

Here’s the thing, if clowns make you uncomfortable, you’re likely to pride yourself on your transparency and straightforwardness. A clown’s thick make-up and inscrutably cheerful facial expression, in contrast, can make his or her actual mood and true intentions harder, if not impossible, to discern, and that can be quite unsettling for people who prefer to lay down the cards early on.

Right, you might want to think about booking those boyoyong clowns for your kid’s birthday party then.

Arachnophobia is one of the most common phobias out there, and while spiders actually help us out by entrapping and eating harmful mosquitoes, there are still some of us who would shriek when we see one crawling about our homes.

Historically speaking, however, spiders posed a prevalent threat to our neanderthal ancestors, so much so that the ability to locate them in one’s environment became necessary for survival. Primitive homo sapiens who were able to do so would warn their tribe or their family about such imminent threats, thus emerging as a de facto leader in the process.

Yep, fear of spiders = likelihood that you are descended from a Supreme Caveman Leader. Congratulations.

Perfectionists Tremble at the Thought of Public Speaking.

And why shouldn’t they? Committing a snafu in private is bad enough for most perfectionists, let alone breaking down in front of a sea of strangers.

See, it’s not really public speaking per se that people are afraid of, but the risk of public failure. Sometimes, no matter how much you’ve memorized and rehearsed a carefully-prepared speech, things can still go wrong. Your microphone could malfunction while you’re in the middle of making a point, your voice could squeak like a prepubescent boy’s at some point, your jokes could be met with dead silence, and so on.

So, if you strive for constant approval via painstakingly-planned perfectionism, the unpredictability that comes with addressing a crowd may prove too much to handle.

If you’re all about the details, you’re likely to keep your surroundings clean and probably despise disarray and disorder. Germs, especially the sort that thrive in untidy, unkempt environments, would indicate the exact opposite of what you strive for, thus sparking a near-obsessive urge to wipe them out.

This may sound like a pun, but if your stomach goes queasy at the thought of being above the ground, it’s probably because you’re a very grounded sort of person. (Get it? No? Okay, never mind.)

Self-aware individuals are firmly rooted in what they believe in and who they actually are, figuratively speaking, so they may not take too kindly to being lifted up and separated from solid ground, literally speaking. It’s also quite interesting to note that most height phobics are intelligent people who like to have a firm grip on reality and themselves, hence their resistance towards the loss of control and the plunging sensation that can come from being on a lofty perch.

The Calm and Collected Among Us Can’t Stand the Sight of Blood.

Save for vampires and vampire wannabes, I can’t imagine anyone who would actually bask in the sight of the thick, red stuff seeping from a cut or spattering onto the ground.

However, if you’re especially affected by the presence of blood in your surroundings, you’re supposedly the cool and collected one in your squad, so to speak. As with locating spiders, that woozy feeling you get when you see blood is a primitive response that alerts your brain to danger within your surroundings. This, in turn, is supposed to set off a protective instinct that makes you behave more cautiously and rationally.

Or it could also mean that you’re not cut out to be a doctor, and/or are a guy who doesn’t have to deal with involuntary bleeding (!) every 28 days.

Creatives Are Apparently Afraid of the Dark.

Regardless of your profession, darkness can be pretty unsettling in general. It impairs our vision and thus hampers our ability to understand and adapt to our surroundings.

Creative types fear the dark even more for another reason: their hyperactive imaginations can conjure up the most frightening images to fill the void, be it a murderous clown or a demonic presence masquerading as a nun.

The good news, though, is that you can turn things around by thinking of positive images instead the lights go out, such as, hmm, that murderous clown or demonic nun ripping off the mask and revealing themselves to be your ultimate celebrity crush.

Either that or a glow-in-the-dark donut because who doesn’t like donuts, right?

An Aversion to Snakes Can Mean That You Stand Up For Others.

Okay, I take this within the context that snakes here can refer to the literal reptiles or to traitorous people who lie low till they see an opportunity to strike at those closest to them. Viewing either of those with revulsion could mean that you’re exhibiting the prehistoric fear of creatures that have threatened your ancestor’s lives and/or that you tend to stand your ground when it comes to defending your loved ones from people who would backstab them.

Now, that all sounds really cool, but crikey, what would we make of Steve Irwin then?

So, is there any truth to any of the ever-so-slightly far-fetched analyses presented above? Perhaps so, perhaps not, but that’s not the point is that humor is one of the most effective coping mechanisms for fear. Being able to step outside of yourself and make light of your own demons can make them a lot easier to live with, if you can’t eliminate them entirely.