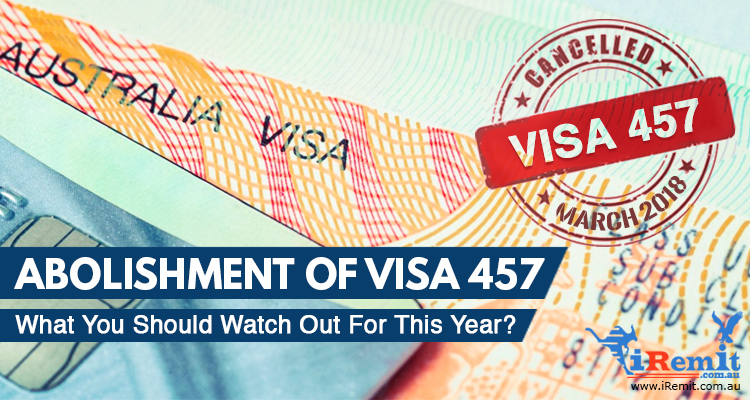 Abolishment of Visa 457: What You Should Watch Out for This Year?

Australia is known as the land down under, a recreational destination for some, but for most, a ticket to a bountiful life; a go-to for most Filipinos for that elusive “greener pasture”. The country has one of the most coveted “working visas” and relatively flexible migration rules for a foreign worker.

If you are planning to work in Australia, chances are, you are applying for visa subclass 489 or visa subclass 457. The main difference with the two is sponsorship versus nomination. For visa 489, it is a point-based skilled visa and only encompasses regional locations of Australia.  If you pass the standards, you are “nominated” by that state to work, and find jobs, for the skill you applied for in their area.

Whereas, subclass 457 allows you to work in all parts of Australia as long as you are “sponsored” by a company.  Subclass 457 went to so much scrutiny. Quite a number of companies used this to acquire cheaper labor. It went to legislation and finally, led to the announcement by Prime Minister Malcolm Turnbull of its abolishment. This article aims to inform the readers about the changes with regard to Visa 457.

From April 19, 2017, the implementation of the announcement commences.  The Consolidated Sponsored Occupations List (CSOL) was renamed as the Short-term Skilled Occupations List (STSOL) and is subject to reassessment every 6 months. The visa class was also divided into a second category called Medium and Long-Term Strategic Skills List (MLTSSL). In the process of division, 216 occupations were removed from the 651 occupations listed prior.

But how will this affect you currently?

For visa APPLICANTS that passed their application on or before April 18, 2017, (but had the jobs they are applying for removed from the list), you are eligible for a refund of your visa application fee.

For NEW GRANTEES of the Visa after April 19, 2017, the length of stay depends on the subclass of the job. If you fall under STSOL, you are given a 2-year work period with a clearly stated non-eligibility for permanent residence and extension. If under MLTSSL, you are given a 4-year work period. A major difference with the former Visa 457 where it is 4-year across all holders.

For Former Visa HOLDERS before April 19, 2017, you are still merited to the conditions of your working visa. You can still work up to 4 years in Australia. Although, the problem lies on extension and permanent residency as no clear “next step” are set for the current 457 Holders.

By March 2018, the 457 Visa will be completely abolished and replaced with the TSS Visa. There are two classes under this visa: Short-term Stream and Medium term Stream. As defined by the Australian Department of Immigration and Border Protection.

“The Short-Term stream is designed for Australian businesses to fill skill gaps with foreign workers on a temporary basis, where a suitably skilled Australian worker cannot be sourced.”

“The Medium-Term stream will allow employers to source foreign workers to address shortages in a narrower range of high skill and critical need occupations, where a suitably skilled Australian worker cannot be sourced.”

Also, only the Medium-Term stream will have a permanent resident pathway after three years, another difference from the past legislation of 2 years. Furthermore, the employee is required to garner at least 2 years relevant work experience for the job.

Effects in the future

This change ultimately means that employment and migration might be stringent for the coming months. But don’t you fret. As Filipinos, we have a certain level of excellence and work ethic that is at par with, or sometimes better than, global standards. You’ll never know. We might just put this behind us because we might not be affected at all.

Disclaimer: The article just aims to inform the reader of the RECENT changes in Visa 457. Succeeding announcements of implementing rules for this visa may render the information, in part or in full, obsolete.