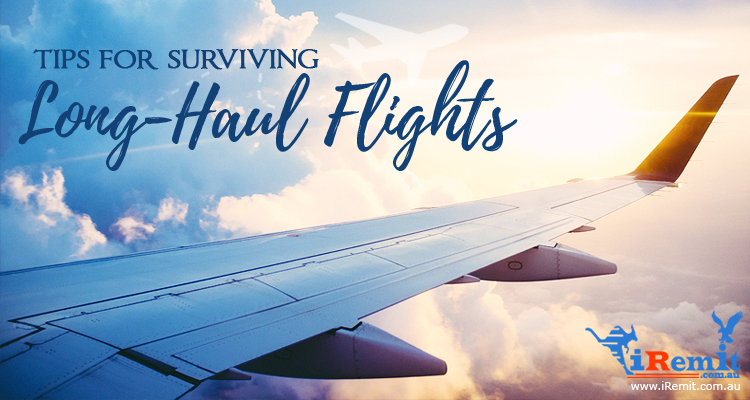 By Serena Estrella in Moving Down Under
February 10, 2017

8 Tips for Surviving a Long-haul Flight

The longest flight I ever took was from Manila to San Francisco, when I was visiting some relatives abroad. If I recall correctly, it took about sixteen (16!) hours total, and that’s not counting the trip back.

Unless you have a First Class ticket (which I didn’t have at the time), it’s a lot of endless shifting in a cramped seat while attempting to sleep and holding your elbows in whenever meals were served, lest you accidentally tip your seatmate’s drink over.

Now, flights from Manila to Sydney take only half as much time, but those eight hours still constitute an entire working day. Whew.

Whether it’s your first or your fifteenth time flying to Sydney or Manila, you can perhaps benefit from the following tips to make your long-haul flight a lot more bearable (and perhaps even comfortable):

Thankfully, many airlines offer this option regardless of how much your ticket is.

As a rule, the middle of the plane is your best bet for avoiding the worst of occasional airplane turbulence (those seated towards the tail end usually have to deal with that. Yowch). If you want more legroom, the seats at the front of the cabin and near the exits usually offer this, sometimes for an additional fee (which is well worth it if you can stretch out a bit more during a long flight).

Also, some people prefer the window seat, but I also like aisle seats since they make it easier to go to the toilet mid-flight.

2. Don’t bring too much stuff in your carry-on luggage.

Sure, you save a few pennies if you opt out of checked baggage fees, but are they really worth the discomfort of having less legroom when you have to stuff anything under your seat?

We’re talking neck pillows, eye masks, noise-cancelling headphones, a fully-charged iPad loaded up with an entire season of “Game of Thrones” (might as well put those idle hours to good use), whatever it takes for you to make all those flight hours whizz on by.

I even have this one aunt who likes to bring her Korean face masks onboard so she can deep-moisturize or something before landing. Talk about freshening up.

4. Rest up before your flight.

If you think an eight-hour flight is the perfect opportunity to sleep off a hangover or catch up on your zzz’s after an all-nighter, you are very much mistaken, my friend. While you should seize the opportunity to grab a quick nap on the plane, the rather cramped seats, occasional turbulence, and the wails of jittery babies and toddlers aren’t exactly conducive to beauty sleep, making you extra cranky upon landing.

So, unless you’ve booked one of those ultra-luxurious (and ultra-expensive) first-class seats where you get an entire room with a bed, a shower, AND a set of moisturizing pajamas (yes, as in pajamas that moisturize your skin while you sleep), try to get the recommended eight hours of shut-eye before you arrive at the airport.

5. Consider a sleep aid (but be sure to test it beforehand).

If your flight schedule is too hectic to allow for proper slumber prior, you can also take a sleep aid with you, but try it out first.

Sleep aids can have varying effects on individuals, so be sure that your chosen drug relaxes rather than overstimulates you. Thus, testing your sleep aid of choice at least a couple of nights before your flight ought to spare you from any adverse side effects while onboard.

6. Load up on water and Vitamin C.

Recycled cabin air can dehydrate you fairly quickly, so guzzle up the H2O (heck, it’s free and you can keep asking your flight attendant to refill your glass, but please do so nicely). Some experts also recommend alternating glasses of water with thirst quenchers like Gatorade to maintain your electrolyte balance and thus prevent blood clots that lead to deep-vein thrombosis (yep, you can actually die from cramped economy-class seats. SMH).

Oh, and don’t forget to pop a few Vitamin C capsules. Because of rather poor ventilation and the sheer number of people that use them each day, airplanes are a cesspool for disease and infection. A double dose of 500-mg ascorbic acid ought to protect you from the worst of it.

7. Steer clear of alcohol and caffeine.

Okay, so all that free booze might be tempting, but because there’s less oxygen in an airborne plane, you tend to get drunk faster and in most cases, this can worsen any dizziness or altitude sickness you may already have.

Ditto with caffeine. It’s a diuretic (i.e., it makes you pee more), so you’ll get dehydrated faster than you can say “triple-shot espresso” if you insist on your caffeine fix.

8. If you’re traveling with children, pack extra clothes for them and yourself.

Don’t forget their “must-haves” too. What could possibly make a long-haul flight even more stressful? The presence of small children, especially if they’re yours.

Bringing along their cherished toys and I don’t know, their favorite socks (the ones with the unicorns or cheeseburgers or whatever), should be a given since these help soothe toddlers throughout the stress that a long-haul flight can bring. Having a few extra changes of clothes in your carry-on luggage for both you and baby (don’t forget to pack a jacket in case the plane gets too cold) is also a must, just in case your little one gets sick and throws up on both of you. (Hey, it happens.)

Traveling might sound like a hassle, but it remains to be one of the greatest joys in life since it allows you to see more of the world and expand your horizons. Long-haul flights are a small price to pay for this unique sort of education, and thanks to the guide we’ve just given you, are now bound to be an even smaller inconvenience, if at all.