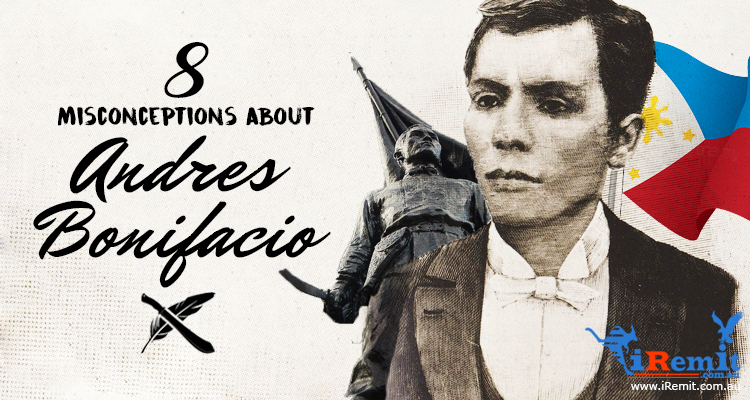 His face is on the new Php5 coin, and we celebrate his birthday every year, but how much do we really know about Andres Bonifacio? Or rather, is everything that we were taught about the founder of the Katipunan actually true?

It’s been said that history is a process where complex truths are condensed into falsified generalizations, and Bonifacio’s case is certainly proof of this. Let’s take a look at some of the most popular assumptions about this national hero, and how well they hold up against the hard facts:

Popular belief depicts the Leader of the Katipunan as a downtrodden indio who could barely afford to eat three times a day. It might seem like a romantic view: a hero rising from the masses to fight against the day’s powerful tyrants, but it’s not exactly accurate.

Rather, Bonifacio was born to a half-Spanish mother and his immediate family was actually middle-class. He and his siblings did struggle when they were orphaned at an early age, but the future Katipunero was never a blue-collar worker. His stint as a bodeguero, for instance, involved running and managing a warehouse for a German-owned company.

Poor Andres. His contemporaries, as well as historians, often belittled his education and intelligence. Aguinaldo’s close associates alleged that he had no academic credentials to speak of, and Teodoro Agoncillo went so far as to label Bonifacio as “almost illiterate” in his “The Revolt of the Masses: The Story of Bonifacio and the Katipunan.”

Now, Bonifacio’s father was a prosperous tailor, and while he was alive, he hired a private tutor to educate his son. There is some truth to young Andres going no further than the modern equivalent of the fourth grade, but that didn’t stop him from being a voracious reader.

In fact, some of Bonifacio’s favorite reads included Victor Hugo’s “Les Miserables,” “The History of the French Revolution,” Eugene Sue’s “The Wandering Jew,” and of course, Rizal’s Noli and Fili. Hardly the reading list of a “Bobong Katipunero” (stupid revolutionary), no?

People like to categorize our national heroes into two camps: pacifists like Rizal who expressed their love for country through writing and militant soldiers who sought independence through more violent means. Bonifacio is often pigeonholed as the latter, when the truth is, he was both.

The sword, figuratively speaking, wasn’t the only weapon in Bonifacio’s arsenal. He occasionally penned some works of his own, such as “Pag-Ibig sa Tinubuang Bayan (Love of Fatherland),” “Ang Dapat Mabatid ng Mga Tagalog (What the Filipinos Should Know),” and “Tapunan ng Lingap (Care a Little).”

Virgilio Almario, a National Artist and a chairperson for the Komisyon sa Wikang Filipino (Commission on the Filipino Language), even judged Bonifacio’s works to be easier to grasp for the masses than Rizal’s prose.

4. The bolo was Bonifacio’s weapon of choice.

Speaking of swords, Bonifacio hardly ever used them at all, preferring firearms, specifically a revolver, for use in battle.

5. The camisa de chino with the red shorts and scarf was Bonifacio’s #OOTD.

For all his fame, we only have one surviving photograph of Andres Bonifacio, and he sure isn’t wearing the Katipunero uniform (™) of a white camisa de chino with a red scarf in it.

Instead, the revolutionary hero appears to be wearing a rather smart coat and tie. The historian Isagani Medina also wrote about how Bonifacio was a fastidious and neat dresser who carried an umbrella regardless of the weather. Costume designers, take note.

6. The Supremo first declared for Philippine Independence in Pugadlawin.

When you think about Bonifacio inciting others to revolution, the image that comes to mind is usually that of him and his followers tearing up their cedulas in what is now known as the Cry of Balintawak.

In reality, Bonifacio’s first declaration of independence was far simpler and more restrained, and it took place in Montalban’s Pamitinan Cave.

7. Bonifacio was a poor leader who lost most of the battles he led.

When I was in primary school, my history teachers would often say that Aguinaldo’s popularity over Bonifacio was due to the latter’s inability to win battles on the field. The Philippine Republic’s first President apparently didn’t have that problem.

What a lot of people apparently fail to grasp is that Bonifacio simply used a different strategy. Rather than face the enemy on an open field and risk his troops getting decimated by their superior weaponry, he preferred guerilla warfare, which relied on the local knowledge of the terrain and the resources they could draw from such.

Controversy followed Bonifacio all the way to the grave. While we now know that Aguinaldo admitted to ordering his execution, the details of Bonifacio’s death remain murky.

One account involves Lazaro Makapagal and his men bringing Andres and his brother Procopio into the mountains, where they were both shot after being told to run. Another one is far grislier: Procopio was indeed shot first, but his brother was hacked to death with a bolo.

As Bonifacio was recorded to be sustaining grave injuries (a gunshot wound in his arm and a stab wound in his neck) at the time of his execution, it’s unlikely that he was able to run. An eyewitness account from a farmer who happened upon five men hacking someone to death in a hammock as well as the fractured bones from Bonifacio’s remains also corroborate the second narrative.

About 154 years have passed since Bonifacio was born, and more than a century since his untimely death, yet his rivals’ efforts to discredit him have been so successful that they’ve made it into our history books.

Today, as most of us enjoy a holiday in his honor, perhaps we can also take a moment to understand the man who spent his short life in the pursuit of our nation’s independence a little better.