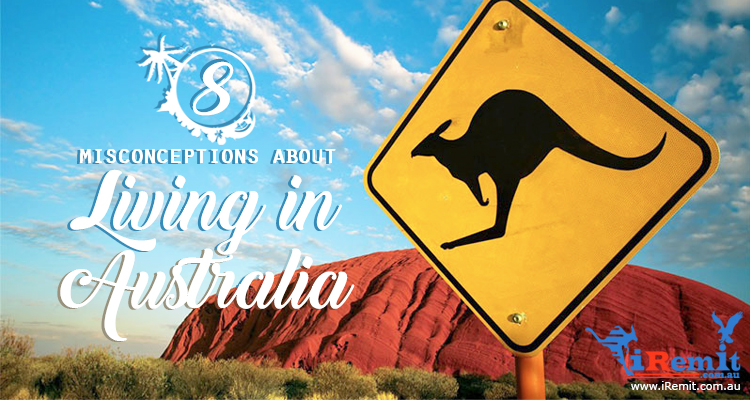 By Serena Estrella in Life in Australia
April 11, 2017

8 Misconceptions About Living in Australia

With the US in a state of political turmoil and with the UK having left the EU, many would-be migrants are now drastically looking for other options. While Australia has always been favored by many Pinoys (among other nationalities) looking for greener pastures, the country’s relative political and economic stability and boundless natural beauty make it look positively golden when compared with the rest of the world.

On the other hand, there are also some expats who are wary of migrating Down Under because they seem to think that you have to be like Steve Irwin to survive there. Crikey!

As we debunk the following misconceptions about life in Australia, you will see that it fits into neither of the two extremes. As with any other country, there are things in it that you are bound to love, as well as things that you simply have to adapt to:

1. Aussies live on the Outback.

For many Filipinos, especially the Manila dwellers, our main exposure to Australian culture lies in a chain of restaurants known as the Outback Steakhouse. There’s also the occasional movie about Australia that stars Hugh Jackman in all his bronzed, chiseled, crocodile-wrestling glory in, you guessed it, the Outback.

The truth is far less romantic. The Outback might be 1.2 million square miles big, but only one percent of Australians actually live there (plus, it’s a desert so it’s not likely to sustain a lot of humans anyhow). Half of the population lives in the continent’s highly-urbanized cities and about a third of them resides in Sydney and Melbourne. So, it’s safe to assume that very few of them have had to do a Steve Irwin on the daily commute to work.

We are also sad to report that not all Aussies look like Hugh Jackman or Chris Hemsworth (or Miranda Kerr, for all you male readers out there). What a shame.

2. Dying from a snake bite is common in Australia.

During a refugee crisis some years back, there was a government campaign featuring tales of terrifying wildlife. It was presumably meant to deter potential refugees from seeking shelter in Australia, but it was so successful that even would-be tourists got scared off too. (Users on the popular 9gag website jokingly refer to the country as “Nopeland.”) That’s probably where this myth began.

Don’t get me wrong, though. The world’s most venomous snake does call Australia home, and the inland taipan’s venom can kill a hundred grown men. (Well, Miranda Kerr’s booty can slay about a thousand more, so there must be something in the water here). But unless you live in the wilderness (see previous item), there’s very little chance that you’ll run into this surprisingly shy creature (the snake, not Miranda Kerr).

On the off-chance that you do get bitten, there is an anti venom that can save you, provided that you act fast. Thus, only about 50 deaths caused by snakebite are reported annually.

Nope, the country’s position on the globe has no effect on toilets at all. The loo, as an Aussie would call it, flushes in the same manner as everywhere else.

So much for what that Simpsons cartoon, eh?

4. Aussies are always on the beach.

For every person who thinks that Aussies live on the Outback, there are about two more who believe that Australians “throw prawns on the barbie” as they frolic on the beach all day.

Australia might rank high on international happiness surveys and as a popular vacation destination, but the same can also be said for its position among the hardest-working countries in the world. While Aussies are one of the most laid-back and informal people, their working hours are among the longest in a survey of 27 Western countries.

Like many of us, the citizens of Down Under have too many tasks and concerns (such as keeping up with the rent) to simply drop everything whenever they feel the urge to hit the waves.

5. You can find kangaroos and koalas in the backyard.

Sorry to disappoint you, but Aussies don’t exactly have a “Bring Your Koala to Work” day.

Again, this country is MASSIVE, so the extant wildlife here is scattered throughout the land. Kangaroos and koalas have long been symbolic of Australia, but they are actually very hard to come by if you live in an urbanized residential area.

6. You have to be sponsored by a company for you to move to Australia.

There’s no denying that being sponsored by a company will open a lot of doors for you here, but it isn’t the only way in either.

Another alternative is to apply for a student visa, and then gradually find part-time work as you study. If you do really well at both endeavors, the company you work for could very well end up sponsoring you after all.

7. Finding a job in Australia is incredibly difficult for migrants.

You don’t need to have a network in place before you move here so that you can find a job. You can even search online through www.seek.com.au. As Australia’s largest job website, it’s a great place to post your profile so that potential employers and recruiters can get in touch with you. Lots of small and medium Australian enterprises as well as job placement agencies use the site, so your chances of getting employed are fairly high if you register here.

If you do have leads or other options, however, nothing should stop you from applying to as many companies as you can by mailing them a well-drafted curriculum vitae (CV) and cover letter in the meantime.

As with anything worth getting in this life, landing a good job in Australia is all about the hustle.

8. You can get broke really quickly if you don’t find a job right after you move here.

Sydney alone may rank as the 17th on the global cost of living index, and living in Australia is far from cheap, but there are also lots of precautions you can take to avoid breaking the bank.

Choosing the right place to live is a crucial decision, for instance. Renting a place in Brisbane, for instance, will certainly be cheaper than leasing a place in Sydney or Melbourne’s Central Business District. Living in a shared house, making your own meals, going easy on those nights out at expensive clubs also go a long way towards stretching your budget. You will certainly have to watch your budget, but you don’t have to deprive yourself of necessities and perhaps a few token luxuries every now and then.