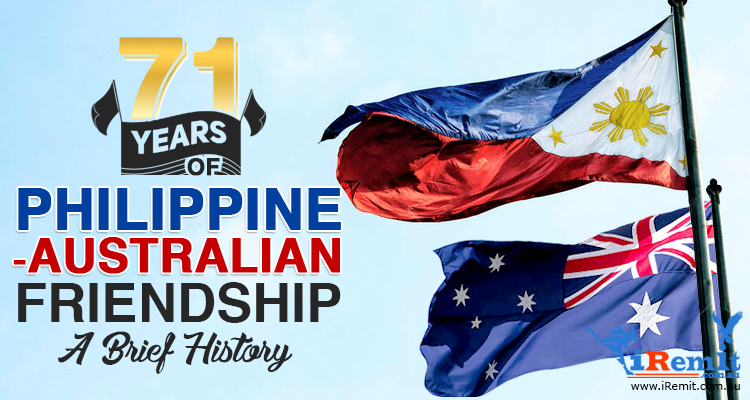 Whenever I hear the words “Philippine-*insert another nationality save North Korean* Friendship Day,” I invariably think of a supermarket showcase where anything vaguely *insert another nationality save North Korean* (Japanese mayonnaise, Chinese beer, “Australian Harvest” oatmeal, etc.) is trotted out underneath colorful banners or tiny flags for added effect.

Jokes aside, being on good terms with one’s neighbors (or, this case, neighboring countries) is crucial not just for peace of mind, but also for development and prosperity.

So, in honor of today’s 71st(!) Philippine-Australian Friendship Day, let’s take a look at how exactly this camaraderie began, and where it has taken all of us:

Diplomatic relations between the two countries were first established on May 22, 1946, when the Australian Consulate General opened in Manila, Philippines. However, not a lot of people know that the bonds between Australia and the Philippines were in place long before that, with over 4,000 Australian servicemen fighting alongside the Filipinos and their allies for their country’s liberation in World War II.

When the White Australia Policy was relaxed a few years later, Filipino students came to Australia under the Colombo Plan. This allowed students from the neighboring Asia-Pacific countries to pursue further studies Down Under, all for the sake of strengthening economic and social cooperation within the region. Skilled tradesmen and professionals were also brought in from the Philippines during this time, and it paved the way for the next wave of migration.

1973 was an eventful year for Philippine-Australian relations. This year marked the official end of the aforementioned White Australia Policy, thus removing the restrictions on FIlipino immigration. And because Martial Law was declared in the Philippines in the previous year, many Filipinos fled to Australia to seek a new life (and some would say, to escape persecution).

From then on, the Philippine-born population in Oz, particularly in Victoria, has swollen dramatically. From a mere 3,455 in 1981 to over 38,004 people in 2011 alone, the Family Reunion Program led to an influx of Filipino spouse/fiancee arrivals within the area.

Today, the majority of Filipino migrants reside in the Western suburbs of Melbourne, and about 73 percent of them speak their native tongue. They identify mostly as Catholic and are primarily under 40 years of age.

Apart from providing a new life to thousands of migrants and their families, Australia has also continued to render aid to the Philippines in various ways. When Typhoon Yolanda devastated Tacloban back in 2013, Aussie medical mission teams flew in to assist both local and international humanitarian efforts within the province. The country was also the largest bilateral grant donor to the Philippine education sector back in 2014, when Australian aid was topped off with about AU$150 million (PHP6 billion) through the Basic Education Sector Transformation (BEST) Program.

With such a long and steady history of goodwill between the two countries, one can only hope that the friendship between Australia and the Philippines will continue to hold fast against the current ongoing turbulence in the international community and thus benefit both nations in the years to come.