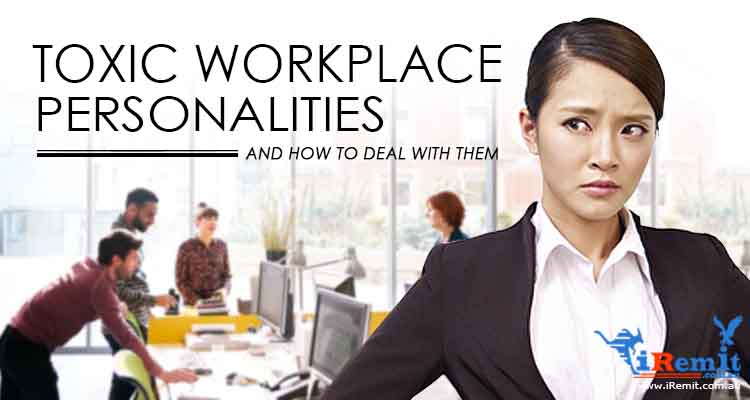 7 Toxic Workplace Personalities and How to Deal With Them

Much as we would like to think that politics is strictly confined to the halls of the Senate and Congress, anyone who’s worked in an office for at least 24 hours can tell you that office politics can be just as cutthroat and underhanded as anything you’ll see on the six o’clock news. Getting through a week’s or even a day’s worth of tasks can be challenging enough, skillswise, but that becomes close to impossible when you’ve got, erm, difficult co-workers to deal with.

Thus, we’ve compiled a list of toxic workplace characters, and how you can protect yourself (and your job) from them:

How to Spot One: With their ears pressed to the ground (or perhaps the cubicle wall?), this colleague could give Gossip Girl a run for her money. Sure, it pays to be informed and a bit of harmless gossip can maybe liven up a dull day at the office, but the trouble begins when The Gossip starts embellishing the truth with the sort of details that could ruin someone’s reputation or turn people against them.

How to Deal: First, accept that workplace gossip can’t be controlled and that most of it is impersonal. The driving force behind many a Gossip King or Queen is either insecurity over their own lackluster performance at work or a desire to bring about a tense situation for their own enjoyment.

It also helps if you stay out of gossipy conversations. If you share a cubicle with The Gossip, consider bringing your earphones to work to tune them out and don’t share much personal information in your conversations with them. Should they add you on Facebook, you can either ignore the invite or put them on your “Restricted” list.

On the other hand, if there’s something you want the entire office to know, but would rather not be the one to tell everyone, that’s where The Gossip comes in handy. Swear them to secrecy, make your bit of info sound as juicy as possible, and then sit back, and watch them do all the work.

How to Spot One: This person can make any work-based conversation feel like a Tinder date prelude. One moment, you guys are talking about following up this week’s expense reports and the next, s/he’s dropping hints about inviting you over to their private beach getaway this Saturday.

It doesn’t matter whether they’re single, married, or in a “committed” relationship. Office Flirts thrive on straddling the line between friendly professionalism and outright flirtation, and the 21st-century world of private messaging, emails, and social media give them the perfect cover to indulge this inclination.

What to Do: Don’t get taken in by their suave moves. Having someone flirt with you is great for the ego, but don’t think for one second that you are the only one they’re eyeing. Office Flirts often have a big, black book of past and present workplace conquests, and it is not in your best interest (personally or professionally) to be included in it.

So, when the Office Flirt comes calling, either by the water cooler or through random IM’s, be polite and cordial, but keep steering the conversation back to work matters. They’ll soon grow bored and leave you be in search of easier prey.

How to Spot One: Maybe it’s their need for excitement or attention, or they might even have histrionic personality disorder, but these people always seem to be in a midst of a crisis.

Oh, they can be quite funny, entertaining, and perhaps even charming when they’re in a good mood, but they also tend to fly off the handle in a dramatic and angry fashion the moment you ignore or slight them, whether you meant to or not.

What to Do: Never try to meet them head-on with your own rage. Instead, remain calm and counter their histrionics with cold facts and logic. Drama Queens and Kings are prone to bad decision-making as they are slaves to their emotions, so emulating their approach will only drag you down with them.

Should you need to deliver any constructive criticism about their work, pad it with a bit of praise for the value they bring to the workplace to make it go down easier (and thus spare yourself from yet another tantrum).

How to Spot One: Arguably one of the most toxic workplace personalities to deal with, control freaks are often unreasonably critical of people who don’t do things their way. They also tend to nitpick; you could give them the world on a silver platter and they will complain that you could have used a gold one.

And unlike the other people that were mentioned earlier on this list, it’s harder to avoid a Control Freak since they often take the guise of your direct supervisor or boss. Yikes.

What to Do: Avoid ambiguity, and give relevant, straight, and most importantly, accurate answers when asked. Control freaks bolt at the first sign of hesitation or uncertainty so be very, very thorough and deliberate in carrying out tasks that are assigned to you.

It also helps to develop a thick skin. If relinquishing control over a task or a situation won’t affect you adversely or at all, then by all means, let go.

How to Spot One: Looking forward to the long weekend? So does the egomaniac, only s/he is set to spend it in a luxury resort that the boss is also heading too, and oh, they’re also set to play a few rounds of golf there. On a high after your supervisor praised your latest sales presentation? Congratulations, says the egomaniac, before quickly diverting the conversation back into how s/he “absolutely killed it” at this morning’s client call.

Egomaniacs like to crow a lot about themselves, make themselves look good, and generally avoid taking responsibility for anything that detracts from the glorious self-image they’ve built up inside their heads. Thus, they’re more keen on finding someone to blame rather than actually coming up with a solution.

What to Do: You are going to need a lot of patience with this one. To force them to make a decision that you prefer, you can try stroking their ego. (“But, Boss, you’d absolutely top in the office if you let us have this year’s party at the club instead of at the old conference room.”)

Rephrasing a request as something that benefits them or would make them look good can also help get things done as egomaniacs respond well to thoughts of social approval or praise.

Whatever you do, don’t try to burst their bubble. Doing so will only make them seek out a target to vent their frustrations on, and they will almost certainly choose the very person who made them question their delusions of grandeur.

How to Spot One: Ideally, a good workplace is where everyone’s responsibilities are clearly defined and work is commensurate to one’s pay grade. A Taskmaster is someone who upsets this delicate balance.

They can be a bit hard to spot at first, but look out for that one person in the office who keeps begging off from work because they’re “too busy.” Upon closer inspection, though, you’ll find that it’s all a ruse so that someone else ends up having to pick up the slack.

Another variation on this office personality is that bubbly, outgoing colleague who takes advantage of everyone’s esteem by charming them into doing most, if not all, of his or her assigned tasks.

What to Do: Be polite but firm in saying “no” when they start to make a habit of passing on their work to you. (“I’m afraid I have other things to do, but I’m sure you’re capable of finishing that on your own.”)

Take care not to fall for this person’s formidable charm and steer clear of them, lest you get suckered into doing their assigned tasks and then some.

How to Spot One: We use this term loosely, as only about 3.3% of adults count as diagnosed psychopaths, but this sort of toxic colleague might as well qualify. Psychopaths lack empathy and remorse, so they have no qualms about taking credit for someone else’s hard work, throwing a friend or coworker under the bus to save themselves, and even stealing the company’s clients just to get ahead. Think Frank Underwood from Netflix’s “House of Cards.”

What to Do: Effective communication with psychopaths, pseudo or otherwise, is close to impossible since they can never be made to see the error of their ways. However, what you can do is to set very clear boundaries. Make it clear that you won’t be drawn into any unethical or potentially self-destructive schemes that they may come up with. You can say things like, “No, I’d rather not get involved. That crosses a line for me.”

Toxic colleagues will always be part and parcel of the job, even in the world’s best companies. Sometimes, talent and an inherently good nature (heck, even common courtesy) don’t go hand in hand, and supervisors often have to put up with the former at the expense of the latter.

While you certainly can’t control how your co-worker behaves, you can control how you react to them. As Michelle Obama once said, “When they go low, we go high.”

Words to live by indeed.