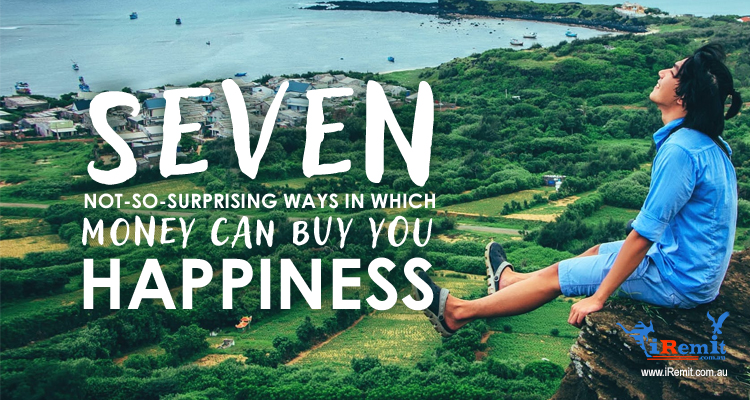 It’s been said that the late Princess Diana once had a throw pillow embroidered with the words “Whoever said money can’t buy happiness didn’t know where to shop.” It’s certainly cheeky, funny even, but is there any truth to it?

I’ve found that there are two extreme schools of thought where the correlation between money and happiness is concerned.

One espouses that money is the root of all evil, with its adherents practically sealing themselves off from the world and, I dunno, living off roots and berries in some secluded forest. Some of them also like to condemn people who work hard for their financial goals, dismissing them as greedy, unfaithful buggers for not trusting that some higher power will magically provide for all their earthly needs. Yikes.

The other end of the spectrum is what I would describe as a rap song playing like a broken record: money, money, money makes the world go round. Mo’ money, mo’ honey (whether this refers to love or something far less noble, I have no clue), mo’ bling, etc., etc. Talk about a hedonic treadmill.

As with many things, the real answer lies somewhere in between. Money CAN buy you happiness…if you spend it on the right things, such as the following:

No one likes worrying about how to pay off the rent at the end of the month or where the next meal will be coming from, so saving up and investing in the right assets and/or building a business, which can provide you with a sustainable and substantial cash flow, can go a long way in ensuring happiness, or at the very least, peace of mind and contentment.

What would you study if you didn’t have to worry about earning money? How to play the guitar? How to paint? Or something as niche as free-diving, perhaps?

As you can imagine, all those things cost money. Guitar lessons, drawing lessons, and scuba-diving lessons require qualified instructors, equipment, as well as time off work. Thus, if you’re financially stable enough to be able to afford all of those, you’re likely to have the freedom to study or practice a skill or activity for its own sake (i.e., because you like doing it), and not really because you need it for your job or to earn more money.

Doing something you love sure beats just lounging around a McMansion all day with nothing to do, yes?

Bill Gates still has the same number of hours in a day as we plebeians do, but one of the most underrated ways for spending extra money is in the pursuit of extra time.

How, you ask? Say, you hate doing chores around the house. Being able to hire helpers to do them for you frees up more of your time to spend on other, potentially more pleasurable things (see previous item). Hate cooking but would still like to eat good food? Delivery apps can help you have your cake and eat it too, so long as you’re willing to pay a little premium.

The point is, don’t underestimate how money spent on eliminating tedious and meaningless tasks can make a difference in your life.

Helping other people can get you out of your own head and make you forget about your own problems for a while. Sometimes, giving to the less fortunate can also make whatever you were worrying about appear significantly less troublesome.

Being able to see the impact that your donation has had on someone else’s life can also give yours more meaning, and what sort of person wouldn’t find fulfillment, if not joy, in that?

5. Quality time with people you care about.

Humans are social beings by nature, and a great deal of what makes experiences so memorable is who you share them with.

While spending time with someone important to you doesn’t have to cost a dime, it does feel great to treat your parents to a full-course meal at a nice restaurant (especially after they’ve been providing for you for years) or to be able to take the family on an unforgettable trip abroad. Being financially secure means that you don’t have to worry about missing a day of paid work just to be with your loved ones too.

Remember when you bought your first smartphone or your first car? How your heart pitter-pattered whenever you laid your eyes on it during the first months? You probably still like your gadget or your wheels now, but it’s highly doubtful that they still incite the same level of excitement.

Now, think about the last concert or the last great vacation you went on. You probably feel a smile tugging at your lips even now, right?

Experiences having more of an impact on your happiness than material objects do sounds counterintuitive, as the latter usually outlasts the former, but apparently, that’s exactly why this is so. You can get used to something you see lying around all the time, but a wonderful memory will always have a pull on your heart precisely because it didn’t last long.

Don’t discount the things you can buy with money just yet.

For instance, being able to buy a house for your family after you’ve spent years with no permanent address is a huge relief, as does not worrying about your credit card getting declined when you finally replace a worn-out pair of shoes.

On a less drastic level, people who appreciate art will probably get a real kick out of owning a Cezanne or a Picasso, while those who like Matchbox cars probably take great pride in their expanding collection.

Whether it’s in the form of paper bills and coins, credit cards, or electronic currencies like Bitcoin, money isn’t exactly something we can escape if we want to keep living in the civilized world. So, while buying another house or another car won’t necessarily make you feel happier, having your basic needs met certainly helps. Everything else is just icing on the cake.