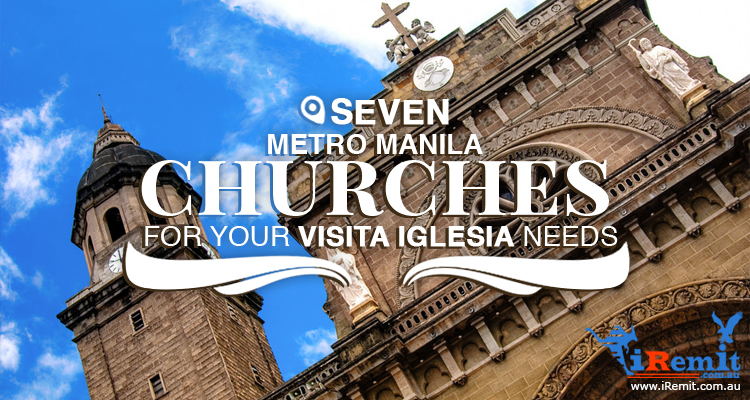 By Serena Estrella in Traveling to the Philippines
April 12, 2017

Stuck in the city for Holy Week? Whether it’s because you’re here in Manila by choice (i.e., didn’t attain that beach body in time) or because everywhere else is overbooked, rest assured that it won’t be so bad.

For one, this is perhaps that one time of year when the bustling metropolis goes quiet, and the streets aren’t congested with traffic. So, it actually makes for a peaceful, potentially meditative atmosphere that’s well-suited to the season.

Now, what’s a nice thing to do during this holiday? Why not try going on a Visita Iglesia? For us practicing Catholics, this ritual is a way for us to commemorate the loving sacrifice that Our Lord made on behalf of humanity, and to reflect on our lives as well. For non-practicing Catholics and for people of different beliefs, the Visita Iglesia is a great way to discover some of the best pre and post-war architecture in seven of Manila’s famed churches: 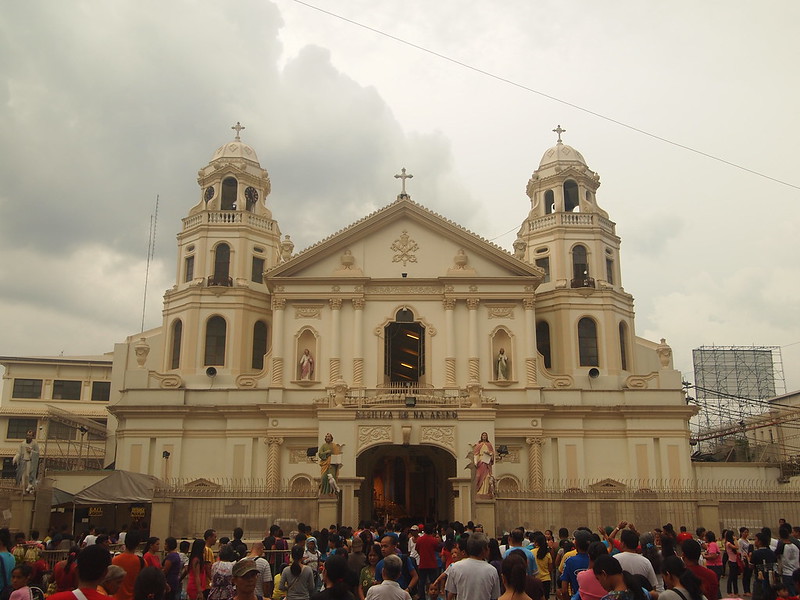 No list of Philippine churches would be complete without Quiapo Church. Located at the heart of Manila, this devotion site is home to the miraculous Black Nazarene, which was originally brought to the country in the 17th century.

While this church underwent several renovations due to centuries of natural calamities and wars, the original Baroque-style facade and transept dome remain intact. The annual Black Nazarene procession also never fails to bring in millions of devotees each year, although that occurs sometime in January, so there probably won’t be as many people at the church during Holy Week.

Given that the first canonized Filipino saint was half-Chinese, it’s only fitting that the church named after him is located in Binondo, which is known to us locals as Chinatown.

Though perhaps the term “cathedral” would be better suited to describe this structure, which was once considered one of the most beautiful churches in the country prior to the British invasion. Today, it stands right smack near the entrance into Binondo, with the 16th-century octagonal belfry hinting at the Chinese heritage of its parishioners (eight being a lucky number for the Chinese) and the colorful paintings on the ceiling inspiring worshippers casting their eyes heavenward. 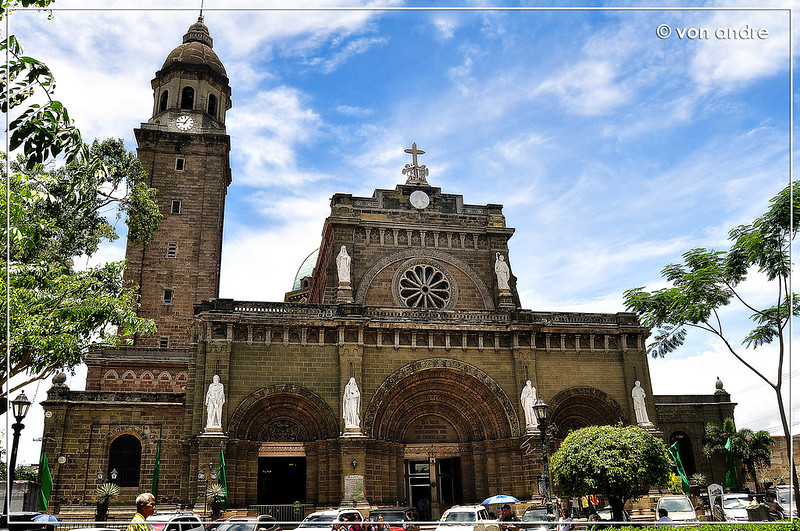 Speaking of cathedrals, the Manila Metropolitan Cathedral-Basilica (as the Manila Cathedral is formally called) is one regal structure that boasts impressive architecture all throughout, from its Neo-Romanesque facade to its cavernous interiors.

Back in 2012, they commenced earthquake retrofitting and and subsidence prevention and so closed the cathedral to the public for two years. Having reopened in 2014, the Manila Cathedral has retained much of its original beauty despite the extensive work done to make it a safer structure.

This church is comparatively new, having been constructed only in 1954, hence its modernist architectural style.

Still, this place of worship has had no trouble attracting a following, with several of the faithful attending services here almost as soon as construction on it was finished.

It’s not the most well-maintained church out there (I’ve seen litter along the pews on my visits), but that hasn’t stopped thousands of Marian devotees flocking here every Wednesday.

Hence, it’s quite fitting that Baclaran Church, as it’s more commonly referred to, was built to accommodate a full-seating capacity of 2,000, though this Modern-Romanesque structure has hosted as many as 11,000 attendees in the past! 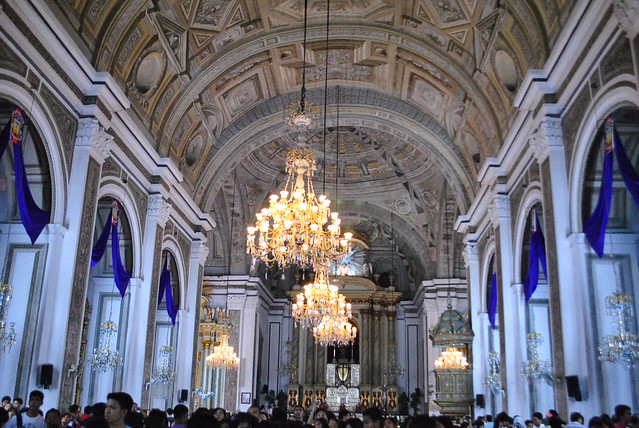 Like the Manila Cathedral, the San Agustin Church has withstood major natural calamities and two World Wars. Though it’s more than four centuries old, this intricately-designed Baroque structure has proven to be quite durable, getting through the 1945 disasters with nothing worse than a damaged roof.

The inside is just as impressive too. When you lay eyes on the trompe l’oeil murals on the ceiling and at the intricately-designed pulpit, you won’t be so surprised to find out that the San Agustin Church is also a UNESCO World Heritage Site. 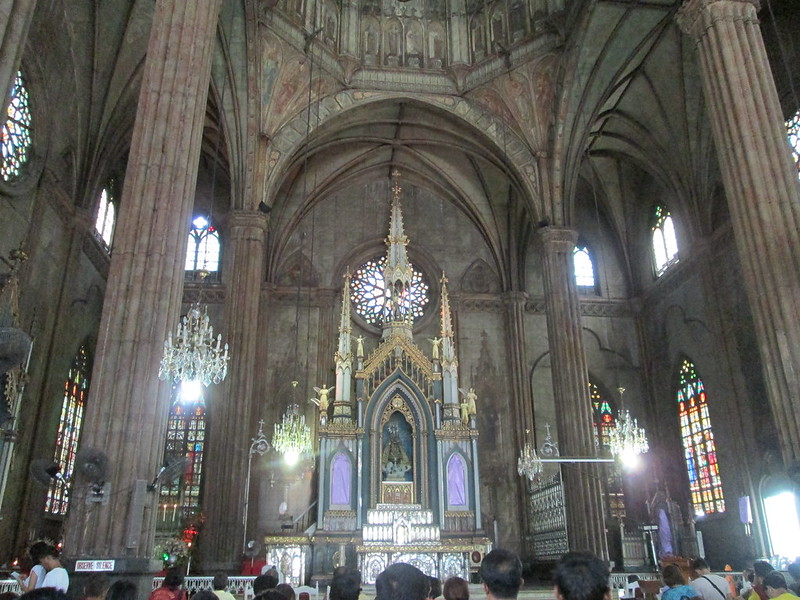 San Sebastian Church’s architecture stands out just as much as those of the other churches on this list, but for completely different reasons.

While the other churches are characterized by Baroque features like domes and arches, San Sebastian Church’s trademark lies in its Gothic twin spires. If that doesn’t sound “metal” enough, the all-steel structure is so far the only one of its kind to be built out of prefabricated steel.

Holy Week is indeed supposed to be a time for quiet reflection, and yes, to rest one’s weary soul as well. While you can actually pray anywhere, doing so in a place of serene solemnity certainly adds to the experience.