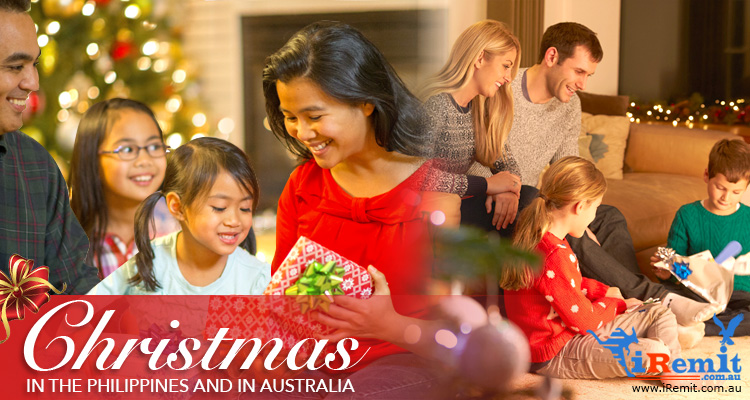 By Serena Estrella in Home and Family
December 19, 2016

7 Distinctions Between a Pinoy and an Aussie Christmas

There are just about as many ways to celebrate Christmas as there are countries on this Earth. Here on the iRemit blog, we’ve written volumes on how the holiday season is celebrated in our beloved Philippines, from regifting to decorating one’s home and everything else in between.

But how different are things Down Under during this time of year? If you’ve ever wondered what a Pinoy OFW’s Christmas is like in Australia, look no further than the examples presented below:

1. Start/End of the Christmas Season.

Pinoy Version: I have yet to learn of a country that celebrates Christmas earlier than we do in the Philippines. I don’t think even Santa’s elves in the North Pole start decking the halls in September, but that’s precisely when Jose Mari Chan’s “Christmas in our Hearts” starts clogging the airwaves and spawning multiple bouts of last song syndrome (Sing it with me, kabayan, “Whenever I see boys and girls….”)

When you anticipate an event for that long, it’s only natural that you’d want to make it last. Hence, the official end of the Philippine holiday season happens weeks after Christmas Day itself, specifically January 6 (The Feast of the Epiphany).

Aussie Version: Here’s where it gets tricky. Technically, Australia celebrates Christmas twice. That’s what you get when the sort of weather reminiscent of “Winter Wonderland” rolls around mid-year, I suppose.

Christmas still comes once a year, of course, officially anyways, though there is a growing number of people who also celebrate Christmas in July for kicks.

Traditionally speaking, the Australian Christmas season begins in November and ends on January 6 (Twelfth Night), when there is one big party held to end the festivities.

Pinoy Version: No, we don’t get snow during the Christmas season in the Philippines, but it does get mercifully cooler, at least when compared to our scorching hot summers. Global warming notwithstanding, December’s usually when most Filipinos save money on electricity since they can sleep at night without turning on the air conditioner.

Aussie Version: Thanks to this country-continent’s geographic position, the Christmas season heralds the beginning of the summer holidays as well. The temperatures are so high towards the end of the year that massive bushfires are common during the holidays. Fortunately, there are also a lot of volunteer Aussie firefighters on hand to put them out.

The upside of this topsy-turvy holiday weather is that Aussies are perhaps the only Westerners who can frolic on the beach in nothing but their bathing suits on Christmas Day. And ironic as it sounds, they still have a jolly good time singing “White Christmas” while they’re at it, which brings us to…

Pinoy Version: Unless you live under a rock (or in an ultra-secluded, gated community housing the country’s 1%), Christmas isn’t Christmas without the sound of children singing various carols outside your door every night.

Some carolers are actually quite good, and they even bring along forks and tin cans as makeshift instruments to accompany their musical stylings. Should you find yourself listening to unbearably off-key renditions, a few coins scattered among the aspiring singers ought to have them moving on to the next house and leaving you in peace.

Aussie Version: Caroling is so popular in Australia that they even have a national tradition called “Carols by Candlelight.” This is where Aussie musicians (think The Wiggles, Anthony Warlow, and Niki Webster) from every major state capital sing traditional Christmas carols. Sometimes, these concerts are even broadcast on television nationwide.

Pinoy Version: If there’s one meal that many Filipinos look forward to throughout the year, it’s the Noche Buena. Literally “good night” in Spanish, this holiday feast is typically consumed after the midnight Mass on Christmas Eve, and it’s perhaps the primary reason why so many of us get fat before the year ends.

I mean, come on, can you really resist the sight of a gleaming, juicy ham without reaching for a slice or ten?

Yep, didn’t think so either.

Aussie Version: True to the Australian love affair with the great outdoors, an Aussie Christmas Family Dinner is actually an al fresco Family Lunch. Because of the summer heat, members of one’s extended family often gather at one long table outside to feast on roasted turkey, flaming Christmas pudding, and buckets of ice-cold beer.

Prawns are to Oz what sweet ham is to the Philippines. In the week before Christmas, Aussies spend ten times more on prawns than they do on any other occasion, perhaps because a cold prawn cocktail is especially refreshing on a hot summer’s day, eh?

Pinoy Version: Despite the fact that most Filipino homes don’t have chimneys (we don’t exactly need bonfires to warm ourselves up), that hasn’t stopped us from passing on the myth (?) of Santa Claus down to our kids.

So, yes, the typical Filipino child sees Santa Claus the same way as his or her Western counterparts do: a chubby, white-bearded, pink-cheeked old man in a red suit trimmed with fur. Don’t forget the flying sleigh pulled by twelve reindeer, though given how expensive parking is in the city, he probably leaves it floating above the roofs of the houses he visits.

Aussie Version: Down Under, Santa gets a laid-back makeover. Instead of the red, fur-trimmed suit, Aussie Santa wears shorts during his rounds and even uses six white kangaroos to pull his sleigh in lieu of Rudolph and his ilk. Crikey!

Pinoy Version: Apart from stuffing one’s self silly during the Noche Buena, Pinoy families attend Christmas Mass together and then open the presents under the tree at midnight. The day after is usually spent in drowsy contentment, with most people sleeping off the belly-busting feast from the night before.

Aussie Version: The two greatest indulgences of very Australian family every Christmas are beer and cricket. Sure, they also spend Christmas Day sprawled in front of the TV, but only after they’ve played a few rounds of Oz’s national sport and drained the beer fridge dry (not necessarily in that order).

Pinoy Version: Pine trees aren’t indigenous to the Philippines, but plastic Christmas trees sure are, judging from how one of these things can be found in just about every office, home, and classroom.

Handmade lanterns called parols and a diorama of the Nativity scene (called the “Belen” in the native tongue), on the other hand, are distinctly Filipino decorations.

Aussie Version: There are Christmas trees in Australia too, but they eschew the traditional holly and mistletoe here in favor of a local plant known as the Christmas Bush. With its green leaves and creamy blossoms that turn red during Christmas week, it can definitely give the traditional standbys a run for their money.

Christmas in Australia may appear to be rather different from Christmas in the Philippines, but those missing home during this holiday can take comfort in the fact that the core ingredients of family and community are very much present in both celebrations.