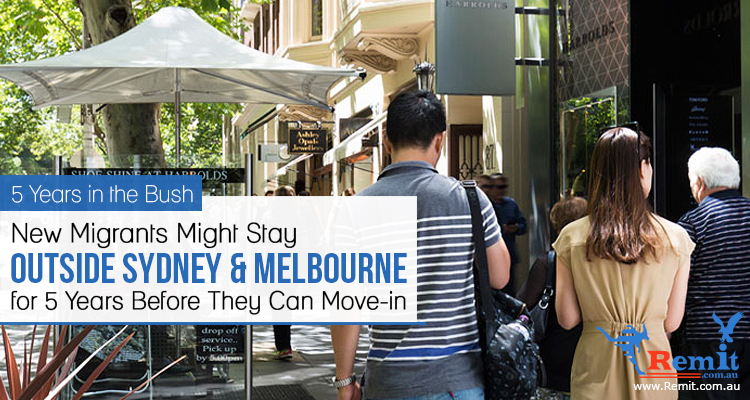 5 Years in the Bush: New Migrants Might Stay Outside Sydney and Melbourne for 5 Years Before They Can Move-in

As aspiring Filipino migrants flock to Australia for new opportunities, they may find working in Sydney or Melbourne now harder than ever. It’s in the talks now. New migrants might need to stay outside Australia’s largest metropolis before they can move-in.

The talks limiting visas for outside Sydney and Melbourne have been circulating even before the dramatic step-down of the Turnbull government. In fact, there’s an ongoing suggestion by the Home Affairs Department to set an 18-month period before one can transfer to these 2 metropolises.

But the new Prime minister, Scott Morrison, adds their own set of visas to extend the period for up to 5 years!

Why is This a Problem?

This supposedly solves the congestion created by the influx of migrants. Almost 90% of migrants set foot in Sydney and Melbourne resulting in overpopulation by its land area. While other regions still lack the manpower to prosper more.

Although Australia has the Skilled Regional (887) and the Regional Sponsored Migration Scheme (187), this is not utilized by most migrants.

The overcrowding caused infrastructure problems in these megacities. The government can’t keep up. That would’ve not been the case if the population was evenly distributed.

5 Years in the Bush

As a result, the cabinet is deliberating the 5-year lock-in period into outer regions. These regions do not necessarily mean you’ll be living in forests or lakes (Although that would be nice also).

You would have to be located in smaller cities like Canberra, Darwin, Adelaide or Hobart. The stationed family would probably stay far longer than the 5 years because of the established relationships (like work and education) in those areas.

Migration has been at its all-time low. What do you think of the upcoming change? Will this benefit those aspiring expats and the economy more? Or will this trickle down to future manpower problems for businesses? Let us know your thoughts about this.