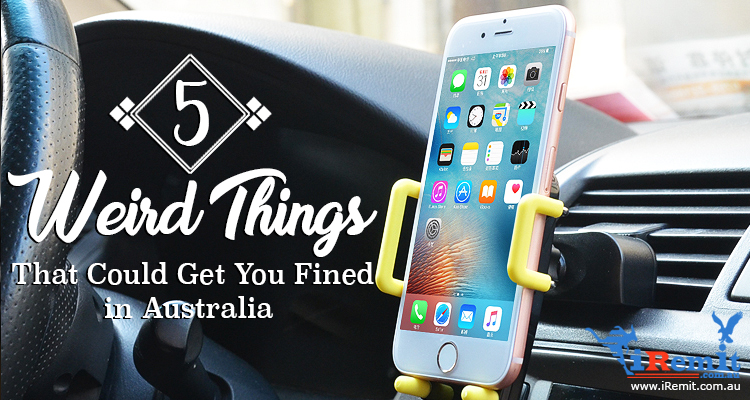 By Serena Estrella in Life in Australia
April 6, 2017

5 Weird Things That Could Get You Fined in Australia

Singapore is said to be a FINE city, not because the architecture is amazing and the streets are so clean, but because the most ridiculous things can get you fined. Threw up on a bungee jump ride? That’ll be SGD200, please. Chewing gum on the road? Ka-ching! Accidentally spilled ice cream on the pavement? Hold it- well, you get the picture.

While Australia is certainly a lot more laid-back than Singapore, it also has some pretty interesting laws that could result in you having to pay a steep fine (yikes) for what seems to be the most innocent of deeds. So, read on and discover five of the weirdest things that you can avoid doing to escape an untimely deduction from your bank account:

I know, right, WTF? Well, Queensland, New South Wales, and Victoria have laws that consider the public usage of swear words to be a legal offense. Victoria, in particular, is supposedly considering passing a law enabling police officers to fine pottymouths up to AUD240 if they let loose with their mouths in public.

So, what qualifies as a public place? Well, just about everywhere, it seems, from highways, parks, playgrounds (fair enough, I mean, who would want their kids to pick up some new swear words?), churches (but OMG is considered blasphemy, is it not?), zoos, parks, gardens (uh-oh, bite your tongue if you get bitten by something), and other public places of entertainment (too bad for die-hard sports fans).

To be fair, swear words are so commonplace these days that most people don’t flinch at the f-word as much. However, since the decision to fine the offender lies with Victoria’s police officers, you may want to hold off on dropping the f-bomb if you see one who looks like he’s the conservative type coming your way.

2. Sticking a GPS system or mobile phone holder on your dashboard.

Here in the Philippines, taxi drivers hang car fresheners on the rearview mirror and those who work for Uber have a handy GPS system nestled on their dashboards. We see these things all the time, so we don’t think anything of it.

The Aussies, however, don’t exactly agree. There’s nothing wrong with using Waze or so while driving, but the authorities would prefer it if you kept your dashboard and your rearview mirror free of any debris (yep, including those fluffy stuffed toys that some people like to hang around their cars) since they get in the way of your vision.

And if you insist that you can still see perfectly fine with those things in place? You better cough up

3. Not declaring any kind of food that you brought with you into the country.

Yep, even airplane food is not exempt from declaration. Remember those little forms that flight attendants pass around just before the plane is about to land? Yeah, you may want to declare just about every kind of organic matter that you have with you (hello, dried mangoes for Tita Baby and her Aussie hubby) on those, including that apple that came with your onboard meal if you plan on eating it later at the hotel.

Australia has very strict customs rules in place since their biodiversity tends to be threatened by pests like rabbits and cane toads (mistakenly brought into the country many decades ago). Oh, and

declaring your goods won’t exempt them from getting confiscated if the authorities deem it right to do so, but at least, you won’t get fined for attempting to bring them in.

Always look on the bright side, I guess.

4. Waving out your car window at your neighbor (or anyone else for that matter).

Again, this sort of behavior is pretty commonplace in a lot of areas around the world. Heck, here in the Philippines, some drivers flip the bird at others from their car windows and no one raises a stink.

having any limb protruding from a vehicle window (even if it’s just an elbow resting against an open window) merits an AUD298 fine. Welp. Better keep those car windows up then.

You may think there’s nothing wrong with walking along the street eating a nice bag of crispy chips. Everyone does it, right? Wrong. If you happened to walk into a designated smoking zone (easy thing to do if you’re too engrossed in your chips to notice) while you are still eating, that too is a fineable offense.