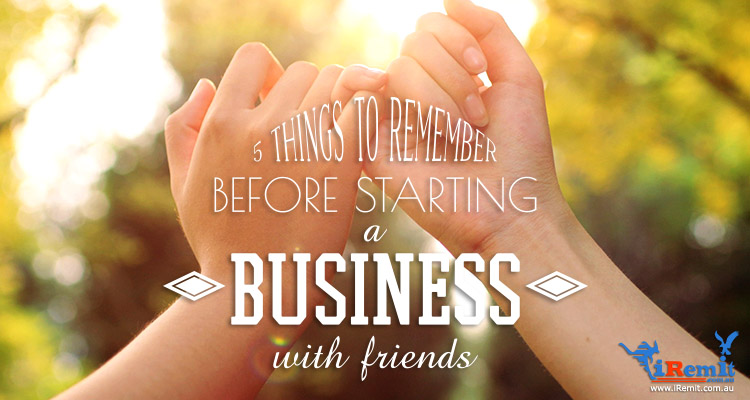 By Serena Estrella in Business and Career
June 29, 2017

5 Things to Remember Before Starting a Business With Friends

Ever seen the 2010 film “The Social Network?” It’s basically about two college friends who founded a business together. Their names were Eduardo Saverin and Mark Zuckerberg, and the company they accidentally built was called (come on, I don’t really have to say it, do I?) Facebook.

It’s now common knowledge that the social media platform is worth billions now, but what many people didn’t know until the movie came out is that Zuckerberg and Saverin fell out just as the company was embarking on its meteoric rise, with Saverin even suing his former friend and business partner at one point.

Start-ups might be popular among millennials these days, with many of the founders having met initially as friends, but the demise of the Facebook co-founders’ friendship remains a cautionary tale that makes people think twice before going along with a buddy’s “brilliant business idea.” The road to building a successful business can be made easier if you’re treading it alongside people you love and trust, but it can also put a strain on your relationships, which could be irreversible, if you don’t go into it with both eyes open.

So, what sorts of things should you iron out with your friends before you all set out to be business partners?

1. Roles need to be established early on.

Assuming that you guys have been friends for years, by now, you should all have a grasp of each other’s strengths and weaknesses. Have the tough conversations at the beginning, and decide on who gets what position in the company VERY CAREFULLY. Once you’ve done so, be sure to stay in your lane and out of your partners’ (unless the need to do otherwise should arise, and even then, do so with caution).

Other things you need to work out when you start a business with friends are ownership and profit shares as well as each other’s levels of commitment. Be sure to consider the possibility of one or some of you possibly leaving the business to pursue a different path somewhere down the line, and then discuss what adjustments (i.e., in ownership and profit dividends) need to be made should this happen.

However, do allow for occasional cross-training. Having a working knowledge of each other’s roles and responsibilities will help brace your business for small setbacks like one of your partners having to deal with a short-term illness.

2. A business is not a democracy.

Guess what? Fairness shouldn’t be a priority for early-stage founders.

Unless you want your business to never get any real traction, someone has to take on the role of the benevolent dictator and be in charge of quick, everyday decisions needed to keep the ball moving forward. If you keep waiting for everyone’s OK on every single decision, you guys will get nowhere.

3. Frequent, effective communication is a must.

The importance of sincere, authentic, and frequent communication cannot be understated in business, let alone in friendships.

I’m not just talking about informal catch-up sessions either. For many friends who build businesses together, tension can arise when people hesitate to confront partners about certain concerns. It might help you avoid conflict for now, but it’ll be disastrous for both your company and for your friendship in the long term.

Instead of tiptoeing around things, set up a disciplined communication schedule. Examples of this are weekly strategy sessions, monthly briefings, and of course, quick daily updates. Be sure to talk about what’s going well and what isn’t going so well, and if you can, you and your group should also schedule quarterly retreats to discuss goals, points of tension, points of gratitude, “yellow flags” outside work (such as someone’s spouse contemplating migration), and each other’s personal goals and aspirations.

4. You’ll need to bring new people in at some point.

Most friends share a lot in common: experiences, personalities, values, and perspectives. And that’s great because it’ll help you communicate more meaningfully.

The downside to that, on the other hand, is that you can also share a blind spot. This is how new people can be beneficial to your business. If your early hires can bring something new to your current pool of skills and viewpoints, it could really give your business a much-needed fresh shot of ideas.

Many start-up founders opt to live together as they try to get their business off the ground. That set-up can be fun, and it can ensure that all of you are fully immersed in the process, but do so with an exit strategy in mind (i.e., plan on living elsewhere after six months or so).

Bear in mind that you’ll all probably be seeing each other 16 hours a day anyway, so don’t begrudge anyone their much-needed space, especially after the initial groundwork has been completed and it’s no longer necessary for all you to be under one roof.

They say that money tends to muck up personal relationships, especially those involving blood relatives and close friends. But while there are plenty of horror stories of great businesses collapsing along with their founders’ lifelong friendships, there are also quite a few notable exceptions.

If you and your friends manage to keep your wits about you as you build an empire together, you could very well end up with an even stronger fellowship AND a profitable enterprise, and that’s well worth the extra effort it takes to get there, no?