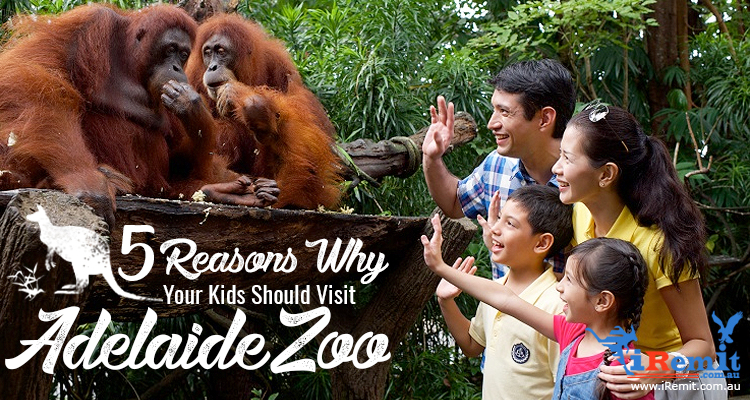 By Serena Estrella in Life in Australia
April 5, 2017

5 Reasons Why Your Kids Should Visit the Adelaide Zoo

Apparently, travel is one of the best gifts you can give your children. Apart from the priceless memories and the bonding experiences that your kids will get from the experience, the process also imbues them with quite a few valuable life skills and learnings.

Since Australia is a family-friendly country and is just about an eight-hour flight away from Manila, it’s an ideal destination for a child’s first trip abroad. This wonderful country-continent’s breathtaking natural beauty, kid-friendly cuisine (meat pies! Yay!), and endless assortment of the most fascinating creatures to ever walk the earth ought to stimulate any kid’s imagination.

If the last part of the previous sentence gets your child the most excited about a trip to the famed Down Under, then it would be a grievous crime to not bring him or her to the Adelaide Zoo. Australia isn’t called “Nature’s Playground” by many travelers for nothing, and the said zoo ought to make an impact on your kid in any or all of the following ways:

1. The Adelaide Zoo features an exhibit of animals that your child is unlikely to see elsewhere.

The zoo is home to a staggering 3,000 animals that belong to 250 species of both native and exotic birds, reptiles, fish, and mammals, and three hours is barely enough time to see them all.

As a family, you may have expected to see animals like the red kangaroo or the Victorian koala in Australia, but the Adelaide Zoo houses species from all around the globe. Eight whole hectares of well-tended botanic surroundings have been devoted to such delightful beings like the Mainland Tammar Wallaby, the Malayan Tapir, and the Tasmanian Devil (and no, it doesn’t much resemble Taz from Looney Toons), among others.

And you will get to see all of them up close.

2. Your child will get to interact more closely with the animals here than with those in almost any other zoo.

If your kid (or even you) has (have) ever wondered what it’s like to have a giraffe eating out of your hand, play at being a zookeeper for a day, or even spend the night in a tent with the zoo’s inhabitants making their unique noises in the background, you can do all of that (and then some) here.

With an impressively wide range of animal experiences on offer here at Adelaide Zoo, your child (or you) will literally get within a whisker of many a favorite creature.

3. Kids of all ages can play in an actual Nature’s Playground.

In an age where far too many children are glued to their iPads, the Adelaide Zoo is sure to be a godsend for parents who want to introduce their kids to the joys of playing outside (and no, I don’t mean playing with an iPad OUTSIDE).

Nature’s Playground is a specially-constructed space where children of all shapes and sizes can build a fort out of sticks, branches, and leaves, splash around in a series of water jets, scoop up some tadpoles in the natural creek bed, and just really be a kid playing around in the Great Outdoors. Doting parents, of course, can join in the fun or catch their breath in a well-appointed new parents’ room.

This facility’s playground equipment also has features that allow disabled kids to make their way around the area, ensuring that no kid indeed gets left behind when it comes to having fun in this part of the world.

4. The way the zoo is set up will make you appreciate the animals and conservation efforts that benefit them more.

Each exhibit is designed to give any visitor more information on each animal on display, and in some cases, how many of them are left on this world. Many of the zoo’s visitors have also noted the staff as not only friendly and helpful, but genuinely concerned and protective of their animal charges.

Your children will certainly learn a great deal about kindness towards all the living things that inhabit this world, and such lessons could only be good for them and for the future generations of Earth’s wildlife.

5. To commemorate the trip, Adelaide Zoo’s gift shop has loads of animal-themed souvenirs that your kid will no doubt treasure.

From t-shirts with a panda’s face on it (the zoo is known for its fantastic panda exhibit) to fluffy flamingo plushies, visitors will be spoiled for choice in picking out their respective mementos.

Most of the items sold here were picked out for being environmentally friendly, and if your visit to the zoo opened your eyes to the need for animal conservation, you can make a donation to the animal of your choice via their themed gift cards.