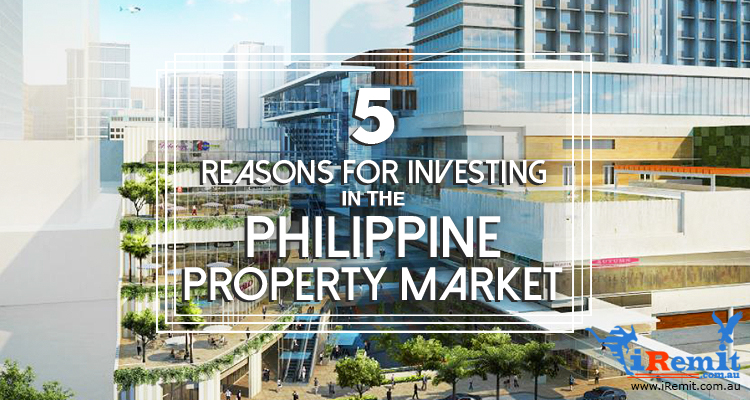 5 Reasons for Investing in the Philippine Property Market

From being the Sick Man of Asia, the Philippines has clearly become the world’s investment darling. Former President Benigno Aquino III’s regime may have been subject to heavy criticism, but it’s virtually impossible to deny that the Philippine economy has gone from strength to strength in the past six years.

The property market has particularly benefited from the country’s robust economy. In Manila alone, the skyline has changed rapidly over the years to accommodate increasingly towering condominiums and buildings. The trend for building malls that span an entire block has also led to increased property values all over the metro.

Still, many expats and OFW’s hesitate when it comes to investing in Philippine real estate. Some of them do so because they feel that the many developments in the capital city are a sign of a saturated market, or that the local property market is entering a bubble.

Now, while we certainly can’t give you any advice on what properties to buy, we can tell you that you shouldn’t be so quick to dismiss the idea of investing in the Philippine property market. Here’s why:

1. Demand has not slowed down.

The premise is simple: the Philippine population continues to grow (some say at a rather alarming rate) while the amount of livable land remains the same. Thus, you have a recipe for fairly steady demand where property is concerned.

Predictably, this is most evident in the capital city’s central business districts (CBD’s), such as in Makati’s Bonifacio Global City and Rockwell Center, where a 3-bedroom unit can cost as much as Php148,000 (AUD4,216) or Php158,000 (AUD4,500) per square meter, on average, respectively. If you think that’s excessive, you’ll find that the millions who availed of the Php411 billion (AUD11.8 billion) worth of real estate loans in the past year would disagree.

Furthermore, heavy traffic (that one aspect of Manila life that remains to be the bane of commuters and non-commuters alike) ensures that there will never be a shortage of condo dwellers willing to pay rent every month to make their daily commute to school or to work somewhat easier.

2. While the purchase price for Manila properties has certainly gone up, prices in other areas remain competitive.

If you are an OFW or Aussie expat who is put off by the prices of Manila’s luxury properties (sometimes compared to the excessive pricing in nearby Singapore), remember that the Philippines is comprised of 7,106 other islands where you can find a profitable niche if you look hard enough.

The city of Cagayan de Oro in Mindanao, for instance, is a promising and currently underserved market. With a population of 20 million, along with the presence of a seaport, several emerging food-processing plants, and a growing reputation as the country’s whitewater rafting capital among tourists, the first condo development’s units in this area reportedly sold like hotcakes last year.

Makati isn’t the only area of the capital city where land prices are on the rise. Ortigas too is fast catching up, with land values in its CBD increasing all the way up to Php164,886 (AUD4,698) per square meter in the second quarter of 2015 alone. Surprisingly, despite the rise of property prices all over, the real estate market has yet to recover from the effects of the 1997 Asian Financial Crisis, so residential property rates have nowhere to go but up.

And as many highways and bridges are being built to connect the country’s many cities and provinces, one can expect an upsurge in land values outside of Manila as well.

The country’s major commercial banks often compete as to who could give the lowest interest rates for housing loans, and annual fixed loans for customers who want to borrow for residential purchases currently range from a relatively modest 5.3 to 7.8%.

Availing of a mortgage, on the other hand, would mean fixed interest rates ranging between 7-10% over a period of at least five years.

5. There is a decline in vacancy rates, but residential rent rates are ever increasing.

Thanks to the strong demand for housing (see the first item on this list) and how long it takes to complete a new building project or complex, vacancy rates have significantly gone down in the country’s major CBD’s. Since residential vacancy rates have decreased across the board in Makati’s CBD alone, it’s probably safe to assume that even the luxury segment of the real estate market isn’t as unattainable as we would think.

And given the time-honored law of supply and demand, it’s only natural that residential rents should also increase. As of 2015, it’s been estimated that renting a residential property or condo unit in Makati’s CBD would cost no less than Php590 (AUD17) per square meter per month.