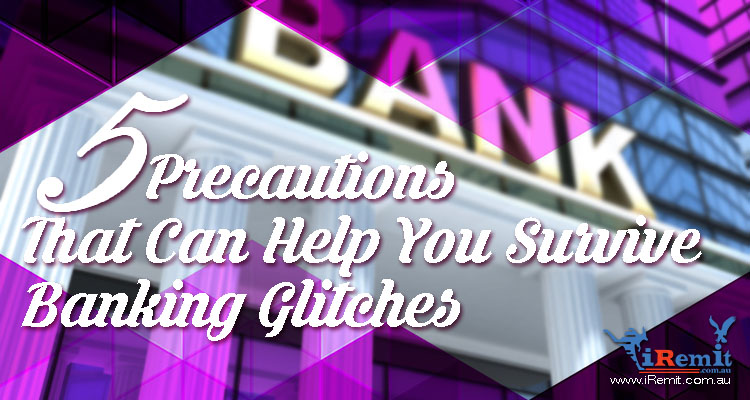 5 Precautions That Can Help You Survive Banking Glitches

In June, several of the Bank of the Philippine Islands’ (BPI) clients took to social media to air out their grievances over a system-wide glitch that led to several accounts reflecting erroneous balances. Some depositors were puzzled by deficits in heretofore-healthy bank accounts while quite a few marveled at one or two (or even three!) additional commas dotting the latest entry on their passbooks.

This then led to mass panicking and a frenzied emptying of savings accounts, causing BPI to freeze everything until they could sort the whole mess out.

Needless to say, so many people were hassled. I mean, imagine being unable to withdraw funds for your mother’s urgent hospital treatment or even for your lunch because your account was frozen. We haven’t even talked about how it was practically impossible to verify if a crucial remittance reached its intended destination during this time.

Shortly after BPI was able to right things, Banco de Oro (BDO), another major banking institution in the Philippines, warned its customers about an ATM-skimming fraud. And even more recently, Security Bank also had a bit of a hiccup, leading to a delay in the posting of bank transactions.

While we would all be well within our rights as customers to weep, wail, and gnash our teeth (via our Facebook accounts anyway) at our respective banks, a more proactive step would be to take certain precautions so you won’t be left defenseless the next time stuff like this goes down:

I try to update my passbook whenever anything gets debited or credited (i.e., whenever I withdraw or deposit/have something deposited) so that I can label what each disbursement was for and where every insertion comes from. This aids me greatly in keeping track of my finances even if my bank’s online facilities were rendered inaccessible for an extended amount of time.

If that’s not possible for you, try to aim for weekly passbook updates. If you don’t have a passbook (i.e., if your primary account at the bank is a payroll account), perhaps you can ask the bank for regular statements. We may be living in the digital age, but sometimes, a written record can help make your case, especially if your bank’s services happen to be offline.

2. Keep records of your deposits, withdrawals, and remittances until these have cleared.

Most of us chuck our deposit receipts or withdrawal forms with nary a second glance.

Normally, that’s okay, but until our country’s major banks get a hold of themselves, best hang on to them until the transactions in question have been duly reflected in your records. Hopefully, you won’t need them to settle a dispute later on, but who knows? Better safe than sorry.

3. Don’t put all your money in one bank.

It’s a tired old cliché, but there’s a reason why you don’t place all your eggs in one basket.

Apart from the fact that you should take advantage of all the promos and packages being offered by several different banks (thank the gods of market competition), having an account with at least one other bank gives you peace of mind in case something goes wrong with your primary bank.

If you’re worried about having to allot some of your hard-earned cash to open another account, do know that some banks like EastWest, for instance, require as little as PHP100 for their basic savings account’s maintaining balance. So, shop around and don’t be afraid to ask about your options.

Debit cards are a great alternative to cash, sure, but they’re useless if your bank is forced to freeze all accounts like in BPI’s case.

I would recommend reserving about a week’s worth of expenses in cash and then stashing it away in a safe place at home, like in a safe or lockbox. This way, in case your primary AND back-up bank somehow muck up things at the same time, you won’t have to worry about having enough cash for your daily needs.

Just don’t forget to replenish your reserves when all is well with your bank/s again. Refrain from dipping into them when you’re tempted to get that jacket at the month-end sale too.

I get it. It’s highly disconcerting to see a lifetime’s worth of savings seemingly decimated overnight by a clerical error or worse, a security breach. No one wants that.

Still, this isn’t an excuse to fly off the handle and rage at your bank’s frontliners. You have every right to be upset and angry, but not to verbally abuse the tellers and customer service representatives who are all just doing their jobs and are probably just as helpless and blameless as you are in this whole fiasco. It might feel good to lord it over them now, but don’t forget that you’ll have to face them time and again long after this whole mess is cleaned up.

Besides, you’re covered up to PHP500,000 by the Philippine Deposit Insurance Corporation (PDIC) in case the sh*t really hits the fan, so keep your wits about you.

In a perfect world, petty inconveniences like banking glitches would be non-existent. However, that’s not the world we live in, so let’s all do what we can to come up with the next best thing: a back-up plan for when things aren’t so perfect.