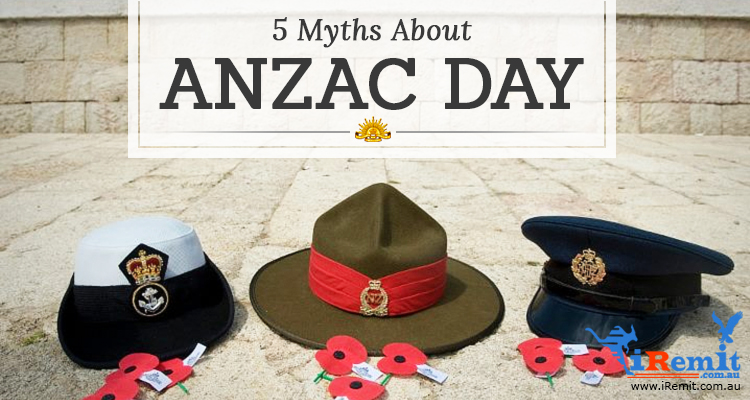 The British have Remembrance Day. We Filipinos have what we call “Araw ng Kagitingan” (“Day of Valor” in English). And today, Australia and New Zealand commemorate ANZAC Day.

As you may very well know, ANZAC is an acronym for “Australia and New Zealand Army Corps.” Every 25th of April, both nations memorialize the first military mission that this particular group embarked on: the Gallipoli Campaign, which took place in Turkey. Though the mission was very much a failure, the deaths of thousands of young Aussies and Kiwi’s on that day have become firmly embedded in the national consciousness and ANZAC Day continues to honor the brave sacrifices that they made throughout the First and Second World Wars.

However, this hasn’t stopped quite a handful of myths about the said event going around. So, in honor of today’s holiday, this article will clear up some of the most widespread misconceptions about ANZAC Day:

1. “ANZAC Day commemorates all those who fought to defend the country (Australia).”

When you think about it, no Australian serviceman has actually fought in a war to defend Australia. (Okay, so there was that brief tussle with Japan in World War II, but the Japanese forces weren’t exactly a genuine threat either.) The country-continent’s armed forces have mostly been deployed in British Colonial Wars and peacekeeping operations, so there has never been a real call to arms to defend Australia’s sovereignty (or its citizens’ freedoms).

Rather, ANZAC Day commemorates the valor of both nations’ armed forces, plain and simple.

2. “The ANZAC’s were natural, elite soldiers.”

There’s this romantic notion that the ANZAC’s were fine physical specimens: tall, strapping, and in much better shape than most. They also stood out alongside their British counterparts, as evidenced by many eyewitness accounts on that day corroborating the same.

However, the ANZAC’s were far from being elite soldiers, at least not at the beginning. They were very inexperienced amateurs upon landing and they had to learn about war in a hard school, according to Mr. Ekins, the author of “Gallipoli: A Ridge Too Far.”

3. “New Zealanders landed at dawn on 25 April, and that’s why we have the Dawn Ceremony on ANZAC Day.”

The New Zealanders started coming in after 9 AM, and most of them landed past midday. The Third Australian Brigade did land just before dawn, on the other hand.

The Dawn Ceremony didn’t even become an official part of the ANZAC Day festivities until 1927, when it was first held in Australia. New Zealand didn’t even follow suit until about twelve years later.

4. “If ANZAC Day falls on a weekend, the following Monday becomes an official holiday.”

Nope, ANZAC Day has never been “Mondayized,” as we tend to do with Filipino holidays. April 25 is still strictly observed as the official holiday and legislation was even passed in 1949 to that effect.

5. “Poppy Day is another name for ANZAC Day.”

Red poppy buttonholes might be emblematic of remembrance day celebrations the world over (they’re given in exchange for donations to the welfare fund for New Zealand’s veterans and their dependents, for instance), but Poppy Day is a whole different occasion from ANZAC Day. It’s celebrated on the Friday before ANZAC Day, and red poppies are worn on the left lapel from then on until the latter holiday.

These new learnings may come as a surprise to some of us, but these shouldn’t detract from the solemnity of the holiday. Bravery comes in many guises, and laying down one’s life for one’s country is perhaps the ultimate sacrifice regardless of whether the battle is won or not.