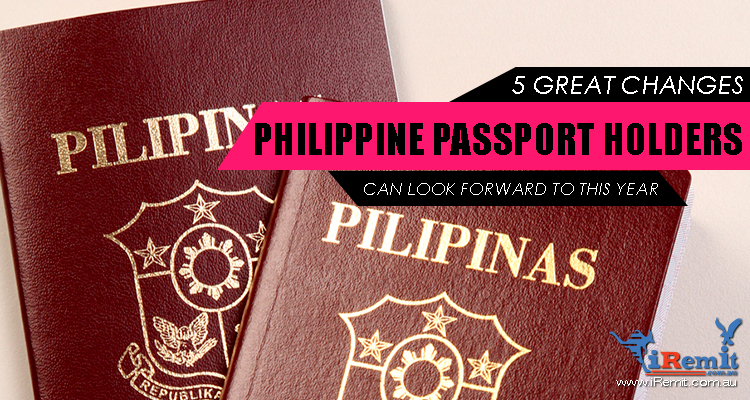 Your passport is a great indicator of how powerful and/or rich your country is. And for the longest time, we Philippine passport-holders felt like we may as well be from Afghanistan, considering the amount of paperwork (and $$$$) we need to present to get visa’s to typical bucket-list countries in Europe and North America. Heck, I read somewhere that your bank account balance has to have at least six figures for you to get a Japanese visa, and the Land of the Rising Sun’s all but four hours away from our shores by plane.

However, 2017’s shaping up to be a great year for the Philippine passport, what with certain changes that have been or are currently being made to its overall look and access:

As of this writing, the Philippines has visa-free entry to sixty-one (61) countries, thanks to the strengthening of international ties and the lobbying of our own diplomats and representatives. This gives our passport a global ranking of 64. For reference, the German passport is ranked at no. 1, giving its holders visa-free entry to a total of 151 countries.

This pretty much means that Filipinos now have more options for their next adventure abroad. And speaking of which…

Fancy visiting the land of “Meteor Garden?” (Yes, I realize my age is showing.) If you book a trip to Taipei from September of this year onwards, you may be able to visit without applying for a visa.

In a move to encourage more tourists to visit their country, the Taiwanese government is planning to grant Filipino tourists a visa-free entry period of 30 days. It was initially supposed to be implemented last month, but has been moved to later this year.

All the more time to save up and prepare, eh?

The old Philippine passport looked admittedly dull, dreary, and plain, and worse still, it used to be the only Southeast Asian passport that wasn’t machine-readable.

Thankfully, this was remedied two years ago when the new design was unveiled. Not only was the green cover swapped for a maroon one, but the pages also featured beautiful artwork of patriotic symbols like the monkey-eating eagle, the preamble of the National Constitution, and the lyrics of the Philippine national anthem. The visa pages also feature uniquely Filipino landmarks like the Ifugao Rice Terraces, the Mayon Volcano, and even the Manila skyline.

Oh, and it’s also got security features< like an embedded microchip, special inks that only show up under infrared lighting and provide a ridged feel, and perforated passport numbering, all to deter tampering and counterfeiting.

Korean culture has certainly taken the Philippines by storm and anyone who’s a fan of Hallyu stars, Korean skincare, and many other wonderful imports from the Land of the Morning Calm will be thrilled to learn that its visa requirements for Filipinos have been relaxed further.

For instance, the South Korean envoy announced that his government will be issuing e-visas allowing travelers a five-day visa-free stay for visiting Jeju Island via Incheon or Gimhae Airport. This will soon be available through select tour agencies, so you may want to hit up the upcoming travel fairs this year.

5. Visa on Arrival Status for Mauritius

In the unlikely event that you get sick of visiting the Philippines’ most beautiful beaches, you can fly on over to this tropical paradise in East Africa.

A visa on arrival status means that Philippine passport-holders will be granted one as soon as they land, making it all the more easier to enjoy the powdery beaches and lush rainforests that this island has to offer.

Okay, so a visa-free entry to either Japan or to the United Kingdom (!) still feels like eons away, but with our passport’s significantly-improved prospects this year, it seems like we are heading in the right direction at least.

Perhaps the next century’s version of the modern-day millennial can jet around visa-free, no? (Hey, dreaming’s for free even if plane tickets and visa fees aren’t.)