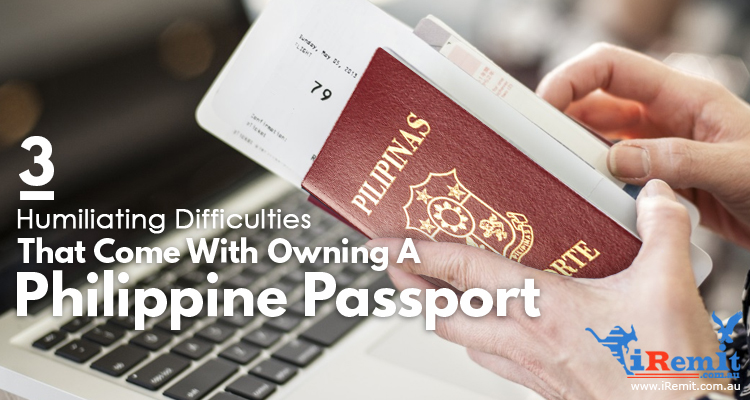 3 Humiliating Difficulties That Come With Owning A Philippine Passport

Traveling is wonderful, freeing, and relaxing……unless you have a Philippine passport.

You see, what those beautifully-filtered Instagrams of pristine beaches, medieval towns, and fancy-schmancy airports don’t show you is the mind-boggling amount of paperwork it probably took to get there. AirBnB’s and seat sales might have helped make traveling cheaper and more accessible, but there remains the fact that majority of the world’s most popular destinations require its Filipino visitors to apply for a visa, Australia and New Zealand included.

Long-story short, while the Philippine passport is due for a much-needed facelift this year, our little maroon booklet remains to be one of the weakest in the world, as proven by the following difficulties that its holders continue to encounter:

There’s a reason why travel sales occur every January and July in this country. On average, it takes about six months to prepare for a trip to, say, the United States or Great Britain, so you could certainly use the leeway. Saving up enough money to cover your travel expenses is already a given, but you need to allot a couple of months at least to get all your papers in order.

It’s bad enough that you can’t travel if your passport is less than six months from the expiry date (making the actual expiry date useless, in my opinion), and our Department of Foreign Affairs is notorious for taking forever to renew travel documents. If you’re planning to visit several countries in Europe, preparations can be downright stressful because you’ll need two visas at least: a UK visa and a Schengen visa. Both will require you to present several documents attesting to your financial state and you won’t be able to travel elsewhere while applying because the embassy will take hold of your passport.

Worse still, you’ll have to wait for one embassy to grant you a visa before you can apply for the next one, and they all have different timelines for coming to a decision. The UK Embassy, for instance, takes about a week, but I’ve heard that the Spanish and Italian Embassies tend to keep you waiting for an entire month.

“Let’s go to Paris for the weekend!” Right, in your dreams.

2. You will always have to prove that you are “good enough” to visit certain countries, but the reverse doesn’t apply

There is only one kind of tourist that first-world countries would grant visas to with no reservations, and these are the loaded ones who can infuse the local economy with the money they earned in their home countries. So, being able to present bank statements, asset holdings, and employment certificates with eye-popping personal income figures not only means that you have a cushy life you’re not planning to give up just to be a dishwasher-in-hiding in Australia or the US, but that you’re probably bent on spending a lot of it shopping in a foreign country. *Insert the sound of cash registers ringing up here.*

It wouldn’t be so bad if it was equally hard for the citizens of such countries to enter ours, but that’s not the case. Because virtually anyone can visit the Philippines and the surrounding countries, there has been a rise in the number of “begpackers,” a term coined for white tourists who busk and beg their way through Southeast Asia (never mind that they’re begging from passersby who are probably poorer than they are) all in the spirit of #YOLO.

Let’s not even talk about how easy it is for Caucasian pedopohiles to set up shop here.

3. Even with a valid visa, you can still be refused entry to a country at a border officer’s discretion.

So, you finally got your visa. Congratulations! This means your country of destination should just about welcome you with open arms, right?

Wrong. In the US, for instance, border policies are currently in a state of chaotic flux, so it’s not too uncommon for legitimate travelers and even legal residents to be turned away after touching down at the airport. The current government’s push against terrorism and radicalization also means that such a scenario is more likely for citizens of countries associated with Islamic terrorists, such as Afghanistan, Iraq, and oh, the Philippines. (Thank you, Trump. Not.)

To be clear, this isn’t to put the sole blame on our government for our passport’s significant limitations. The visa system was outwardly designed as a barrier against terrorism and to deter against overstaying immigrants (i.e., what we call TNT or “tago ng tago” in the local vernacular), but it hasn’t really been effective on both counts. The US, for instance, has a notoriously low visa approval rate, but this hasn’t exactly managed to prevent terrorists from wreaking havoc on their country.

Instead, the visa system has mostly served to subtly reward citizens of rich countries with near-unrestricted access to just about anywhere in the world. Inversely, it penalizes those from less developed nations with a long, humiliating, and mostly unnecessary application process.

Now, we are not advocating that international borders should all of a sudden be thrown open, but maybe it would be better if everyone’s travel, immigration, and crime records be kept in a global database that could be pulled up at border offices instead, sort of like a visa upon arrival. It would admittedly take more time to set up, but it beats having to collate endless copies of your bank statements and filling out questionnaires that ask you if you’ve ever committed a crime or a terrorist act.

Honestly, though, unless visa restrictions are modified accordingly, perhaps we Filipinos are better off taking our considerable tourist PHP’s to friendlier nations in the meantime, no?