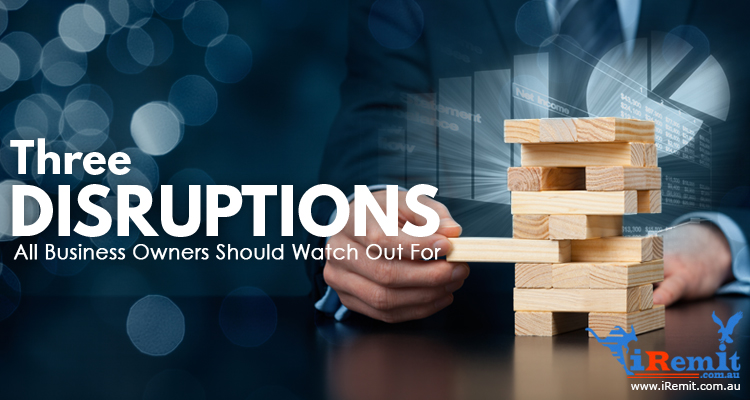 3 Disruptions All Business Owners Should Watch Out For

“Change is the only constant thing in this world,” so the old chestnut goes.

It’s equal parts frightening and exciting, certainly. On one hand, a world where everything is predictable sounds quite stagnant and frankly, boring. However, the uncertainty that comes with change doesn’t always feel too comfortable either.

Even big businesses aren’t immune to the vagaries of the future, it seems. PLDT, for example, used to derive a good chunk of its revenues from overseas calls. With so many Filipinos working abroad and calling their families back home quite frequently, the business model seemed perfectly sound and sustainable.

And then communication platforms like Skype and Viber came along offering free chats, calls, and even video conferences with anyone who can access the Internet. All of a sudden, the telecommunications giant’s profits started to decline, forcing them to look elsewhere to make up for lost sales.

Furthermore, BDO Unibank Chairperson Teresita Sy- Coson actually mentioned obsolescence and how to prevent the SM Group from falling prey to it as her top concern, particularly when it comes to dealing with three kinds of disruptions:

Quick, when was the last time you bought or paid for something online? Chances are, it was probably within the last 24 hours.

These days, you can purchase anything from industrial strength cockroach killer to Korean skin care serums online. Not only is this more convenient as you can do it at any time of the day, but it’s often less costly as online sellers aren’t weighed down by overhead expenses like rent, utilities, and labor.

With the Internet making it possible to do all sorts of tasks with the touch of a button, many brick-and-mortar shops are feeling the pinch. After all, why should customers seek them out when they can get the same goods just by turning on their smartphones and laptops?

The key, of course, is to develop an online presence and to take advantage of the shipping options offered by several logistics companies. In doing so, one can service customers that aren’t in their area and extend their brand’s reach as a result.

Unless you’ve been living under a rock (lucky you, in which case), you’re probably familiar with Brexit, North Korea, and well, Donald Trump, specifically the sort of shockwaves these issues (yes, I consider Donald Trump to be an issue) have been causing worldwide.

Geographical proximity and political stability are both macroeconomic factors, but they can still trickle down and affect small and medium enterprises nonetheless.

Consider the issue on immigration. Given how countless Filipino households and families have grown dependent on OFW remittances, a decline in the population of overseas workers due to more stringent immigration policies will certainly affect the local economy in more ways than one. It definitely won’t be good for the remittance industry (yikes) and the influx of ex-OFW’s sent home could cause an oversupply in the job market. These things are just for starters, but they will have an impact on the consumers’ buying power, making them less likely to patronize small-medium businesses.

The ASEAN integration is another event that could potentially be disruptive. While we can all benefit from a world with less borders, the entree of foreign businesses with better services and more updated technology can threaten the very survival of local enterprises.

….unless they force themselves to innovate and thus meet such a challenge head-on, of course.

2017 is coming to an end, and we’ve seen some pretty strange weather patterns (e.g., scorchingly-hot summers, typhoons that come out of nowhere, etc.), yet people are still vehemently denying that global warming is very much upon us. Go figure.

I like to think of climate change as Mother Nature’s way of reminding us just how little control we have over the world. Sure, we can build all sorts of great monuments, establish companies that endure for centuries, and I don’t know, come up with more ways for the Kardashians to profit off our boredom and existential crises, but all these things can and will disappear once all the polar ice caps have melted into an Earth-sized puddle that drowns us all.

It’s a bleak outlook, but here too, lies an opportunity. As the world and its governments becoming increasingly and painfully aware of the doomsday clock ticking away, businesses can focus on making their products and services more sustainable and environment-friendly.

Besides, there are already lots of laws and regulations heading in that direction already. Might as well.

The forecast for the future might look as dreary as those dystopian young adult novels that are all the rage now, but it helps to remember that the word “entrepreneur” originally meant “problem-solver.” Long story short, wherever there is a problem, there is also an opportunity.

That’s something worth remembering in these troubled times, don’t you think?