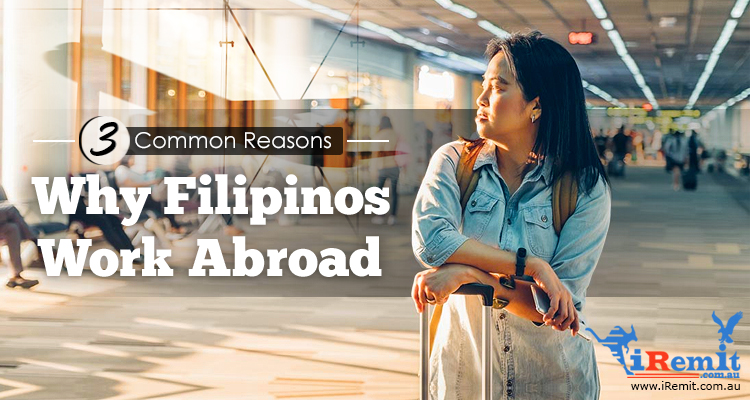 A lot of Filipinos are leaving the country to work abroad.

Whether it’s their own choice or just “forced” to leave for their loved ones, here are the top 3 reasons why:

When the pay is high, there is a great chance for Filipinos to send more money to the Philippines.

Truth hurts but working in the Philippines would make you become poorer than what you are now, the salary of the workers even if graduated from a very prestigious school has a low bracket compared when you are working abroad.   Even sought after and demand jobs in certain parts of the world like nurses, engineers, and teachers are paid poorly when working here in the Philippines.   Many professionals would prefer to work abroad as domestic helpers or office clerks and leave their teaching jobs because there is a great possibility of getting a higher salary and income and that would mean they can send money to the Philippines more often for their loved ones left behind.

2. Unstable economic condition in the Philippines

The wobbling economic condition and political situation in the Philippines is one of the main reasons why Filipinos work abroad.

They cannot see any light at the end of the tunnel, others see it a hopeless case.  Let’s face it, we hear the news everyday, wherever we are, we can hear what is happening to our country.   Fact, our country is governed mostly by dishonest, corrupt and unserious officials seated in government positions voted by the Filipino citizens to look after the welfare of the Filipino people but instead they are ripping the people’s money for their own benefits and interest.   It is a common awareness that having a corrupt government, mismanagement of the country’s assets, gross inefficiency in government functions and many others that hinder the entire country from development due to self-interest and greed, what else can we expect from these?   Each Filipino citizen will always be frustrated with such condition for we know that we will not grow if our government will continue these circumstances.

Every year many eager graduates from college joined the Philippine workforce thus stiffing the competition of landing to more compensated jobs, some Filipinos end up acquiring work from factories or manufacturing firms for the purpose of having experienced or no other choices for other job positions.

High unemployment rate and fewer job opportunities for new graduates are unending problems in the country each year.   With such high competition for a career opportunity, some applicants are desperate to have a job that they are willing to get paid for lower salaries and not enjoy benefits as long as there is a security of tenure.   Sad to say, these will make most of the employers and businessmen grab such inequitable condition that keeps their businesses save labor cost and earn more profit.

Although working abroad is very rewarding, there is also the downside of working in a foreign land.

The loneliness of being away from your loved ones, the discrimination from overseas employers, and the high cost of living abroad is very sacrificial for OFWs.