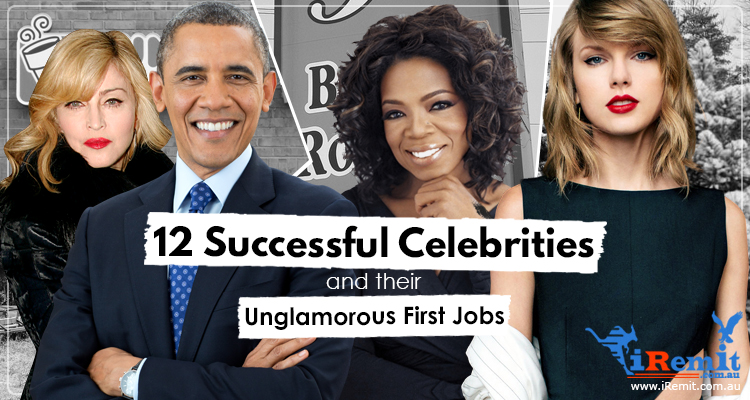 When you see the world’s richest and most successful people peering up at you from the front pages of magazines and newspapers, it’s easy to imagine that they probably live in a completely different world than we do. And in some ways, I suppose that’s true. When your bank account looks more like a mobile phone number, you’re not likely to be besieged by working class concerns like making ends meet and paying off student loans.

But it wasn’t like that for a lot of bajillionaires. In the US alone, it’s been estimated that 62% of American billionaires are self-made. When you look at the biographies of their counterparts across the globe, it’s the same story. These people all started somewhere, and most of the time, they did so from the bottom of the ladder:

Before he became the leader of the free world, the former POTUS worked the scooping counter at the local Baskin-Robbins.

“You have to put on this hazmat suit and then shimmy through this little tunnel that you can barely fit in. If you stay in there for more than 30 minutes, you get too hot and die,” so goes the Tesla and SpaceX founder’s description of his first job as the janitor of a boiler room at a lumber mill.

Worth an estimated USD 61.2 billion dollars, the Oracle of Omaha, as Buffet is often called, is a mainstay on the world’s richest list year after year. His fortune has been made largely on smart investments in the stock market, but he started accumulating his wealth at the ripe old age of 13.

As a teenager, Buffett would deliver copies of The Washington Post throughout the neighborhood. Apparently, he was able to save up enough to invest in 40 acres of farmland after a considerable amount of time, and the rest, as they say, is history.

The talk show’s phenomenal success is made all the more astounding by the fact that her beginnings made such an outcome highly unlikely. Oprah was the child of teenage drug addicts, suffered sexual abuse in her youth, and was even told that she was “too boring for television.”

Now, Oprah’s media empire has made her the first female black billionaire with an estimated net worth of over USD3 billion. She’s certainly come quite a long way from working at the corner grocery store next to her dad’s barbershop as a young teenager.

Arguably today’s most successful popstar, Taylor Swift once worked at a farm knocking praying mantises out of Christmas trees. One time, thousands of them apparently hatched all over people’s houses because she forgot to check, and they had to drive them out without killing them so that they wouldn’t ruin the holiday for the little kids in the background.

Makes you wonder what kind of chart-topping song she could make out of that scenario, eh?

Like a lot of teenagers, Amazon.com’s founder worked as a cashier at McDonald’s. Far from being ashamed of it, Bezos always recounts the experience as both incredibly fun and educational. He often credits his then-manager as an excellent leader who kept the teenagers under his watch focused even as they enjoyed themselves on the job.

The man behind Dell computers got his first job scrubbing dishes at a Chinese restaurant when he was 12 years old. It seems this was also where he picked up some great insights into customer service, as he remembers his first boss as a restaurant owner who took pride in his work and showed great care towards every customer who came in through the door.

Yahoo’s CEO first had a taste of working class life when she took on a summer job as a grocery clerk in Wisconsin. Like many of the people on this list, Mayer learned a lot on the job: the importance of speed, the trade-offs people often have to make in everyday life, and the value of a good work ethic.

Albright was a Czech refugee who became the first female Secretary of State in the United States, but her first job involved selling bras at a department store in Denver, where she allegedly made next to nothing, but picked up skills for dealing with people in difficult situations.

Netflix’s CEO not only valued his first job, he actually LOVED it. On being a vacuum cleaner salesman, Hastings was quoted saying, “I loved it, strange as that might sound. You get to meet a lot of different people.”

Trump’s self-declared archrival was one of those teenagers who asked his parents for new trainers and got told to earn enough money for it instead. The only difference is, he actually went and did it.

Cuban’s father apparently had a friend who overheard their little father and son conversation, and offered to let the young whippersnapper sell his garbage bags. The future Dallas Mavericks owner then went door to door going, “Hi, does your family use garbage bags?” and making USD3 per unit that he was able to sell, being very much the born salesman indeed.

It might be difficult to imagine living your dreams when you’re currently stuck in a menial job or a minimum wage 9-to-5, but as the individuals above have proven, it’s certainly not impossible. With good old hard work and the ability to learn from every experience, making it to the pinnacle of success in your chosen field can very much be within anyone’s reach.