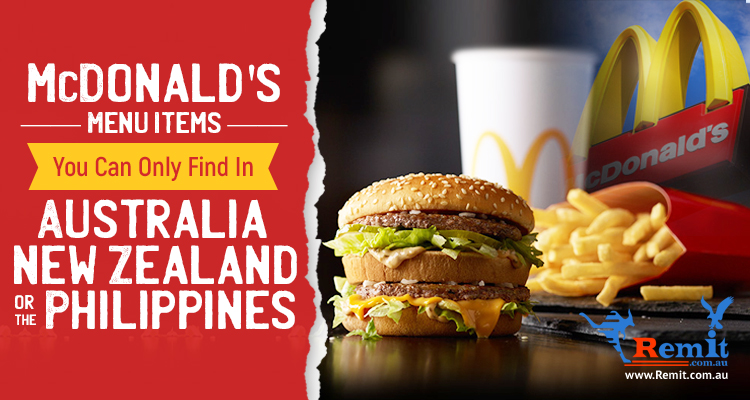 By Serena Estrella in Food and Drink
September 24, 2018

12 McDonald’s Menu Items You Can Only Find In Australia, New Zealand, or the Philippines

It’s easy to make fun of Western tourists who travel to exotic places yet opt to take their meals at McDonald’s. You can’t exactly sample the local fare at the neighborhood’s Golden Arches, right?

Don’t get me wrong; flying over to the other side of the world and then eating nothing but McDonald’s would be such a wasted opportunity. Getting a taste of as many regional delicacies as you can is all part of the traveling experience, after all.

Still, that’s not to say that McDonald’s serves the same fare the world over. Part of what makes the brand so powerful lies in the company’s ability to make certain adjustments to cater to the local tastes in each country.

For instance, you can only find the following menu items in Australia, New Zealand, or the Philippines:

Fried chicken with gravy and rice was added to the Philippine menu to compete with the nation’s largest fast food retailer’s (usually presented in the guise of an upbeat, perennially grinning bumblebee) legendary Chickenjoy.

Surprise! This pasta offering can be found not in Italy, but in the Philippines! That’s probably a good thing, though, as this dish’s soft noodles and sweet sauce (complete with hotdog slices!) would probably horrify any bonafide Italian.

As you may have guessed, the sauce was purposely sweetened to appeal to the Filipino palate. Hotdogs figure in McSpaghetti as they’re reminiscent of the pasta dishes served at children’s parties, what with the processed meat being especially effective as an extender.

And for those of us who like this delightful abomination of an Italian classic with a bit more heft, McDonald’s Philippines also serves a Chicken McDo and McSpaghetti combo.

Asians are known for being partial to rice over any other carbohydrate, so it was only natural for McDonald’s to come up with a burger that had the soft, white grains sandwiching its burger patties in lieu of the usual buns.

Strangely enough, the Rice Burger had mixed reviews, and eventually ceased to be a mainstay on the menu by 2006.

An amalgamation of “burger” and “pan de sal,” this features a burger patty in a toasted pan de sal, which is a Filipino breakfast staple often served toasted with butter.

These curly fries are a seasonal menu item that McDonald’s diners often go mad for. Apart from their whimsical shape, these taters are prized for their savory and highly-spiced seasonings.

NZ’s 8th most popular burger includes a beef patty with tomatoes, lettuce, cheese, onion, beetroot, ketchup, and mustard, along with an extra McMuffin egg. It’s said to be identical to Australia’s McFeast Deluxe, except for the additional egg.

Georgie Pie actually started out as a local brand famous for its meat pies before stiff market competition forced it to close down back in 1998. McDonald’s then acquired and converted about seventeen of its outlets into fast-food eateries. Eventually, the company also decided to adapt some of its great-tasting treats, most notably the Georgie Pie Steak Mince ‘N Cheese, which has New Zealand Angus Beef and cheese loaded into an extra-crispy crust.

The OG Kiwiburger (again, except for that extra egg), the McOz’s inclusion of beetroot in its filling made it uniquely Australian. It’s had quite the run, however, having been introduced in 1999, discontinued in 2008, and then reintroduced back in 2011.

An Angus beef patty, shaved parmesan, a rasher of bacon, spinach leaves, and a “hint of truffle” makes this burger every bit the gourmet offering its name makes it out to be.

Exclusive to Australia, these fries are drizzled with truffle-flavored mayonnaise and sprinkled with Parmesan cheese, and are supposedly a hit among children. (What is it with Australia and truffle-flavored stuff?)

Another luxe offering, this hefty meat sandwich was even promoted by country singer Lee Kernaghan throughout its run.

This has got to be the motherlode for any die-hard McDonald’s fan. Maccas’ (as McDonald’s is known colloquially Down Under) McFavourites Box (gotta love that British spelling) is perfect for the diner who wants a little bit of everything.

(Gosh darn, why don’t we have this in the Philippines?!?)

There we have it, should you find yourself in Australia, New Zealand, or the Philippines and somehow have no other option rather than to eat at McDonald’s, you may want to try ordering any of the items listed above in lieu of your usual Big Mac with fries.

Otherwise, go for the meat pie, pavlova, or adobo instead. Seriously.